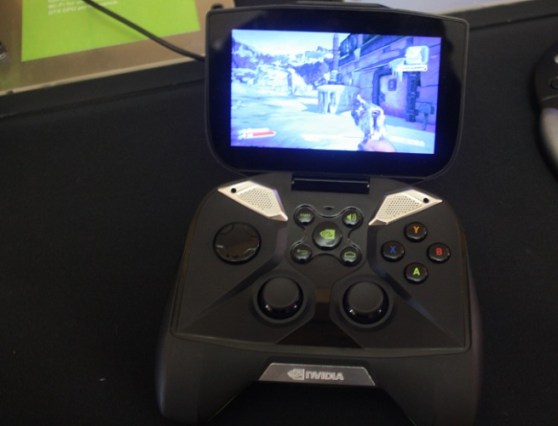 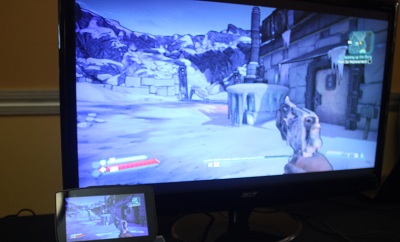 Jen-Hsun Huang, CEO of the world’s biggest standalone graphics chip maker, said in a speech today to investors that Nvidia is targeting Project Shield — a game controller with a 5-inch screen attached — at the most enthusiastic gamers on the Android platform.

He also noted that Nvidia has invested around $10 million in the project. That’s similar to the $8 million-plus raised via Kickstarter for the Ouya microconsole, but it’s also a lot less than major home console makers spend on a launch. On the other hand, Nvidia spends $880 million a year on the core R&D behind its chips and $300 million more on Tegra itself. All of that money makes it easier to launch Project Shield.

He did not share many other details. He said that Project Shield will “hopefully be on shelves by the end of Q2. It is going into production soon.” 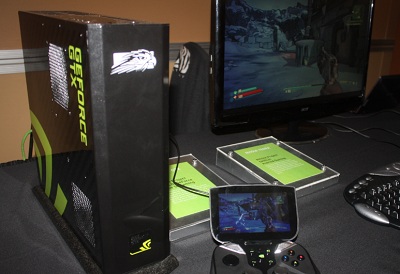 Project Shield lets players enjoy free-to-play Android games on a big screen TV by connecting the Shield device to the TV via a HDMI cable. The aim is to bring the disruptive power of an app store full of free-to-play games to the television in direct competition with $60 games.

With Shield, you can play PC games — like those from the digital distribution service Steam — on the TV or its small portable display. The PC does the hard work of processing the game, using a GeForce graphics processing unit (GPU). It then displays the image on the TV or monitor. Then you can control the game with the Project Shield controller. The PC can also use Wi-Fi to stream the video of the game to the Project Shield screen.

I played the PC version of Borderlands 2 on the Shield today, and it worked great. The graphics are top-notch, and they look good on both the TV screen and the small screen. That capability to play PC games is an edge that Shield has over the likes of Moga, Green Throttle Games, and other devices that can only play Android games. Project Shield is also a good match in this respect for the PC-focused Razor Edge, which Razor will sell for $1,200 or more. You can bet that Nvidia isn’t going to be charging that much for Project Shield. (It has not announced a price).

Nvidia hasn’t announced any Project Shield exclusive games yet — nor has it announced any games at all. On the other hand, it doesn’t have to. It can run your existing collection of PC and Android games.

Project Shield will use Nvidia’s latest Tegra 4 processor, which is going to have PC-like graphics performance. Shield can also tap games that are available on Android in Nvidia’s Tegra Zone game portal. It’s cool to get Android games in the living room. But Huang said that “Android is not just a mobile operating system. It is a computing system.”

Tegra Zone’s user base has grown by 80 percent over the year, said Phil Carmack, head of Nvidia’s Tegra business. Carmack noted that 76 percent of revenue in the Google Play app store is now coming from games.