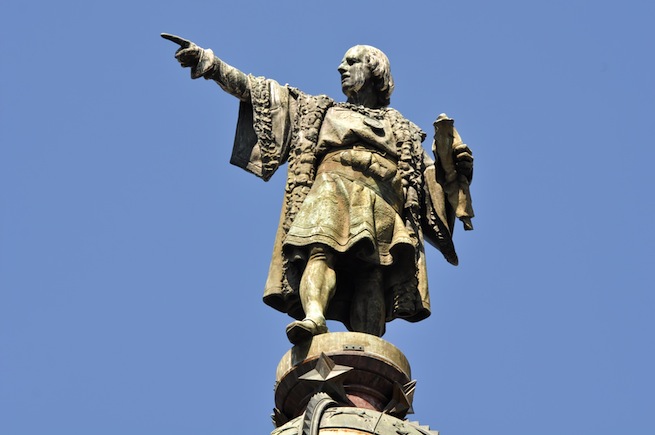 This is a guest post by GoodData CEO Roman Stanek

For everyone giving European entrepreneurs a hard time, consider this: Christopher Columbus created a model for the modern entrepreneur to follow.

Columbus spent seven years pitching his business plan to Genoese bankers (the world’s first angel networks) before convincing Castile’s King Ferdinand and Queen Isabella to fund his crackpot scheme. He underestimated the risks of the voyage — stocking only 60 days’ worth of food and water. And he had the confidence to turnaround a mutiny when common sense told everyone else to quit.

Rational people don’t take these risks. Entrepreneurs, on the other hand, thrive off of them.

Over the years, I’ve realized Columbus was the entrepreneur’s entrepreneur — with the same personality traits that, for better or worse, we all share. I also recognized that insight into his personality can give all entrepreneurs greater understanding into their own motivations, enabling them to chart their own course to success.

So here are four lessons entrepreneurs can learn from Columbus.

Columbus had the superhuman confidence he needed to raise the funds for his venture. His conviction that he could reach Asia by sailing west into the unknown, (at a time when sailors still hugged the shore), eventually persuaded Ferdinand and Isabella that a new route to Asia would disrupt Portugal’s monopoly on Asian exploration and give Spain new sources of commerce.

Today, that same self-assurance helps all entrepreneurs raise money. In fact, I’m convinced that the higher your confidence, the more likely you are to attract bigger valuations, build larger companies and gain customers.

Like all entrepreneurs, Columbus also miscalculated the risks of his westward voyage, assuming the earth’s circumference to be only about 18,000 miles. This might surprise some, but I believe this is a critical component of an entrepreneur’s personality.

We constantly underestimate the risks involved when we start our ventures. It’s a kind of cock-eyed optimism that enables us to tackle hurdles when the more-cautious around us tell us we could never succeed. More than that, it pushes us and the people around us to achieve the impossible — much the way Steve Jobs’s “reality distortion field” drove colleagues, partners and suppliers to create insanely great products.

Lesson #3: Your belief in yourself is contagious.

An absolute faith in our vision also defines us as leaders. With it, for example, Columbus fended off a near-mutiny by convincing his crew that newly sighted birds and floating vegetation meant Asia was (literally) over the horizon. This may have been the first case in history of an entrepreneur being able to pivot a venture to capitalize on changing conditions. Today, every entrepreneur I know possesses this certainty to some degree.

It’s that certainty — in ourselves and in our vision of what the world will look like in six months or six years — that makes us successful leaders and able to rally our teams in adversity, drive them to excellence and attract customers.

The traits discussed above clearly define today’s entrepreneur. But I also know that the quintessential startup personality isn’t enough for success. Founders also need a deep understanding of the technologies and markets they aim to disrupt. Five hundred years ago Columbus was a navigational genius who understood the westerly Trade Winds better than just about anyone else.

Today, technical entrepreneurs have similar advantages. Andreessen Horowitz says they always invest in technical founders because they have the knowledge, the commitment, and the passion to achieve their goals. That’s especially important in the tech industry, where there’s a new trend almost everyday, and you can’t rely on business advisors to tell you how to steer your company. Instead, it’s for us to suss out which steps hold promise and which will lead to disaster.

Sadly, that’s where Columbus got it so terribly wrong. Despite his glowing reports back to Spain, Columbus had no riches to send back from the New World. In desperation, he forced Native Americans into slavery to dig for gold. And he was hated for it. Entrepreneurs can learn from that, too, and make it a point to never act out of fear.

Columbus might not have been the great hero that early history books make him out to be. Even so, I praise him. By charting a route to the New World, he showed that confident entrepreneurs willing to take great risks — and who can pivot at a moment’s notice — can achieve world-changing disruptions.

Isn’t that what being an entrepreneur is all about?

Roman Stanek is the founder and CEO of GoodData, a company that offers a range of business intelligence software and reporting tools to help companies monetize big data. Prior to this, he was the founder of NetBeans.org, sold to Sun Microsystems, and Systinet, which was acquired by HP. Follow him on Twitter @RomanStanek