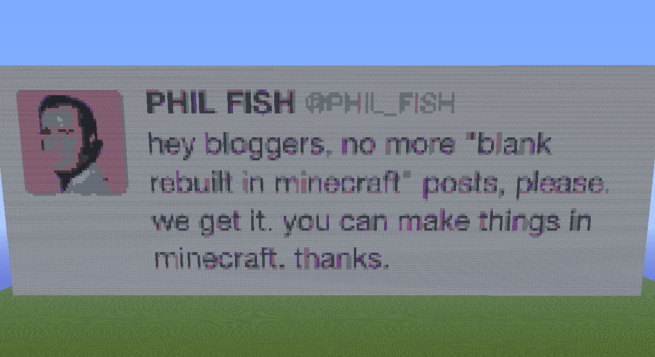 Blogging about games has its share of common tropes. We love top-10 lists and giving out year-end awards, but one in particular is so common that it’s driving developer Phil Fish a little nuts.

Last night, Fish (designer of mind-bending puzzle platformer Fez) tweeted his annoyance with gaming blogs that continue to post about pop-culture icons re-created in the block-building game Minecraft. For example, this post about a bunch of gamers that built the various realms of author George R.R. Martin’s A Song of Ice and Fire in the popular indie title.

hey bloggers, no more “blank rebuilt in minecraft” posts, please. we get it. you can make things in minecraft. thanks.

Naturally, the Internet didn’t miss the opportunity for a clever (or obvious) joke about Fish’s feelings.

Gilmartin has made the schematic available for download for those who want their own Phil Fish tweet in their Minecraft world.

Yes, we’re fully aware of the irony of this post.