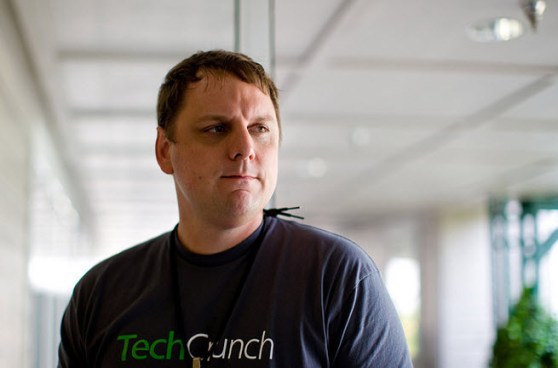 TechCrunch founder and tech investor Michael Arrington disputed allegations that he raped his former girlfriend, Jenn Allen. In a post on his Uncrunched blog, Arrington posted a letter from his lawyer to Allen, the founder of the tech startup RTist, demanding that she retract her allegations or face legal action.

The public battle between a media/angel insider and a startup founder has divided the Silicon Valley community, with public figures who are friends of both parties taking sides. And since both parties are active on the Internet — Allen has been posting on Facebook, Twitter, and Gawker story comments while Arrington has now posted twice on Uncrunched — the whole ugly affair is playing out in a public forum.

Arrington founded the tech blog TechCrunch and rose to prominence as a brash blogger. He sold the site to AOL in 2011, and he left after a public dispute with Arianna Huffington, whose Huffington Post was also acquired by AOL. Arrington left to run his venture capital fund, CrunchFund. In that position, he became an influential voice and a power broker, but he also made enemies. A number of people have spoken out about Arrington and Allen, voicing their opinions as to whether Arrington appeared to be abusive toward her or if they ever saw evidence of such behavior.

In the letter to Allen from lawyer Eric M. George of the firm Browne, George, Ross stated, “You have posted statements about Michael that are false and defamatory, and that have caused significant harm to his good name. It is my hope that you immediately will take corrective action, by retracting those statements.” George gave Allen a deadline of Monday before taking unspecified legal action.

The letter claimed that Allen’s allegation that Arrington raped and physically abused her was “impossible.” She posted on April 1 on Gawker that “he did rape me, on March 5 last year, when he invited me over to make amends from a major catastrophe a couple months prior.” But the letter said that Arrington was in the state of Washington (where he relocated in 2010) and she was in California. The letter said Arrington’s whereabouts are confirmed by travel records and credit card statements, and a photo posted of her at a party in San Francisco that evening shows that she was in California. That photo was posted online but was removed in the past several days, the letter said. The letter also claims that Allen repeatedly tried to contact Arrington after the time of the alleged rape. The photo at left was reportedly sent by Allen herself after the alleged rape. The letter also alleges that she faked news that he had gotten her pregnant and planned to get an abortion. 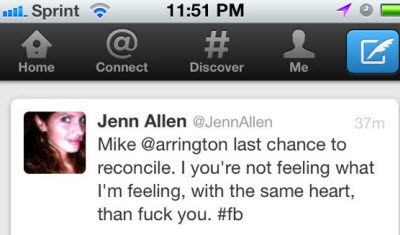 The allegations about physical abuse emerged in the press in a Gawker story on April 1, when the online news site reported on comments that Allen posted on the physical allegations on her status update on Facebook to more than 4,500 Facebook subscribers. Allen claimed in her post that she had loved Arrington for more than eight years, and evidence suggested they dated in 2006, based on Gawker’s research. But Arrington also had a public relationship with Meghan Asha, a Silicon Valley insider, in 2008. Allen became CEO and founder of RTist, an online art gallery, in 2010. After the April 1 Gawker story ran, Allen posted that Arrington did “rape me, on March 5 last year” in her third comment on that post.

For the media, the question became whether to write about unfounded, potentially libelous rumors about one of the tech blogging world’s best-known voices. Adrian Chen of Gawker, who wrote the first story about the allegations, taunted other blogs on Twitter, saying the “race is on to be the last tech blog to pick up the Arrington story.” The suggestion was that other blogs were afraid to write about Arrington, who wields considerable power with his own pen. Jason Pontin, editor in chief of MIT Technology Review, replied, “We win then.”

The story continued to grab headlines as TechCrunch itself published a story about its founder. It investigated claims that Arrington had a history of abuse and found nothing incriminating. Gawker also followed up with a post digging into Arrington’s past. Jason Calacanis, Arrington’s former business partner who had a very public split with Arrington in 2009, said he had heard “story after horrific story” about Arrington’s behavior. Loren Feldman, another former friend of Arrington’s, also publicly said he had heard allegations of abuse before about Arrington.

Arrington stayed quiet during most of the fighting, with Allen or Arrington supporters battling each other on the internet by proxy. Some tech publications covered the matter in great detail, while others chose not to write anything.

The letter from Arrington’s lawyer  includes as exhibits testimonials from Arrington’s friends. Heather Harde, who was the TechCrunch CEO alongside Arrington, said in the letter that “I would have detected patterns of abusive physical behavior if they had been present.” Nik Cubrilovic said he lived in the same house the entire time that Arrington dated Allen and that he “never once saw even a hint of physical abuse, let alone rape.” Gabe Rivera, founder of Techmeme (and former roommate of Arrington), also said he never saw any “physical threats or harm” directed by Arrington against anyone.

Spectators continue to take sides in the wake of the letter’s posting.

If Arrington’s lawyers hoped that the letter would silence Allen, they were wrong.

In response to Arrington’s letter, Allen wrote a number of messages on Twitter, “@arrington You know everything I said and posted is truth and true. How can you do this to women and lie to everyone. Reflect for once.” She also posted a lengthy reply on Facebook, lashing out at Harde for supporting Arrington. She also apparently changed the date of when the rape took place. She now says in a tweet (see below)  that it took place on March 30, 2012, at 130 am, near San Francisco International Airport at a hotel.

@arrington You know everything I said and posted is truth and true. How can you do this to women and lie to everyone. Reflect for once. #fb

The full text of the letter is here.

Disclaimer: VentureBeat has had partnerships with Arrington and his former company, TechCrunch, on events such as the Crunchies awards.