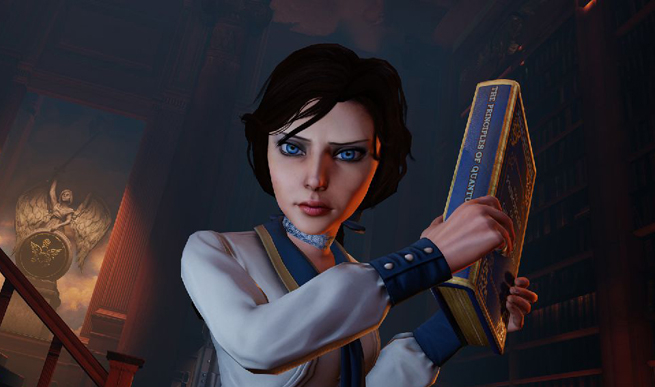 BioShock Infinite is one of those rare games that has everything: a great story, intriguing characters, a beautiful virtual world, and lots of action. Evidence suggests that sales are soaring and that people are actually finishing the 12-hour game. It has a wonderful story, with an ending that is generating huge conversations on the Internet. The main characters and the relationship between them are far more interesting than the combat scenes that, as fun as they are to play, pale in comparison to the drama and mystery.

If you haven’t finished the game, you’ll have to cover your ears when you pass by any two gamers gathered together. People can’t stop talking about it with others who have finished the game. I watched helplessly as one person spoiled a big piece of the game for someone who hadn’t finished yet. This game has some plot twists and scenes that resonate with you long after you’re done with the game.

Oh yeah, BEWARE OF SPOILERS in this column. The rest of this column is dedicated to convincing you that should play this game or at least be aware of it because it has that rare chance of becoming a cultural phenomenon. 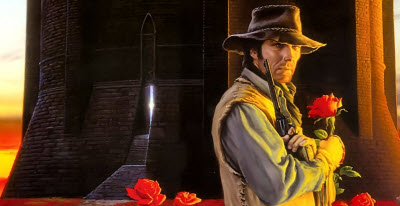 I’ve finished the game and thoroughly enjoyed it, but I was also disturbed by the level of violence. I can handle it, but I wouldn’t recommend it for the faint-hearted. That said, the experience of BioShock Infinite has fully restored my faith in the triple-A hardcore game.

At a time when snack-like mobile games are pulling us away from the big-screen games, this title held my attention and made me feel like I was immersed in another world. In fact, I consider this game to be one of the rare works of art in a video game. I’ve pulled out this “art” word before, when I’ve written about games like Journey, Alan Wake, and others.

With its mind-bending ending, it reminds me of books like Stephen King’s The Dark Tower series (pictured) and movies like Terry Gilliam’s Brazil or Christopher Nolan’s Inception. Sometimes I pull that “art” word out too readily. But I mean it this time. Before I got to the ending, I wouldn’t have said that. But after you experience the ending, so much of what happened before in the game comes rushing back to you — an effect that is not unlike the point in the original BioShock, when you discover something about your identity as the player of the game. BioShock Infinite is a lot like that in the feelings it evokes, and it belongs in the company of great tales, no matter the medium.

You could build a cottage industry around its critical interpretations or teach it in a college English class. At a time when game publications are on the ropes, BioShock Infinite provides a ton of fodder for analysis on topics ranging from its anachronistic music to the subject of false choices. Like a school boy, I want to understand the intricacies of the story that link the final scenes with early scenes, figure out the meaning behind the deliberate mysteries, and learn what the game designers really intended for the players. This game brings out the old English major in me. That’s refreshing. 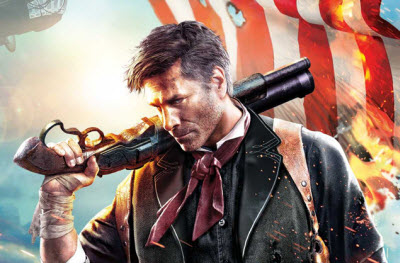 Ken Levine, the mad genius at Irrational Games, took more than five years to realize his vision. But he created a world in the floating city of Columbia in turn-of-the-century America that grabs you and draws you into it. It’s too bad that Roger Ebert, the longtime film critic who insisted that video games can’t be art, passed away this week and didn’t get a chance to play this game. This game is good enough to lose yourself in it. And once you’ll come out, you’ll want to talk about it with someone else who has finished it. I want to talk to Ken, dammit. Pick up the phone!

It’s hard to explain what art is, but you sort of know it when you see it. When I was walking through the statues and gardens of the lost First Lady, listening to opera music in the soundtrack, I felt admiration for Levine’s artistry. It was so beautiful that I just wanted to sit on a bench and look around at the city before it became a ruin.

But the limitations of video games as a medium are clear with this game. The violence is so extreme that I can’t show it to a lot of people I would like to share it with. The problem with BioShock Infinite is that it won’t reach the largest possible audience because of the constraints that rein in its mass appeal. It is an exceedingly violent game, much like the first two BioShock titles — full of dripping blood, decapitations, burning bodies, and other horrors.

This points us to a trap. Levine took five years and a huge budget to make BioShock Infinite. He could only do that if that game had a core base of fans who were guaranteed customers. And the only real games that have such fans are first-person shooters. So Levine had to make a shooter game, but that trapped him. He couldn’t take this game into a broader audience because of the violence inherent in the shooter genre. GamesBeat writer Rus McLaughlin has his own view that the context of the game justifies the violence.

I find a need to explain my fanboy love. The title is so creative. Columbia floats in the clouds, and it has some wonderful creations like the rails that you hang on to travel between the levitating buildings. 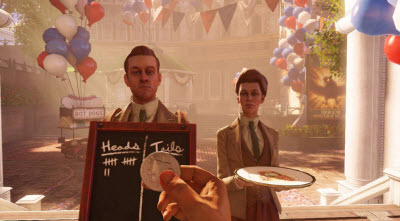 The game has meaning in every scene and image. In the beginning, many of these scenes are mysteries. You don’t know anything about your identity in the beginning except that you are Booker DeWitt and your mission is to “bring us the girl, and all debts will be forgiven.” Those debts don’t have anything to do with money. At Wounded Knee, DeWitt, accused of having “teepees in his family tree,” became a savage murderer of women and children. He seeks a baptism to absolve himself — in a scene and a theme that will come back over and over, like a ghost that won’t die.

It almost seems unscripted, yet a strong sense of deja vu is layered into the game at every point. The conversations are deep, and the writing is good. At one point, Booker DeWitt (pictured with shotgun) asks Elizabeth about the monstrous Songbird. “What did that thing do to you?” She replies, “If he were to take me back, that’s death, Mr. DeWitt, or something so like it I cannot tell the difference.” At another point, Elizabeth asks, “Booker, are you afraid of God?” He replies, “No, but I’m afraid of you.”

The humor and mystery of the Lutece twins (pictured with quarter) will entertain you and drive you mad. They impart many of the threads in the plot that help you unravel what is going on. And they provide geeky comic relief amid a city full of racism, white supremacy, and religious fanaticism. When you finish the game, everything that they say starts to make sense.

Like King’s The Dark Tower series, the game has a lot of literary references, evoking works such as the play Rozencrantz and Guildenstern are Dead or Shirley Jackson’s short story The Lottery. A single red rose, which is prominent in The Dark Tower series, appears in this game. There are references to history like the Boxer Rebellion and the massacre of Native Americans at Wounded Knee. The game takes on the issue of racism and what it becomes when taken to its logical extreme. These aren’t just pedantic. They add a layer of meaning that helps you understand the context for the tale, much like the myth of Atlantis and Ayn Rand’s Atlas Shrugged informed the player about the underwater city of Rapture in the original BioShock.

By no means is this game perfect. The art choices are sometimes perplexing. The robot-like Patriots bear the face of George Washington, yet they’re supposed to be the most menacing enemies in the game. (They were virtual tour guides, repurposed as Terminator-like robots to crush the Vox Populi rebellion). And, like I said, the violence is horrendous, but the game doesn’t have the same suspenseful horror that the original BioShock had in droves.

Having played the game, I have a hundred questions about what it all means. Looking at the chatter on the Internet, it amazes me what fans have figured out through a kind of crowdsourcing of critical analysis.

If I had a chance to ask the Lord Creator himself, Levine, about anything, here’s what I would want to know. 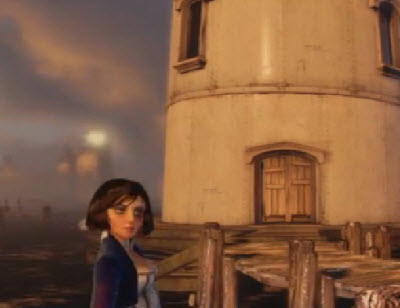 Why do we see the same images and scenes over and over, like the lighthouse, the red chair, the Songbird who arrives at the worst possible times, and the rose? Why is there so much drowning? The details in the game just raise more questions. Why does Elizabeth hit Booker DeWitt with a book on quantum physics (pictured at top)? Why do the tears (or something else) give Booker a bloody nose? How do we keep straight which “tear” we are in at any given time? Who put Cyndi Lauper’s “Girls Just Want to Have Fun” song in the game? Why does Rapture reappear? What really happened during those baptisms? What is a Beach Boys song in this game?

The ending of the game isn’t what I would call satisfying. It provides you some answers, but it will not make you happy or fulfilled. It goes on for 25 minutes and is mesmerizing. It’s also confusing and not very interactive. All of the choices that you had before are not at your disposal. You don’t fight Songbird. In fact, he becomes your ally. Even so, you have to wonder if you are powerless to do anything except play the whole thing again with a sense of fatalism.

I really want to make my own ending to the game. In fact, there’s a joke in there. You can play this game over and over again, but it is a metagame — the Infinite in the title — that you can never win. No matter how many times I play this game, it’s going to come out the same way. The choices are false. And once I understand that, I can truly see how sad the story is.

I wish we could liberate this game from the constraints. We could break it. We could make a movie out of it, like the folks on the Internet who are taking all of the movie-like cutscenes out of the game and stringing them together in a continuous video. We could give Levine an army of developers to make mobile games, BioShock novels, mobile games, TV shows, comics, and paintings. Then people would really see it as a brilliant work of art.

Of course, if we did this, we would turn it into a franchise. What does that mean? Well, this game would become like McDonald’s. We would go down so many paths, trying to make this art into something of our own. And we would crush it, like the Songbird crushes its enemies.