This is a guest post by designer Jim Clark

When I first found out about Kickstarter, I thought it was a great idea. I’ve been making things all my life. As the owner of a visual effects and imaging studio, designing, rendering and visually developing creations is right up my alley. I wanted to use Kickstarter to prove the popular viability of my creations. If the crowd funded my ideas, there was a good chance that the market at large would also be interested.

When I came up with the concept for the UNRULY line of GoPro cases and accessories, the Kickstarter crowd loved the idea. Our two primary products, the Headcase Pro and HeadGear, hit $36,000 in funding — $9,000 more than our original goal — in 30 days.

I thought I understood the process that came after funding was complete. Prior to Kickstarter, I’d taken multiple product lines from concept through manufacturing and delivery. These products were sold in high-design outlets, including Fred Segal and MOMA San Diego. It turned out that those previous victories had little bearing on what happened with Kickstarter. Funding was only half the battle.

With Kickstarter, everything that came after the funding was unexpected and frustrating. Here are my lessons learned.

It’s not a hobby, it’s a company

Creators often overlook the fact that funding a project can quickly become a serious game. You might launch on Kickstarter as a fun way to finance a fun project, but when you start executing that little project, it can easily balloon into a $1 million proposition. At that point, it’s no longer a hobby. It’s a company.

In order to manufacture and distribute your product, you end up beholden to suppliers, manufacturers and everyone else along your supply chain, as well as investors. With Kickstarter, your funders aren’t given any information about how hard it really is to pull off the successful delivery of your product. They’re continually reminding you of what they want and need, and you’re scrambling to assuage their fears.

This became a real problem for us. In general, if you’re successful, Kickstarter funding is only equal to one-third to one-quarter of the sales that you get through wholesale and other retail. While 200 people ordered our products on Kickstarter, we also ended up with a tremendous amount of sales outside of that.

We’d raised $36,000, but in order to pay for everything, we had to raise another $100,000. It could take up to three weeks after your Kickstarter is fully funded to get your money, so it’s not uncommon to find yourself scrambling for additional funds.

Delays are the norm

That lag is one reason that roughly 75 percent of Kickstarter projects are delivered late. Another reason is that Kickstarter doesn’t provide you with any resources beyond your initial funding. If you get into trouble later, you’re on your own.

Many creators face unexpected costs. Our injection mold, for example, relieved us of $25,000. Other creators run into problems because they don’t have the know-how, the expert advice or the resources to produce their products. Without the support of outside entities, creators can run their entire business into the ground before they even deliver their first product.

In our case, the manufacturers delivered all of our products to us three months late. Because of that delay, we missed our primary summer sales. By the time we shipped to our customers, GoPro had changed their entire product design. That obsoleted all of our products, which were designed for the previous model of GoPro, and we’re still paying for it today.

Some policies can stifle creators

Kickstarter’s lack of ongoing, post-funding support is one of several problems that have turned the company into a non-starter for us. Kickstarter has several other policies in place that stifle creators.

They deny projects without explanation.

Kickstarter turns down 25 percent of project applicants, but is notorious for not providing an explanation as to why. The process appears to be subjective and opaque. They won’t allow any projects related to pets, for example, but they’ll let a guy raise $5,000 to hire a skywriting plane to write weird things in clouds.

In today’s Apple design society, the design component of any product is critical to its acceptance, regardless of the technology. It is imperative that we show our idea as a visualization. The key to a succesful design project is the visualization stage. Kickstarter is against this because it doesn’t want backers to confuse photo-realistic renders for a final product. The platform does allow drawings and CAD designs, but virtual renderings are important to a lot of pitches.

Because Kickstarter is an important step in testing an idea and funding it, it’s really important that the creator is able to use all of the tools possible to communicate what the end product is going to be. This includes photo-real renderings to communicate the message or idea of the product. Without the ability to use these visualization tools, the creator is forced into taking an idea further down the road than they may be comfortable with, before they test the waters and acceptance in the market.

For example, our newest product, the Reactor, is very technically challenging and cost-prohibitive to put into production. If we’re not allowed to show potential designs before manufacturing the product, we wouldn’t be able to proceed, because there’s no way to communicate what we’re trying to make.

Kickstarter says “we are not a store.” Yet there are a number of projects that were successful on Kickstarter precisely because consumers were able to buy them in quantities. Kickstart is kicking themselves in the butt by wiping out the ability to buy more than one of something. They’re alienating their user base of entrepreneurs by dictating how those creators should create a message around their product and how many to sell. There’s a sort of idealism in that dictum that doesn’t sync with Kickstarter’s user base.

There are greener pastures for crowdfunding

A crowdfunding site should be designed with the highest regard to the needs of the crowd, not of the founders of the site or the people programming it. Kickstarter is trying to fit its creators into a format that isn’t the best one for building a sustainable business. Their rules aren’t necessarily for the benefit of the people paying the bills.

Starting a business is a commitment. In leaving Kickstarter, I’m looking beyond the dating phase of a funding-only platform. I want a crowdfunding platform that can give me a long-term commitment. There are other fish in the sea, so for the Reactor launch we’re casting our funding nets from a better-built vessel. 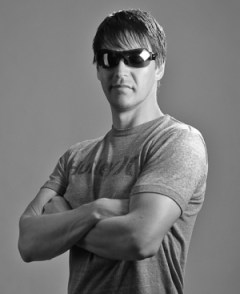 Designer, inventor, animator and entrepreneur — Jim Clark pushes the digital industry envelope, from tech product creation to innovative visual effects techniques. Jim’s industrialist momentum derives from his finite attention to detail, insatiable curiosity, and sincere desire to create and improve design as a whole. With a true appreciation for virtual and tangible products that look aesthetically pleasing and exude sentient excellence, Jim approaches his day-to-day with an eye to achieve perfection and his mind’s eye is already envisioning the next best thing.

Jim has developed and launched a number of high-design and high-tech products, leaning on practicality, design aesthetics and creative branding efforts. Along the way Jim also founded Hive-FX, a successful visual imaging studio, with the credits of Grimm for NBC, NIKE and HP, and the brands MONSTERCINE, UNRULY, NOWWATCH, Pinata and Ruins, which Jim developed.