Learn-to-code startups abound these days, but one in particular is focusing on the very young and is having some success in elementary schools around the country — even underserved schools with no budgets for STEM but a great need for better tools.

The startup is Tynker; it makes a web-based learning platform and a visual programming language for teachers and kids in K-12 classrooms. In a discussion with its co-founder, we found out why teaching kids how to code is so important to him.

Krishna Vedati came to the U.S. in 1991 as a grad student from India. He got a master’s in computer science, then rode the dotcom wave at a handful of startups, including one he founded himself. After IPOs and acquisitions and the eventual bust, he found himself a decade older and wiser but still thinking about solving big-picture problems with technology — this time, a bit closer to home.

“I have two kids, nine and six, a boy and a girl. And they’re exposed to so much technology,” he said in a phone chat yesterday. “But their schools haven’t changed in 50 years. They’re teaching the same stuff in different ways.”

Especially at schools with lower budgets, the tools for learning are antiquated by modern standards. And many more schools, as Vedati’s peers at Code.org would point out, have no budgets for technology or computer science at all.

The solution, Vedati decided, would have to be a free service — something web-based so kids could practice at home and teachers wouldn’t have to deal with unwieldy downloads. And unlike other curricula, it should definitely be based on stuff kids already like.

To clarify, these kids learn the logic of coding. Tynker contains a visual programming language; that is, it uses the building blocks of algorithms without all the tricks of the developer’s trade — curly braces, semicolons, seemingly inconsequential stuff that, when misplaced or missing, can screw up days’ or even months’ worth of work.

“Syntax is not important,” said Vedati. “It’s something you pick up. If you look at algorithms and write in pseudo-language, that’s a logical language. And it forces them to think in terms of solving problems, worrying about how to write it. And over time, they learn to translate into syntax, as well, slowly migrating in PHP or Python or what have you.”

So to start kids out, Tynker focuses on the more important but more basic concepts all programming languages have in common, like how loops work, how to solve computing problems, and how to order and structure tasks for machines. 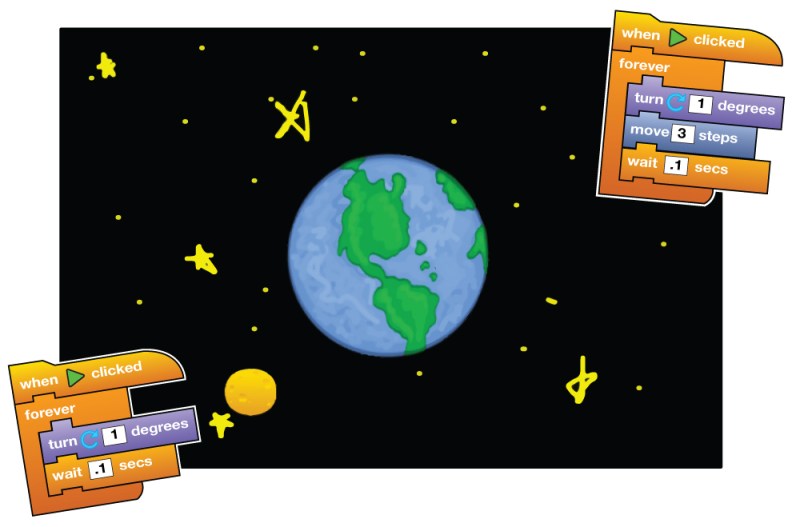 Altogether, he continued, it’s totally in line with the STEM stuff kids are already required to learn.

“Computer science originates from mathematics. If they’re learning math, they should also learn logic, and this is one way to learn logic. … We wanted to really focus on creating algorithmic thinking, to make a playground on which programming in a byproduct.”

So far, Vedati and the rest of the Tynker team have worked with schools in L.A., New York, Texas, and Silicon Valley. He said they found teachers were already looking for computer literacy solutions, and a lot of the schools they spoke to were using different systems.

“We actually went to many schools before we deployed the software and looked at the problems for teachers who wanted to incorporate programming into their classes. … We wanted to simplify the process, so we built the whole thing in the cloud.”

Also, a web-based product means Tynker can continuously improve it and upgrade it, tweaking for how kids use it. Right now, the system figures out what they don’t understand and gives them more puzzles, tasks, and games until they have their personal lightbulb moments, either in school or at home.

Other tools include lesson plans, interactive tutorials, project management software for assigning and grading projects, and advanced lesson-creating tools — all of which are free for teachers and students to use. Tynker is experimenting with “pro” features like analytics — which could be massively useful for school districts trying to figure out how to up their STEM game or prepare high school grads for technical jobs.

And making the tools free, Vedati said, is a big part of Tynker’s vision to bring better STEM education to all children, not just the privileged ones who have access to amazing computer labs and over-educated parents.

“There are haves and have-nots — the have-nots need to have access to this stuff for free,” he said.

“I paid $900 for my son to go to coding camp at Stanford. Giving that value to the kids who just can’t afford it, it allows them to build a lot of interesting stuff.

“Our goal is to educate millions and millions of kids, and at that scale, we can make some money from some schools. But every teacher and student gets lots of content and videos and case studies for free. We can tell you how to run it as an after-school or lunchtime program. We basically want to help them out, to package this knowledge into reuseable units. We’re hoping that teachers across the country start using it. There’s a social conscience to it.”

His vision recalls that of Code.org’s founder and of Treehouse founder Ryan Carson, who is bringing his own learn-to-code platform for a slightly older demographic into high schools around the country. At the high school level, Carson and Treehouse are trying to fix the engineering shortage of the here-and-now, starting with 16- or 17-year-old at-risk young people.

“A lot of these children don’t know these jobs exist. Their parents and their schools don’t know about them, either,” said Carson in a recent interview with VentureBeat.

“So when we tell them, ‘You could get a job at a company like Facebook, you could be earning $100,000 plus, they pay for your insurance, they feed you, and you can work from home and wear casual clothes.’ They’re like, ‘What are you talking about?’”

In that way, a program like Treehouse implemented in the last year or two of high school can act as damage control — both for an industry needing more workers and in the lives of young adults with very few options for the lives on which they’re about to embark.

Vedati, on the other hand, is planning for the long term by working with kids much younger, much earlier, trying to educate them about those options when they still have years to form opinions and create and live their own dreams.

“If you close your eyes and think about the world 10 years from now, it will be completely different,” Vedati said.

“Kids will have computing everywhere. Doctors will be using computing to make decisions. Jobs will require more technology. … The new jobs that will be created won’t be just programming jobs. But can you think about organizing data? Information and computation is coming to every field.”

And that, dear readers, is why your eight-year-old should be coding.