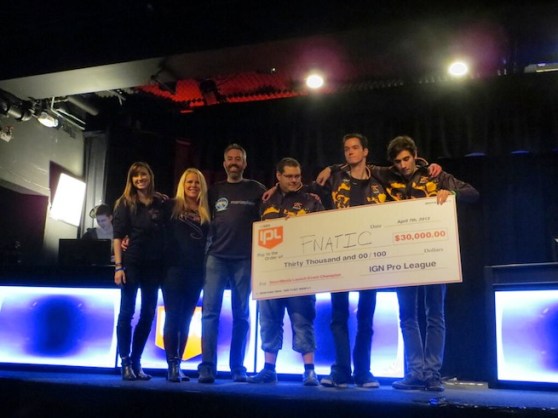 SAN FRANCISCO — Colwn was losing momentum. The European team tied round after round with Curse Gaming, the last surviving Americans in the tournament. But now its loss seemed imminent as Curse’s Casey “Buds” McIlwaine began to eliminate them with surgical precision. First, he took out one Colwn member from an impressive 32.5 meters away, then another at 11.7. The last fell in a tense 1-on-1 battle when Buds shot him from above.

The defending world champions of the first-person shooter ShootMania Storm had fallen. Curse would go on to lose to Fnatic’s dominant performance in the finals, but it didn’t matter. This was by far the most exciting match of the weekend.

“There’s so much pressure,” said Colwn member Alessandro “Stermy” Avallone 24 hours before his defeat. “You have many eyes on you. You have the lights. You’re playing on a big stage. You’re not playing from your room.” 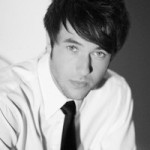 Avallone, only 25 years old, is a veteran of the e-sports (and media) circuit. You could tell: He was very well-spoken and composed and knew exactly what to say. He ditched what may have been a promising career in professional soccer — “I did tryouts for quite famous teams when I was younger,” he told me — when he began entering video game competitions in the early 2000s in his home country of Italy. His list of achievements since playing full-time is nothing short of impressive.

Colwn had recently added a new person to its roster, the 17-year-old Dylan “Akm” Bignet, the younger brother to the third Colwn teammate, Michael “Winz” Bignet. While the team doesn’t have a clear leadership structure, Avallone stressed the importance of showing Akm how to compose himself while up on stage.

“For a young player like him, we try to teach him not only the way to act when you have to play, but we try to make sure that he knows how to have the right mindset when going to live tournaments because there’s [a big] difference than playing online,” said Avallone.

The trio was just one of 16 teams competing in last weekend’s ShootMania launch tournament held in conjunction with the now disbanded IGN Pro League (IPL). On the line was $100,000, but no matter where teams ended up on the ladder, each one walked away with at least some kind of monetary prize.

With so much money and sponsorships involved, it’s easy to forget that some of the pro players, known more by their online IDs than their real names, are still kids — they can’t even drink yet. Many walked around the comedy club-turned-e-sports-arena clutching pillows, backpacks, and duffel bags either waiting for their next match or — for those already eliminated — hanging out to watch the rest of the bracket unfold. At least one of them had his entire family (mom, sister, and sister’s boyfriend) cheering him on from the dimly lit sidelines.

Fans, journalists, IPL staff members, and other onlookers crowded toward the back, where a well-stocked open bar was serving drinks. The main stage, lit up like a Christmas tree with bright monitors and light fixtures, overlooked rows of PCs where anyone could sit down and play ShootMania for fun. They were almost always full.

Placed right near the foot of the stage, where the pros competed, were the commentators (also known as “shoutcasters”). For someone like me who was unfamiliar with the game, they did a good job of setting up the scene and describing the players’ various stratagems and motivations. And a giant projector screen displayed all the professional matches, which was clearly viewable from almost all angles in the venue. 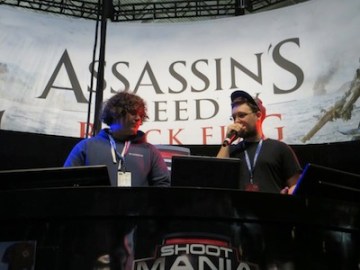 Above: Danny “TestyRabbit” Gillies (left) at the PAX East tournament

This was the kind of experience that Danny “TestyRabbit” Gillies was looking for. Unlike Avallone, this was the first time Gillies — and his underdog team, Ride the Lightning — competed at a professional level. Ride the Lightning qualified as the sixteenth team because of its victory during a special competition held at last month’s Penny Arcade Expo in Boston. Though excited about coming to San Francisco, it ended up woefully unprepared: Ride the Lightning lost both of its matches on the first day.

“A week before PAX, we played about six to eight hours a day,” said Gillies. “But toward the end of the week, our performance kind of like went down a lot because we were just kind of tired of playing. I had a lot of work to do for these last two weeks for school, so I wasn’t able to play that much. So we didn’t play as much as we would’ve liked to.”

No one in Ride the Lightning competes full-time: Gillies is in college, and his two teammates, Jacob “Vee” Calderon and Ryan “Odin” Therrien, both have other jobs. Without sponsorships to help pay their way to tournaments across the country, Gillies seemed unsure of Ride the Lightning’s future as a professional team.

“We got lucky — if Ubisoft wasn’t paying for our trip here, we wouldn’t have come,” he said. “But lucky enough, they did. … I guess [we’ll keep competing] until we run out of money. [Laughs]”