The opening pilot of Defiance, a TV-game transmedia project in the works for five years, debuted last night on the NBC Universal’s SyFy Channel. Early reviews are coming in for both the online game and the show — and they’re not overwhelmingly positive.

Having watched the pilot, I think it was an enjoyable two-hour episode. It has humor, action, political intrigue, and some mystery to keep you enticed to watch more. But Game of Thrones, it’s not. I’ve watched the show and played the game (see our impressions story by Stefanie Fogel), and they are not the highest-quality entertainment experiences I’ve had in the past year. 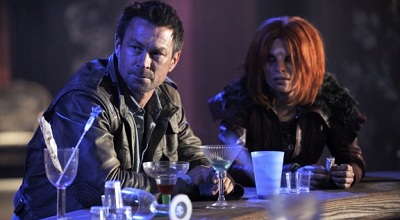 Add to that the huge distraction from the horror in Boston today, which may deter people from creating any buzz around the pilot. The initial talk about the game was negative because of some well-known server issues that stopped people from joining the game at the outset.

That means the risky bet that some big companies have made on Defiance is looking pretty scary right now. Trion Worlds spent the past five years and an estimated $70 million developing a cross-platform online game for the PC, Xbox 360, and PlayStation 3. The game-show combination is perhaps one of the biggest bets in entertainment today.

The show has good cast, starring Grant Bowler as Joshua Nolan, a war veteran who becomes a lawman in the wild-west town of Defiance in a future where a post-apocalyptic Earth has become the home to seven alien races. Bowler and his adopted daughter Irisa (played by Stephanie Leonidas) make an appearance in the game and then escape the San Francisco Bay Area and drive onto the TV show’s setting in what was once St. Louis, Mo.

The initial reviews are thin and not pretty. So far, 15 game publications have given the game an average rating of 62 out 100, according to Metacritic, a review aggregator. That’s pretty pathetic. On TV, 13 critics have given the show a rating of 52 out of 100. That’s even worse. The Boston Herald said it felt like the “Frankenstein of TV shows,” built from the parts of other successful shows — from Battlestar Galactica to Deadwood.

That doesn’t bode well for Trion, which has to hold the attention of gamers for many more hours of content compared to the TV show, whose first season will span 12 episodes.

I’ve put a dozen hours into playing the game, and I have to agree with the critics so far about its shortcomings. But I will acknowledge that I have played a tiny bit of the available content, and I am not willing to give the game a review score just yet.

As Nolan and Irisa move into the town, they meet the mayor, Amanda Rosewater (Julie Benz), and residents like Rafe McCawley (Graham Greene), lounge owner Kenya (Mia Kirshner), and the ambitious and evil-looking aliens, the Tarrs (Tony Curran and Jaime Murray). Then events unfold that threaten the fragile peace in the town where aliens and humans live together.

In the TV show, Nolan and Irisa are scavengers. In the game, players take on the role of Ark Hunters, who hunt down lost alien artifacts. The idea is to make the players feel like the main characters. In the show, Bowler does a great job being a cocky yet diplomatic lawman in a lawless town.

Trion is promising a couple of patches to fix software problems. And it has to give out some extra goods to players to convince them to stick with the game. 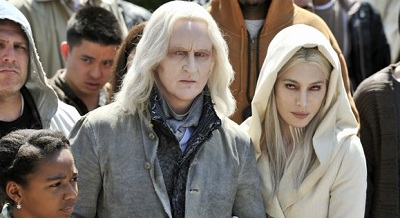 As I noted in my previous preview, the content is good. But I don’t know if this show and the game are going to pan out. You don’t have to watch the show and play the game at the same time, but it’s a fair bet that these two will live or die together.

The Wall Street Journal reported that the development costs alone on the video game are $70 million. That’s not hard to believe considering Trion has raised more than $150 million and has a team of 150 working on the game. Over five years, it’s easy to see how payroll costs alone could hit that number. Another 150 worked on the TV show at SyFy, and they all had to coordinate.

The story is set on Earth in the year 2046. It takes place after a massive alien ship, the Ark, crash-lands on Earth. The aliens are seeking a refuge as they flee their own planet, but they make a mess of Earth. The ship terraforms the whole place, and it dumps seven unwanted alien races to live or fight among the surviving humans. The aliens brought with them a new resource, Gulanite, that everyone wants to control in a kind of gold rush. The game’s version of San Francisco is in a state of constant warfare. In Defiance, the races are living together in an uneasy truce. 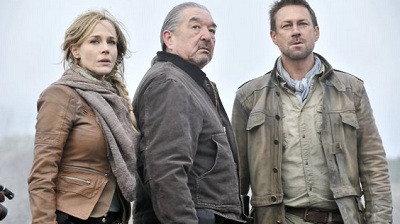 In today’s pilot, players got to see more of the backstory to the game that they’re playing. Nolan and Irisa roll into town, meet the mayor, and quickly get into trouble. The mayor talks Nolan into becoming the sheriff of the town, and he immediately has to deal with a Romeo and Juliet subplot that leads to a cross-species murder. Nolan and Irisa just want to escape to Antarctica, but they have to choose their temporary allies wisely.

Add to that some serious scheming among the power brokers of the town and those who don’t mind betraying everyone who lives there. The townsfolk learn that they’ve got an invasion of mechanical robots to fend off. They have to either pull together as one to defend the town or fall as a divided community.

The story of the town is an immigrant drama. The pilot has some slow parts, but it drew me in. The acting was good, and the story had tension, action, and comic relief. The climax combat scene was pretty satisfying, but I had to shake my head at how dumb the invaders were. They don’t seem to have heard of these things called “scouts,” and they walked right into an ambush.

The show also set in motion a number of mysteries that will unfold in future episodes. I liked the episode, but I can’t say it’s going to hold my attention for a whole season in competition with so much other entertainment. It has a large cast and is tightly woven for a two-hour episode.

What was your opinion of the TV show? Take our poll below.