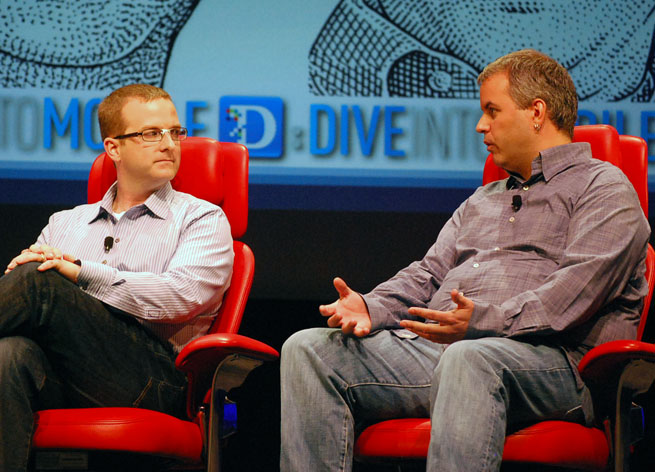 NEW YORK CITY — Facebook CTO Mike Schroepfer (left) and director of mobile engineering Cory Ondrejka showed up today at the Dive into Mobile conference. Naturally, a lot of curious observers had questions about the just-launched Facebook Home skin of Android.

Facebook Home launched on select Android phones in the U.S. on Friday, including the Samsung Galaxy S III and the HTC One X. Google chairman Eric Schmidt seemed surprisingly positive about Android iterations like Facebook Home today, saying, “I love it.”

One of the first major questions about Facebook Home is when Home will land outside the U.S. Ondrejka said the download of Facebook Home in the Google Play store would start rolling out internationally today.

Ondrejka also said the first major update to Facebook Home will be released in the second week of May.

The Next Web’s Harrison Weber also questioned the Facebook duo about the wave of extremely negative reviews Facebook Home has received by users in the Google Play store. Ondrejka didn’t appear phased by the negativity.

“There are some 5-star reviews where people are enthusiastic,” Ondrejka said. “We look at lower reviews and see an opportunity to make it better.”