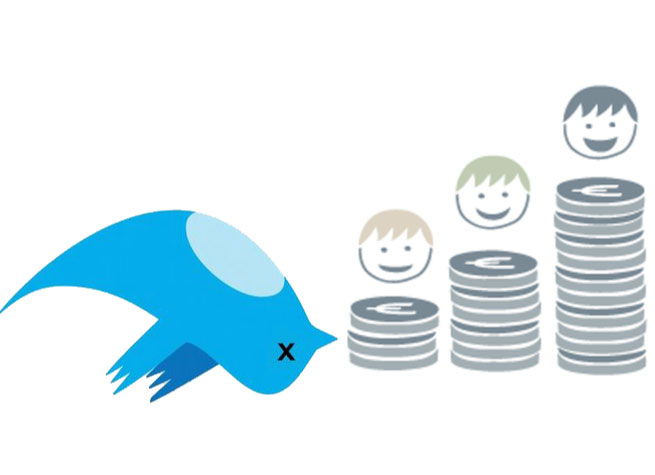 Crowdfunding payment service Flattr is no longer welcome when it comes to Twitter, the startup announced this morning.

Flattr enables people to donate money to the content that’s freely available online. You set a monthly allowance on Flattr for how much you want to spend per month (say, $20), and it can split it up among the various creators you donate to. Last month the service switched from requiring content creators or services to embed a Flattr button on their sites to a model in which you reward those same creators just by using many of the social networks you’re already plugged into. Perhaps the best example was of the new model was the process of making a Flattr payment when clicking the “favorite” star/button on Twitter.

But as of today, you can no longer do this.

Twitter correctly pointed out that Flattr’s use of favorite button data was in violation of the Twitter API terms of service. Specifically, the clause in violation states that third-party companies cannot receive compensation for tweet actions, which prevents spammy promotional services from selling retweets to people and limits the amount of fake Twitter user activity. But Flattr isn’t trying to sell retweets or inflate activity, yet it does take a cut from the overall transaction. This means Twitter had a big problem with it.

“The idea of not letting people use their favorites in the way they want is in no way is mentioned in the API terms. We feel that Twitter is reading things into their terms that is not there,” said Flattr co-founder Linus Olsson in a blog post.

With Flattr you can not of course pay people to retweet, follow or favorite you. Flattr is the opposite, a way to voluntary reward someone for something that they have created. It’s not possible to use Flattr to pay creators to get a certain result.

Well, the reality is that this was not how Twitter read it. After mailing with Twitter’s “Platform Operations” about this Twitter replied to us that, “If your service compensates content creators … in a manner that is not attached to Tweet Actions, this would be in compliance with our API Terms of Service.” To favorite somebody is considered a Tweet Action.

We have tried to suggest different solutions asking for an exception to the terms, even forgoing our cut, etc, without any result. But, this does not mean that we will give up negotiating with them over this on behalf our users and also their users.

Flattr contacted Twitter to see if it would make an exception to the clause, and it offered to forgo its 10 percent cut of all transactions initiated by a user, but the company won’t budge. Olsson previously told me that his company hadn’t reached out to Twitter prior to launching the new Flattr functionality, but my guess is had he tried they would have told him the same thing.

Twitter’s decision to block Flattr from using the API for its payment platform mimics an earlier decision by the company to shut down in-stream payment service Ribbon a mere 90 minutes after launching. And while Twitter doesn’t appear like it’ll make a return anytime soon, the Flattr team did say its working on a way that people can compensate artists through its payment platform on Twitter that doesn’t violate the TOS.

The one bright spot in this situation is that Flattr did manage to add support for YouTube videos. And, of course, the service is still integrated within Instagram, Soundcloud, Github, Flickr, Vimeo, 500px, and App.net — with Facebook is still noticeably absent from that list.