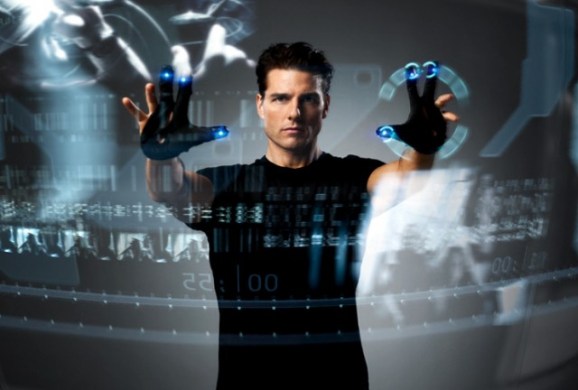 Leap Motion, the motion-control software and hardware platform that provides a Kinect-like experience for controlling your computer with hand motions, announced a major new partnership with HP today to embed its hardware and software right into new HP laptops and desktops.

And mobile devices like smartphones, tablets — and glasses — are coming up next, the company told me.

Currently, Leap Motion requires a tiny peripheral attached to your computer to enable 3-D motion control, but this deal means that HP customers will be able to control their PCs with waves, motions, and gestures in the air without any need for attached peripherals or extra software. Everything will just be built right in.

And that, according to Leap Motion chief operating officer Andy Miller, is just the beginning.

“Any place where you can fit tiny pinhead cameras, you can fit Leap,” Miller told me yesterday. “And this deal, we feel, is just huge for Leap, for our technology, for validation, and for our ability to miniaturize our hardware into tiny devices.”

Above: The Leap controller – external version

The deal has been a year in the making, Miller said, as HP has long nurtured a relationship with Leap Motion and has been evaluating the startup’s technology for almost that long. Leap Motion and HP are not yet announcing the scope of the deal or which exact PCs HP will be embedding the technology into, but it will be a “very significant” number, probably in the millions.

HP is the leading PC retailer on the planet, selling 35 million PCs in the first quarter of 2013. The terms of the deal with Leap Motion allow HP to both embed the entire solution right into its products and offer an external Leap Motion controller bundled with a PC.

And although PC sales just had a disastrous quarter and HP sales were down 23 percent, this announcement could be just the stimulus HP needs to boost sales — and boost excitement for its products.

PCs, however, are just the beginning. The sky is the limit for Leap Motion, Miller said, as the company is looking to commercialize its incredibly detailed motion capture and control technology in industries as diverse as robotic surgery and automotive manufacturing. And in every mobile device you carry.

“We’re looking to embed our tech into watches, and smartphones, and glasses, and everything,” Miller said yesterday.

Which means the Android phone, and perhaps the iPhone you carry, could have motion recognition technology soon, as could your tablet. And the glasses part sounds very much like a Google Glass application, which would be an extremely interesting possibility. Leap Motion’s tiny sensor is amazingly precise, tracking both hands and all 10 fingers at 290 frames per second and detecting movements as small as 1/100 of a millimeter. All of which could make for some very interesting mobile applications.

That, however, is for the future.

Today, the news is HP and bundling into PCs. This is Leap Motion’s second major OEM bundling deal — the company announced a bundling agreement with Taiwan-based Asus in January. That deal, however, was just bundling; there was no embedding of the actual technology into laptops or desktops.