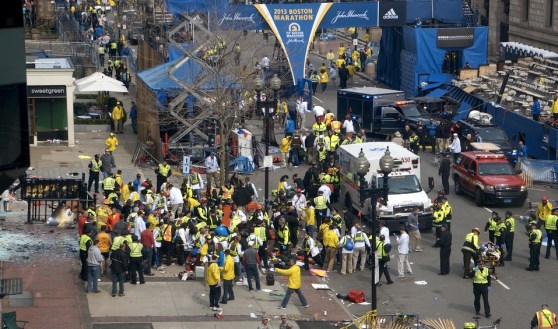 When a tragedy hits, we all struggle to figure out what to do. It’s hard to sit at your desk, thousands of miles away from the news, watching scenes of horror and suffering scroll across your screen, and know that there is nothing meaningful that you can do to help the people in the pictures.

We are glued to our screens, watching the liveblogs and scanning our Twitter feeds for the latest scraps of information. It feels like doing something, but it’s not: We’re just passively collecting information while we struggle to figure out what to do.

For those of us in tech, a disaster like Monday’s bombing of the Boston Marathon is also a reminder that there are far more important things in life than social media startups, cute robots, Facebook chatheads, or Google Glass. Things like running marathons. Giving blood. Hugging our children. Letting our friends and family know that we’re OK.

And yet, tech can play a small but meaningful role. Google put up its own person finder for Boston on Monday to help connect people in Boston with those who might be worried about them. But Facebook may have been the most effective people finder of all as Bostonians checked in to say they were safe.

Twitter, for its part, played a role in funneling news from Boston to the rest of the world, and — as is increasingly the case with big, breaking news events — it was the medium through which the first reports and photos (and, yes, Vine videos) began to trickle out. The Boston Police even used Twitter to solicit videos, photos, and tips that could lead to solving the crime, and indeed, online crowdsourcing may play a key role in the investigation, as Wired’s Spencer Ackerman reports.

Surprisingly, I didn’t see a lot of people jumping to conclusions about exactly what had happened or who was responsible. Perhaps that’s a reflection of the people I follow, many of whom are either journalists or are extremely media-savvy. Regardless, the Twitter news stream seemed remarkably focused on facts, not conjecture. I’d like to take that as a sign that Twitter is maturing as a source of factual news.

Still. All that pales in comparison to the calm and orderly help that people on the scene in downtown Boston were providing. Yellow-jacketed marathon volunteers, police officers, and soldiers all worked side-by-side to pull away twisted metal barricades, provide first aid to people, carry victims to safety, and keep the crowds calm and at bay. That’s real help.

So I asked VentureBeat’s readers this morning, “What should the tech community do to respond?”

The responses ran the gamut. “Shut up for once” was the top-rated response, and as a tech journalist, that gives me pause. Even writing this column makes me worry a bit: Am I just taking advantage of a tragedy to put my own spin on things? Is there really a tech story to be written about here? For that reason, we at VentureBeat have proceeded very cautiously in covering the explosions, preferring to write only when we have something to add.

Other responses are more focused. My favorite, from Ron Schott: “Work with Facebook/Twitter/others on a national Emergency Response System for social media that puts important information into people’s feeds during times of emergency.” That’s not inconceivable. Apple’s iOS already has the capability to put AMBER Alerts and other local emergency alerts directly into your phone’s notification center, and those are both turned on by default. Why couldn’t social networks incorporate the same kind of geographically targeted emergency messaging?

One reader suggested that “big data” analysis could help identify threats before they turn into real acts of terror. Another suggested (facetiously I hope) that the answer was more sensors, more cameras, and more drones in the sky.

Joe Chernov, a marketing guy with a Boston-area startup called Kinvey, pointed me to an excellent interview between Washington Post blogger Ezra Klein and security pundit Bruce Schneier. In it, Schneier offers this telling rule of thumb:

I tell people if it’s in the news, don’t worry about it. By definition, news is something that almost never happens. The brain fools you into thinking the news is what’s important. Our brains overreact to this stuff. Terrorism just pegs the fear button.

Klein, by the way, wrote a moving statement on why marathons matter last night. “If you are losing faith in human nature, go out and watch a marathon,” he quotes Kathrine Switzer, the first woman to run the Boston Marathon, as saying.

Finally, here are a few more specific ways you can help.

A Boston-area tech group called TUGG (Technology Underwriting Greater Good) has a fundraising campaign that is raising money to support victims of the bombing. It has raised $38,000 so far. I’m sure they could use more.

The Red Cross always needs donations of blood and of money.

And techies, consider contributing your time and expertise to nonprofits outside the tech world.

“It is much more fulfilling to know, despite terrible news, you yourself are making a difference, than to simply let the depression of a seemingly endless amounts of hate witnessed from media sources slowly erode your faith in humanity. There is no greater payoff in life.”