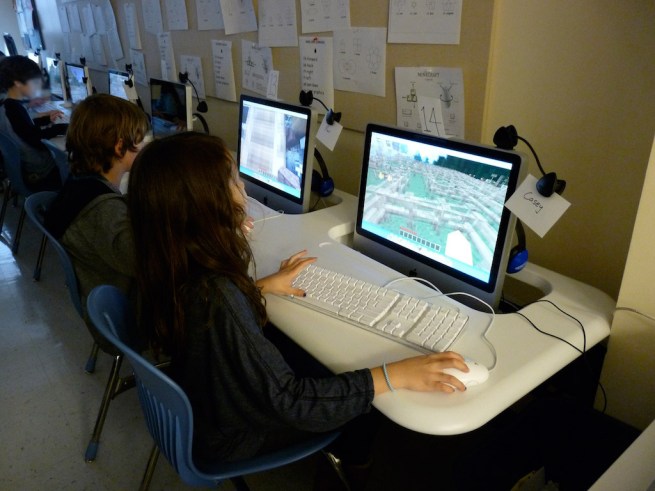 Summer camp used to mean swimming, hiking, and bonfires. These days it could mean mines, exploding creepers, and JavaScript.

Educational group iD Tech Camps is using the block-building sandbox Minecraft and other games to teach children about science, technology, education, and math (STEM). The organization holds its camps over the summer at nearly 60 universities around the country.

“This is our 15th season,” iD Tech vice president of marketing and business development Karen Thurm Safran told GamesBeat. “We’ve been offering video game courses from the start. We look for products that are interesting — that’ll appeal to kids — because we want to show them how they can take a hobby like video gaming and turn it into a lucrative STEM career.”

STEM summer camps from other organizations

The company uses developer Mojang’s Minecraft to introduce many basic and advanced concepts to the students in four courses. The subjects cover ideas like basic game design for ages 9 to 12 as well as programming for ages 13 to 18.

Courses come in two flavors, one-week camps and two-week “academies,” but just because the camps are only a few days long doesn’t mean they won’t cover heavy subjects. One of the week-long courses, Minecraft – Game Modding & Java Coding, requires that its teen attendees already have a “solid understanding of programming languages such as Java, C++, or PHP.”

“Most kids play Minecraft, and so they’re very excited to go in and modify it,” said Safran. “So Minecraft has actually expanded the market. It takes kids who would never think about programming — and since we offer four different Minecraft courses — we can get them at different angles depending on if they have programming experience or depending on their age.”

A bait and switch

Video games are just the bait, according to one of the program’s graduates.

“The iD Tech camps opened my eyes to possible careers in games,” former game developer Mark Grim told GamesBeat. “It was 2002 when I did the camp. I went for a multimedia game-creation week-long class. I was always interested in video games so I was curious what it was to make a video game, but I didn’t have any idea what it was like.”

Grimm knows he benefited from seeing behind the curtain at such a young age.

“It was really meaningful for me to see that [game development] wasn’t this big, nebulous industry,” said Grim. “It’s actually very approachable, technical, and interesting. From that point forward, I always had my eye on a career in video games or software development.”

Grimm was in between his junior and senior year of high school when he attended the class. He says that iD Tech helped him decide what to study when he eventually went to Massachusetts Institute of Technology in 2003. At MIT, he learned more about game development and eventually got a job working at Rock Band developer Harmonix Music Systems. He has since left that studio to pursue a business degree at Boston University.

When it comes to Minecraft, it’s all about how much it appeals to kids that might not even know they can make games.

“If there’s a kid out there playing Minecraft, he might check out the camps because there’s a Minecraft class,” he said. “I don’t think that kid would have come before id Tech integrated Minecraft into the curriculum.”

Minecraft creator Markus “Notch” Persson is only 33 years old. He grew up playing games that inspired him.

I asked the developers at Mojang how it feels to know that young kids are finding the same inspiration in Minecraft that they found in the games of their childhood.

“It’s a humbling experience to be part of a game that is helping define a new generation of programmers and developers,” Mojang spokesperson Lydia Winters told GamesBeat. “At Minecon, [our annual convention], it’s incredible to see youth looking up to Minecraft programmers and wanting to learn coding themselves.”

Winters thinks that Minecraft makes such a useful tool for education simply because it is so open but simple.

“Teachers are able to use it to teach complex concepts through something students already enjoy,” she said. “As a former teacher, I wish I could have used Minecraft in my own classroom to engage my students in learning about a variety of subjects.”

More parents are looking for ways to teach their kids to understand technology. It’s a difficult thing to do because so few grownups understand coding. That’s why parents are delighted to send their kids to “play” with games for a week because the kids might come back with a passion for software development.

“Statistics show that in the next decade there will be over 800,000 unfilled STEM jobs,” said Safran. “Today’s kids are not training in college for those fields, so this is a real lucrative industry to get into. Plus, kids will be doing something that they love.”

I loved going to woodsy summer camps with canoeing and whittling when I was young, but I probably would have loved a gaming camp even more. Coming out of it with a taste for technology and programming would have been a major bonus.