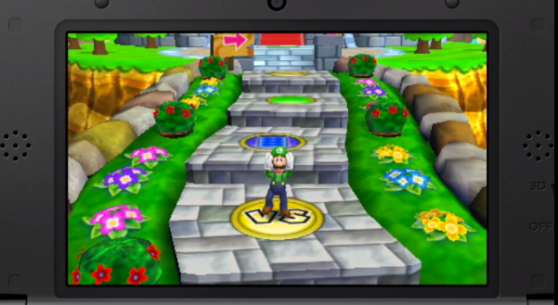 Mario Party is a series of multiplayer minigames. Players move around an interactive game board, taking on either the A.I. or other gamers. According to Iwata, Mario Party for the 3DS has a “Total of seven game boards, each with their own set of rules.” According to Iwata, “The gameplay changes dramatically on each individual board, and there are some maps where victory is decided quickly, making a game that is easy to enjoy even if you don’t have a lot of time.”

The new Mario Party is coming this winter.

For instance, one game board has players collect boosts and use them at the proper moment to catch up to other players when they are behind in the game. One board features giant Bullet Bills that shoot at the player, and you must decide whether it’s safe to move, or to wait before proceeding. Moving at the wrong time can put you behind the other players.

Mario Party for 3DS is the 11th installment in the series.