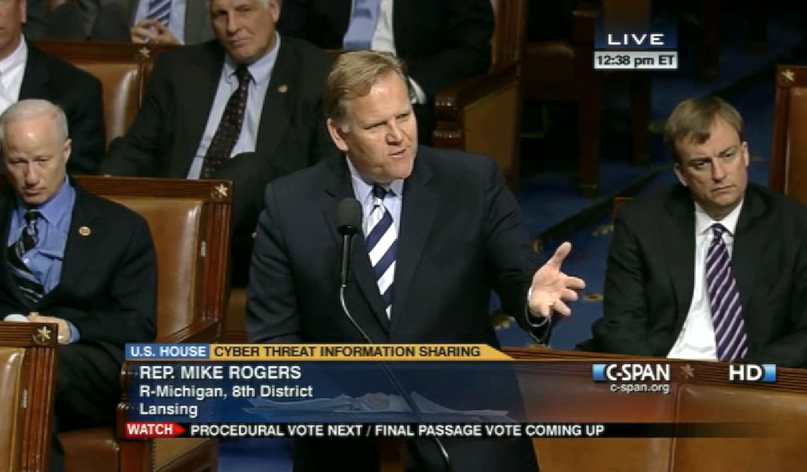 The U.S. House of Representative passed the Cyber Intelligence Sharing and Protection Act (CISPA) today after spending two days amending and debating it.

CISPA intends to open up the lines of communication between the private and government sectors to share information about breaches on private companies’ computer systems and other security problems. Many privacy and advocacy groups, however, have opposed the bill saying it doesn’t protect personal information.

The bill will now head to the Senate for its approval. If approved, it will go on to the White House, where President Barack Obama has already expressed grave concerns over the bill. Prior to the two days of amendment approvals CISPA faced, the White House threatened to veto the bill if it arrived on Obama’s desk in its current state. It is unclear whether the White House stands by this comment now that a few amendments have passed.

“Now that CISPA has passed  the House, the real battle will be in the Senate. I think we’ve got a stronger position in the Senate to defend online privacy, but there’s a lot of political will to move cybersecurity legislation this year,” said Electronic Frontier Foundation Activism Director Rainey Reitman in an email to VentureBeat. “We also have enough time now for concerned citizens to actually reach out to staffers and set up meetings with Senate offices, either in DC or when they next visit their home districts.  Every letter, phone call, and meeting makes a difference.”

But some legislators are still unconvinced. Minority Leader Rep. Nancy Pelosi (D-Calif.) expressed her worry on the House floor today saying the bill still didn’t meet the standards that uphold American’s civil liberties and gives companies too much immunity when providing attack information.

“They can just ship the whole kit and caboodle, and we are saying minimize what is relevant to our national security,” said Pelosi before the vote today. “The rest is none of the government’s business.”

Pelosi went on to say that the bill doesn’t touch on what she called the nation’s biggest cybersecurity issue: our infrastructure. The Rules Committee, which determines what jurisdictions you can and cannot touch in your bill, could have come together with the Homeland Security committee to allow CISPA’s writers to include infrastructure needs, according to Pelosi. But that didn’t happen.

“It’s just that curtail balance between security and liberty that I do not think has been struck in that bill. So for my own part, it will not have my support,” she concluded.

A second representative, Ed Perlmutter (D-Colo.) introduced a last-minute, slightly off-topic amendment that dictates government can never create an Internet firewall similar to China’s that disrupts the public’s access to the Internet. The amendment also made asking prospective employees for social media passwords during the interview process illegal. The amendment was not passed.