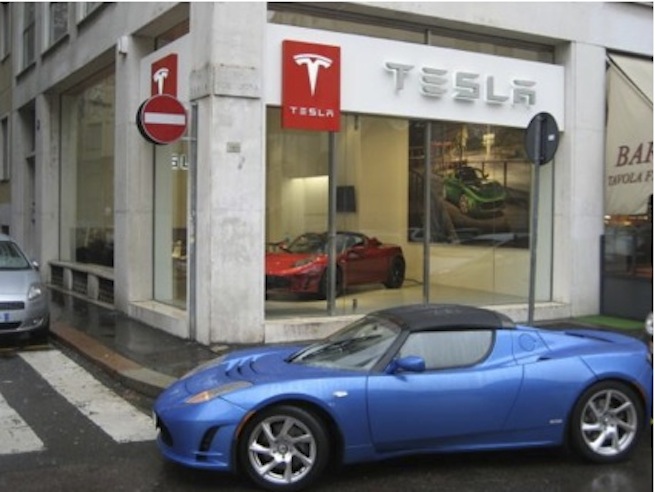 Several thousand Tesla owners have now purchased their cars by ordering and paying for them online after visiting a Tesla Store showroom.

No franchised dealers are involved.

That’s a model that Tesla Motors feels is crucial to getting its electric cars into the mainstream.

Now Tesla’s ambitious CEO Elon Musk suggests that perhaps the company will attempt to ensure its legal right to sell cars directly at a Federal level.

In an interview last week with trade journal Automotive News, he suggested that two routes might be Congressional legislation or a Federal lawsuit alleging restraint of interstate trade.

He suggested that the company would rather fight “one federal battle” than “20 different state battles.”

Musk has been in the forefront of the fight to protect Tesla’s store-and-online-ordering model.

Most recently, he testified last week in Texas on a bill that would explicitly permit customers to buy direct from carmakers who sell “only all electric-powered or all battery-powered motor vehicles.”

In other words, from Tesla Motors.

Ever since Tesla announced its plans to sell cars directly, with factory-owned Tesla Stores and Tesla Galleries acting only as display showroms, car dealers and their associations have denounced the plan.

Most states have some variation of a law that says automakers cannot open wholly-owned dealers that compete with franchises selling the same brand.

Dealers feared in the post-war period that automakers would set up their own dealerships and give them preferential financial terms over franchised dealers.

But Tesla Motors has no franchised dealers to protect.

Nonetheless, the Colorado Auto Dealers Association got that state’s law changed in early 2010 to forbid direct sales of any car by any maker soon after Tesla opened its first store there.

State auto-dealer groups are viewing the Colorado legislation as a model, and such efforts may pop up in other states as well.

Meanwhile, William Underriner, last year’s chairman of the National Automobile Dealers Association, told a group of Detroit journalists in December that the association has “a whole mess of lawyers in Washington” who work on state franchise laws.

NADA could conceivably deploy those attorneys to support state dealer group efforts in every location Tesla seeks to open a store or service facility.

Auto dealers say that Tesla should use existing dealers who are already operating and know their local markets.

Musk counters that those dealers make the bulk of their profits from selling gasoline cars, meaning that they have little or no incentive to support a disruptive product like the all-electric Tesla Model S luxury sport sedan.

The idea of helping Tesla Motors to make its non-dealer stores legal seems to have at least some support among the general public, too.

A petition on WhiteHouse.gov urges the Obama Administration to “overturn franchise laws that limit auto manufacturers from selling their vehicles directly to consumers.”

Posted on Tuesday, the petition must reach 100,000 signatures by May 16 to be considered by the White House.

Thus far, it has fewer than 2,000–though we suspect that number may rise as Tesla fans and supporters get wind of it.

This story originally appeared on GreenCarReports, one of VentureBeat’s editorial partners.