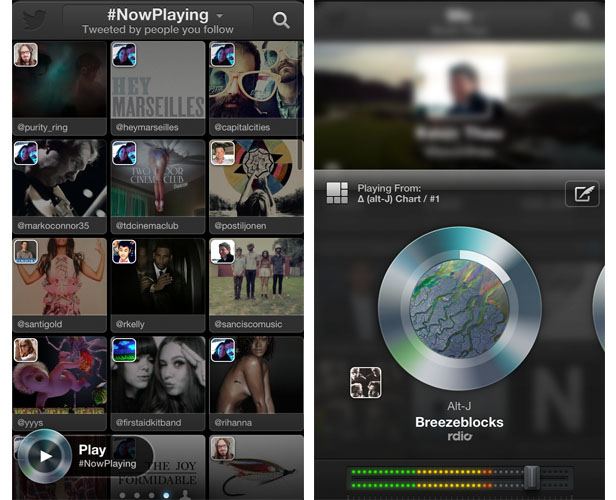 After a month of speculation, Twitter has finally launched a full-fledged application for the iPhone and web dedicated to music discovery, the company announced today.

Twitter bought the music app We Are Hunted last year with the intention to use that startup’s tech, which focuses on music discovery and finding new music to listen to. Now that tech is on display in the new Twitter #Music app.

“Today, we’re releasing Twitter #music, a new service that will change the way people find music, based on Twitter,” We Are Hunted founder Stephen Philips wrote in a blog post. “It uses Twitter activity, including tweets and engagement, to detect and surface the most popular tracks and emerging artists.”

The Twitter Music app lets you see songs that have been tweeted by artists and people you follow on Twitter. You can also use the app to listen to music other people follow. Twitter uses rapper Wiz Khalifa as an example — you can search for his name and then see the artists he is following. When you find a song you really love on Twitter Music and want to share, you can compose tweets from inside the app.

Songs playing on Twitter Music come from three sources: iTunes, Spotify, and Rdio. The songs playing will by default pop up as a preview in iTunes, but if you login with either Spotify or Rdio, you can listen to the song in full on those services.

The service is available first in the U.S., U.K., Canada, Ireland, Australia, and New Zealand. Access to the app will be rolling out to all Twitter users over the next few hours.

Twitter says it also wants to bring the app to more countries and eventually launch an Android counterpart to the iPhone app.

Check out a few more photos of Twitter Music below: