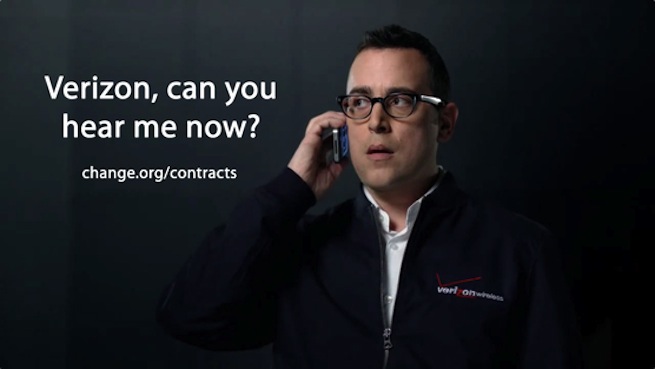 An online petition urging Verizon to ditch its wireless contracts is gaining momentum.

Verizon customer Mike Beauchamp made the case for “an affordable way for consumers to purchase their devices” on online petitions site, Change.org. Since launching on April 5, his petition has already received 90,000 signatures and over 800 comments.

Beauchamp, a Verizon customer from Wichita, Kansas, said he was inspired to start the petition after reading an article citing Verizon’s CEO Lowell McAdam saying it would be “pretty easy” to eliminate contracts. McAdam reportedly hinted at a recent conference that customers should start asking for it and the message would be received.

“We needed a way to collectively be heard, which is far more powerful than individually asking Verizon’s customer service reps,” said Beauchamp in an interview.

To subsidize the high cost of smartphones, wireless carriers are requiring customers to switch to long-term contracts, essentially locking them in for a period of two to three years. Customers that choose to transfer to a different network face hefty fines — up to $350, according to Verizon’s termination policy.

Contracts have received widespread resistance from customers, so T-Mobile recently announced that it would shake up its payment model to eliminate contracts.

Verizon has not responded to Beauchamp’s tweets and phone calls. When asked for comment, a Verizon spokesperson would not offer any further information beyond this prepared statement: “Verizon Wireless has for years offered many different choices for customers, including contract plans or month-to-month plans that do not require a contract.”

Still, Beauchamp remains confident that Verizon can’t ignore a direct request from thousands of its customers. “I don’t know how many signatures we’ll need — maybe it will be 500,000 or we’re nearly there — but I know we’ve already caught their attention.”

If the network ultimately yields to popular pressure, this wouldn’t be the first time.

In late 2011, a petition started by a young nanny, Molly Katchpole, pressed Verizon to stop charging people a convenience fee to pay their bills online. 166,000 people signed her Change.org petition, and in under 24 hours, Verizon caved. Cynthia Butterworth needed to cancel their shared cell phone contract so her sister’s abusive husband couldn’t track her phone calls. Verizon said it would cost $500 to end her contract, but after she received 194,000 signatures on an online signature, the company changed its policy.

“On two separate occasions, they’ve have successfully pushed Verizon to overhaul its policies in response to consumer outrage,” said Charlotte Hill, a spokesperson for Change.org, who said it’s “in the realm of possibility” that Beauchamp’s campaign will succeed.

Despite his grievance with contracts, Beauchamp won’t consider an alternative carrier. He believes that Verizon has other networks like AT&T and T-Mobile beat on reliability and service. As a result, many of its policies, such as the convenience fee or a recent decision to extend the wait time for an upgrade to 24 months (up from 20 months), have not been customer friendly.

Beauchamp believes that Verizon customer’s won’t stray, even if they’re offered more freedom and flexibility to switch networks — so long as Verizon continues to offer the most reliable coverage.

He cites one of the most popular comments on the Change.org petition from a customer in Tampa, Florida: “As a Verizon customer, I also don’t believe in contracts. If a company’s service is superior to others, people will remain loyal.”