Fitbug claims Fitbit has caused irreparable harm and damage to their company, and it has asked the U.S. District Court in Northern California to order Fitbit to stop allegedly using its Fitbit mark and conduct that causes confusion with Fitbug’s brand.

“There is no doubt with every month confusion is getting worse,” said Paul Landau, the CEO of Fitbug. “There are so many similarities between the two brands. We issued a cease and desist order over a year ago, and they didn’t oblige.”

Founded in 2005, Fitbug combines activity-tracking devices with web and mobile technology that gives personalized weekly activity and nutrition targets as well as advice, feedback, and encouragement. The U.K.-based company started using its trademark “Fitbug” in the U.S. the same year.

Fitbug was one of the first companies in the fitness-technology market, combining electronic tracking devices with digital coaching to help people become healthy and lose weight.

The lawsuit alleges Fitbit created and distributed identical devices and services four years after Fitbug began its operations in the U.S. These actions, and the nearly identical names and marks, have caused confusion among consumers and are damaging Fitbug’s business, according to the suit.

Fitbug said that over the past year, the company has received numerous customer service requests from users needing assistance with their Fitbit devices, and media publications, social media, and potential business partners have confused their products as well.

According to the complaint, Fitbit has mirrored Fitbug’s logo, icons, photographs and imagery on the website, products, and packaging materials, going as far as including a blue dot over the letter “i.” Fitbug recently changed its logo and no longer uses the blue dot.

Fitbit uses similar bright colors, photography, silhouettes, packaging, and imagery on its product that Fitbug began using in 2006. Diagrams monitoring users’ food intake and energy levels are almost identical as well. Some images presented in the suit are shown below.

The lawsuit was filed on March 29. Fitbit has yet to respond to the allegations. 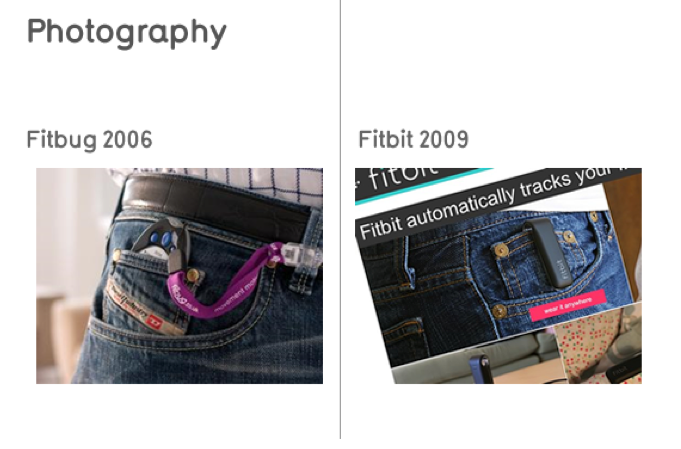