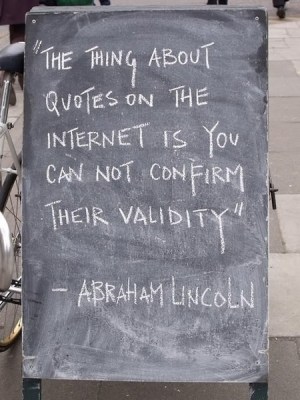 It’s easy to become caught up in tweets or Facebook posts alleging a story is true when there is very little to back it up. Recent events like the Boston Marathon bombing and fertilizer plant explosion in Texas incite a swarm of incorrect information including photos, videos, and stories. It’s important as a consumer of news to be able to determine what’s fake and what actually happened.

Serge Malenkovich, writer for the Kaspersky Daily, gave readers a “Crash Course in Fact Checking,” simple ways to determine if what you see online is true. Make sure you don’t repost something false (and fall prey to the Internet trolls) by following these tips.

Whether or not a story was posted on a reliable news source is a quick way to tell if it’s true or not. Although news outlets like CNN and FoxNews sometimes report inaccurate stories, they are quick to follow up with a correction when they realize their error.

Other outlets like Bloomberg, BBC, CBS, and NBC are good go-to sites for news of the day without spin.

“Just Google it,” is another tip Malenkovich points out quickly clears up any misunderstandings. You can search topics or stories using Google News, and the search engine pulls from only journalistic sources, like those we mentioned above.

Finding a source is another way to determine factuality. Malenkovich notes it’s one of the fact-checking musts that journalists do and it should apply to readers as well. Head back to the search engine and type in your query with “official site,” and you’ll be able to find (or not) a legitimate source.

Fake quotes and images permeate the Internet. Sometimes it’s quite obvious when it’s incorrect, however it’s easy to get duped – like we saw when Photoshopped images masqueraded as photographs of Superstorm Sandy and several news reports picked them up. An image search is one way of finding out if an image is legitimate, however Malenkovich points out the (awesome and helpful) site Pskiller that determines whether photos were doctored.

When in doubt, you can always go to Snopes, one of the most comprehensive analyzers of hoaxes on the Internet. From the sniper cheerleader circulating Facebook in recent weeks to the false claim that Coke acids are bad for you, Snopes is the first to point out flaws in popular news and information being passed around the web.

It’s vital to determine what stories are true in media. Next time you’re enthralled in a hard-to-believe story on the Internet, take a minute to check out its legitimacy. You might be surprised.