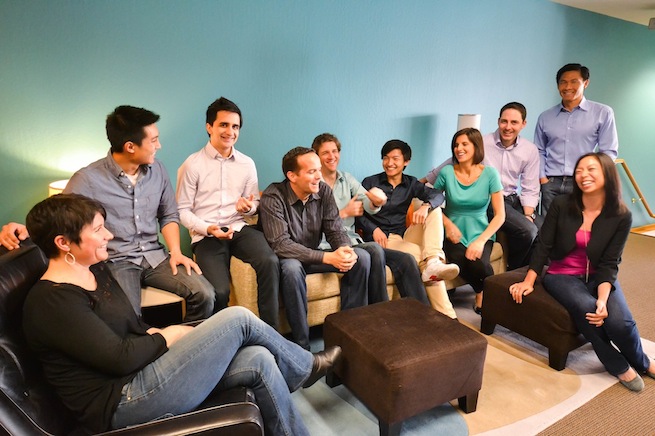 Upstart, the startup that can help recent graduates step off the treadmill of a corporate career, just closed its first round of funding.

The San Francisco-based company, which has been described as a “Kickstarter for people,” secured $5.9 million in investment from a roster of high-profile investors, including IronPort cofounder Scott Bannister, Salesforce CEO Marc Benioff, and Google executive chairman Eric Schmidt.

Upstart is the brainchild of Dave Girouard, the former president of Google Enterprise. While working at Google, Girouard hit on the idea of providing grads with a modest amount of risk capital and asking them to use their future earnings as collateral. The idea is that the funding gives them breathing room, so they won’t be locked into a cycle of debt.

It works differently from Kickstarter, as backers invest in individuals — “upstarts” — rather than in teams, projects, or ideas. Upstarts can use the funding for almost anything, and in return they pay their backers on a monthly basis for 10 years, verified annually via tax returns. It’s a fixed fraction of income, and the maximum interest rate an upstart could pay is 5 times the amount they receive. Repayment is based on income, not some fixed amount. 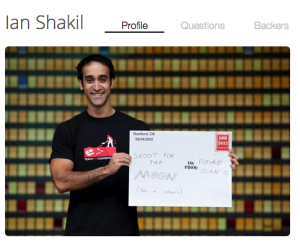 One upstart I spoke with, Ian Shakil, said he was inspired to sign up after graduating from Stanford Business School. He used the $55,000 he raised to get his health care startup off the ground. A handful of his 32 backers hold senior positions at Google, and about 10 have become mentors. “These relationships are far more valuable than the money,” he said.

Upstart graduated from beta in November; since then, many of the individuals who’ve been funded have raised over $50,000. Over 80 current students and recent grads have signed up from universities like Stanford and Harvard, and 135 backers have created profiles to fund them (some choose to remain anonymous). About half of the upstarts are recent graduates of masters and PhD programs, which was a surprise to Girouard. “Having a bit of life experience must help,” he said.

The company just hit a new milestone: Its upstarts have raised a total of $1 million in funding. Like Shakil, many of them have gained new advisors. Backers can offer mentorship as well as funds, but it’s not a requirement.

Above: Dave Girouard, Upstart’s CEO, is the former President of Google Enterprise

Girouard is an enterprise guy by training, so he’s hired a small team of data scientists to develop a complex algorithm that predicts an individual’s income over time. This negates much of the risk backers face when they make an investment. It can also be used to calculate the right percent of an upstart’s income to share each month, once they have chosen their funding amount.

“The payment is designed to be friendlier than a student loan and accommodate life events, even unemployment,” said Girouard. The company makes its money by taking a cut of the transaction, similar to other crowdfunding sites.

When the company launched, Girouard received mixed responses from the public. Internet commentators accused him of promoting a modern equivalent of indentured servitude. But he says the model is quite the opposite: “We allow you to pursue what you want to do, not what you have to do to repay a loan.”

In future, the company hopes to partner with nonprofits and other organizations, so more individuals in need will sign up. To reach students from low-income families, Girouard has brought in Kiva cofounder Jessica Jackley as an advisor, as well as former Nebraska Senator Bob Kerrey.

Investors that participated in the first round also include Khosla Ventures, Founder’s Fund, and Collaborative Fund. Upstart has also raised $1.75 million in seed investment from Kleiner Perkins, NEA, and Google Ventures.

Related video: I spoke with ABC’s Jonathan Bloom for a brief news segment on Upstart:

Upstart created a birthday card for Upstarts and backers to celebrate its anniversary. Check it out — and let us know if you’d fork over a small portion of your income for the next decade in exchange for funding?

Note: Unlike the story about Sarah Hanson, a teen that auctioned off her future income in exchange for startup funding, Upstart is very real.