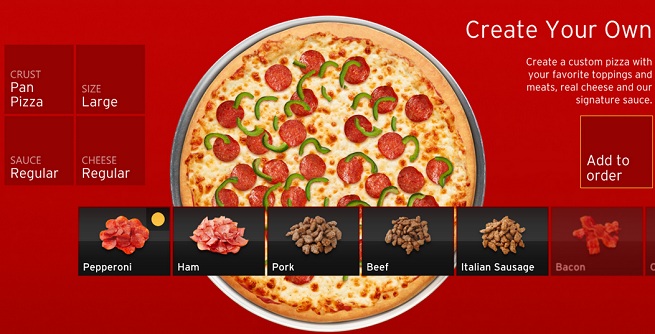 So it’s about time that they can finally order Pizza Hut pizza from within Xbox Live itself. Microsoft and Pizza Hut have announced that U.S. members of Xbox Live (which now has 46 million users worldwide) can order pizza using an app on the Xbox Live dashboard. It works with a game controller or Microsoft’s Kinect motion-sensing system.

That means you can use voice command, gestures, or a game controller to order your pizza. All you have to do is link your Xbox Live account with a Pizza Hut account. When you log in, you’ll see a menu for a local region and pick the nearest pizza place. For the first two weeks, Xbox Live users will receive a 15 percent discount on orders placed from the Pizza Hut app.

“Who doesn’t like pizza?” said Larry Hyrb, also known as Major Nelson and the voice of Xbox Live, in an interview with GamesBeat. “You can directly place the order on the console and queue it for a future delivery time that works for you.”

Professional Halo player David “Walshy” Walsh is helping to promote the partnership. Pizza Hut launched its first Internet ordering app in 1994. Formal online orders were available via the web in 2001, and in 2008, Pizza Hut enabled ordering via text messages and launched an iPhone app. In 2011, Pizza Hut launched apps for the iPad, Windows, and Android.