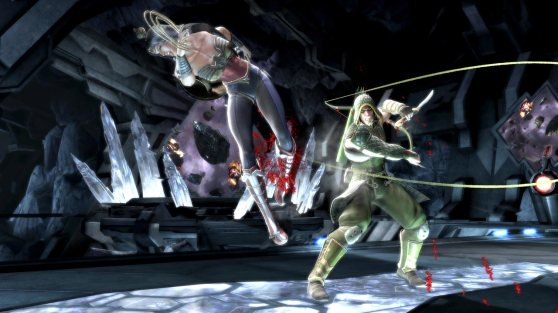 Injustice: Gods Among Us is a silly name for a game focused on one of the most disastrous “What Ifs” in DC Comics: What would happen if Superman lost his mind? The answer is create a menacing one-world government fueled by his descent into madness. Built in a similar style to NetherRealm Studio’s successful Mortal Kombat games, Injustice scales down the gratuitous violence just a tad and replaces it with sheer superhuman spectacle.

I’m the biggest fan of Mortal Kombat vs. DC Universe, but Injustice redeems itself with a touching and well-executed story mode that makes you feel like you’re doing more than playing one arena fight after another. Most of all, NetherRealm manages to make the audience care about Superman — a feat rarely achieved thanks to the character’s seemingly impervious moral code.

Good, dynamic Superman stories are possible. Legendary comic book writer Alan Moore proved that in For the Man Who Has Everything, a story arc in which Mongul (the ruler of the weapon-planet Warworld) imprisons the Man of Steel in his mind, and the only means of escape is to destroy what he cherishes most. Injustice takes that sentiment and makes it a thousand times worse, and sprinkles in a touch of interdimensional travel.

Characters in Injustice build individual fighting styles off of the same basic set of controls. One quick combo for Superman has the same controls as a similar attack for Batman, but only the speed of the strike differs. Heroes (and villains) that use special powers, like Green Lantern and his ring, also have switchable fighting stances. Injustice introduces these mechanics with Batman and Superman. Once you master those two, you can control anyone. The real difference between “tech” and “super-powered” characters is just how fast they are.

Where the combat really shines is Injustice’s clever take on the classic Mortal Kombat fatality. Rather than splattering ridiculous amounts of blood everywhere, these special supermoves highlight the excesses of a character’s power. When you use Hawk Girl’s special attack, she grabs her opponent by the collar and hurls them into the sky, where she repeatedly beats them with her mace before hurling back toward the ground. You get a light amount of blood splatter from this, but you’re more overwhelmed by the sheer spectacle than by the gore. She didn’t have to repeatedly bash your face in while falling through the air, but it sure looked cool.

The best thing about Injustice’s design is that it works well with a normal controller. A lot of fighting games feel stunted when you use a standard directional pad or analog stick instead of a fighting stick, but Injustice keeps up. I’m sure I would have had an easier time besting the A.I. if I were using a stick, though. 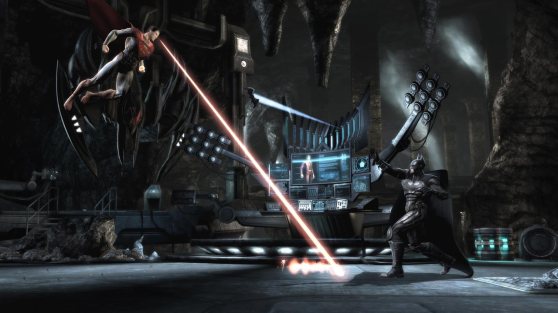 I love Injustice’s story. It’s rare that I find myself caring about Superman. He’s too good, too shiny, and that generally leads to flat stories about triumphing over evil. But when his stories truly captivate me, Superman is struggling with himself to do the right thing for mankind. Without giving too much away, this tale utilizes many of the same elements found in Greek mythology, primarily Hercules’ stories. Hercules and Superman are very similar – both are powerful figures but are often blinded by their naïve hope that the world isn’t full of corruption.

Injustice preys on Superman’s worst fear: that he is unknowingly used as a weapon. This has direct ties to a Hercules myth where he commits terrible acts of violence thanks to Hera’s manipulation. In Injustice, the Joker assumes the role of Hera as he pushes Superman beyond his breaking point.

Mostly, I really like being able to draw mythical connections in popular culture.

Smashing through walls and throwing missiles

One of the most iconic things about superheroes is how most of them use their environment to do the fighting. Throwing cars and crashing through buildings is an everyday occurrence in most comics, and brought to life in the interactive stages in Injustice. Each arena has two segments that fighters can bash through. If you’re unlucky enough to get thrown from one part of the stage to the other, you’ll see your character crash through walls, planes, and giant fans as they tumble to the next area.

Beyond throwing people around, each stage also has usable items like discarded missiles and cars. Correctly timing your attack near one of these objects will cause your character to pick up or smash someone into them with all their might. My particular favorite moment was repeatedly smacking the Flash with missles as he tried to throw me.

The trouble with playing fighting games online is that a lot of players will focus on easily exploitable tricks and moves to dominate the rankings. From my admittedly brief experience with this, I saw a lot of ranged characters crouching in the corner of the screen just spamming their long-distance attacks. I’ve even seen two of the same character repeatedly shoot at each other in the most boring fight, ever.

Rather than risk attacking up close and deal with the quagmire of blocking and throws, a lot of people playing online right now focus on such exploitative tricks. I didn’t particularly enjoy how gruff assassin Deathstroke moved while playing through the story mode, but every other person I encountered online used him. Deathstroke as a relatively simple long-range attack and is the main offender in crouching on one side of the level and just unleashing hell.

Hopefully, as more people start playing Injustice, this experience will change. Right now, I am so sick of seeing Deathstroke fight himself. 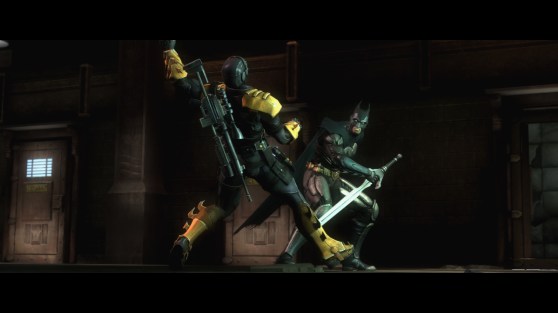 Fighting titles are notorious for imbalanced challenge in their later stages, and Injustice definitely suffers from that. But the challenge I faced while finishing up the story and battle modes was the A.I.’s overreliance on a small set of moves — most of which are virtually unblockable throws. You can counter a throw in Injustice, but the timing is difficult, and I’ve honestly not pulled it off outside of the slower-paced training sessions.

Did this color my opinion of the A.I.’s behavior? Absolutely. I do not enjoy the feeling that I’m punching at a brick wall that seems to get priority over every combo I pull. You can do some amazing, and devastating, things in Injustice, but the artificial intelligence is right behind you. My strategy against this was spamming a quick set of moves in turn so I would move in fast and do a simple three button sequence to keep the A.I. at bey.

I don’t like playing that way, but I was beating the computer at its own move-spamming game. Hopefully you have better luck countering throws.

I really love the interactivity found in Injustice, but sometimes it simply doesn’t work. Using items against your opponent is the same as executing a throw, only when you input the move in front of an interactive set piece, you will use that rather than the scripted throw animation. This requires you to position yourself with care or time your jumps so you can bring ceiling elements down on your enemy’s head.

The trouble is that when you’re rushing back and forth across a stage, this is often cumbersome. I rarely used the ceiling attacks, largely because the A.I. seemed to always lock onto them perfectly despite my repeated attempts to use the action previously. Stage transitions also seemed very tricky to use correctly, and most of the time I had to wait for my opponent to throw me before I could see the rest of a stage.

These are really cool elements in theory, but the often hectic pace in the average fight makes using items and transitions tricky. 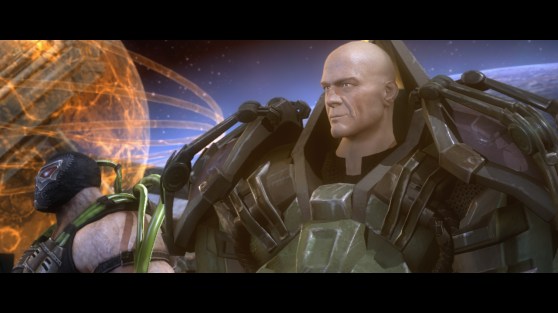 Injustice’s greatest strength is that it makes you feel powerful regardless of your skill level. Even when you are struggling to overcome a series of grueling attacks, breaking through that with a well-placed combo or ridiculous supermove brings out the wonder in controlling an iconic hero or villain. NetherRealm was very clever with how they brought out the Mortal Kombat in Injustice. You get just enough MK for the fighting system to feel familiar, but not enough that you’re constantly suffering at the hands of other players who are much more experienced.

I wish Injustice felt more balanced. Maybe it’s the unpredictable nature of the interactive environments, or the frustrating move-spamming, but I frequently felt I was beating my head against a wall. Injustice really wants to bring in inexperienced players, and it is very approachable at first. But playing online or slogging through the various challenge modes becomes infuriating as you pick up on how your opponents exploit the game in ways you likely won’t understand at first.

Injustice: Gods Among Us is a fighting game released April 16, 2013 for the Xbox 360, PlayStation 3, and Wii U. Warner Brothers provided an Xbox 360 copy of the game for this review.