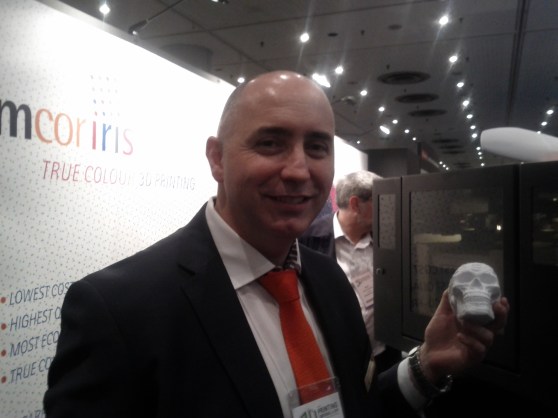 Unlike the plastics-based printers of companies like Makerbot and 3D Systems, Mcor’s Iris printer creates 3D objects with layers of paper.

Mcor CEO Conor MacCormack says using paper gives the Iris a number of advantages over other printers, the most obvious of which is that the Iris can print out some impressively colorful 3D objects. (See the iPhone photo below.)

“Because we use paper and a water-based adhesive, the color that you have on the screen is very close to the color of the printed parts. And that’s unique,” MacCormack told me.

And he’s right: While plastics-based printers create some impressive objects, they’re not particularly comprehensive on the color-font, to say the least. 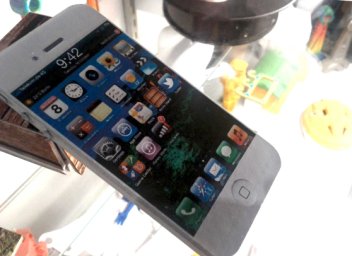 Above: You may not believe this, but this iPhone was 3D printed with, um, paper.

But while the quality of the printouts is a big deal, MacCormack says the more key advantage of Mcor’s tech is how much money it saves designers.

“The big issue, and why we got into 3D printing in the first place, is the running cost. It’s one thing to reduce the costs of  machines, but that’s not too helpful when the running costs are going in the opposite direction,” he said.

Basically, Mcor’s tech not only allows designers to print out full-color designs, but it does so in a way that’s highly affordable.

(It was here that I asked, as any good journalist should, for concrete numbers: How much does printing in paper as opposed to plastic actually save designers? Sadly, MacCormack didn’t have the numbers in front of him, but he did say the savings were “significant”. )

The other neat thing to note about Mcor is that the company last year teamed up with Staples to bring 3D printing to Staples stores. While the initial trials have been limited to the Netherlands, MacCormack says it’s not too crazy to assume that Staples could one day bring the partnership elsewhere — in particular, the U.S.

“It’s up to Staples to decide, but eventually you’ll be able to upload your designs and have them printed out at a local Staples store,” he said.

So instead of printing on paper, Staples could one day let you print with paper. Welcome to the future, folks.