SAN FRANCISCO, Ca.: The dirty word that no one would address at Dell‘s press event this afternoon? “Privatization.”

The computer maker held the press event to introduce the press to its new software group. But the meeting was overshadowed by news this morning that private equity firm Blackstone has dropped its bid for Dell, bringing an abrupt halt to the company’s plans to go private. The New York Times reported that Dell’s board has no one but itself to blame for the debacle.

Dell execs would not respond to requests for comment on the failing deal, preferring to remain tight lipped about the whole business.

With a media firestorm swirling around them (and press hungry for answers), Dell execs hope to settle customer and partner anxiety with talk of their “big data” and cloud software products. The company is pushing on with plans to provide hardware and software to existing customers, primarily mid-market companies.

“Dell has been thinking about this transition to software for a while,” said David Kloba, a general manager for Dell Software, who joined the company by way of acquisition. But Kloba admitted that even two years ago, his team met with the sounds of “crickets” when he broached the topic of software at Dell. Now it’s considered the future, especially given that PC sales are in decline. 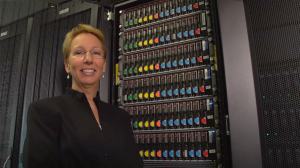 Dell’s software practice is a essentially a melting pot of products it has acquired over the years. Carol Fawcett, the chief information officer for the group, got the job after Dell acquired her company, Quest Software.

“Dell wants to be an end-to-end solutions provider, a one stop shop,” said Fawcett in an interview. “But we don’t want to be another Oracle.”

Fawcett said her team is focused on expanding the current software suite, which already includes units dedicated to mobility, data protection, and security. Fawcett said Dell’s products can meet each customer’s IT needs — whether it’s a single product or a full solution.

But just like its privatization plans, Dell is in a precarious spot. Joshua Greenbaum, an IT analyst with Enterprise Applications Consulting, said it needs to make a choice between offering the “integrated portfolio … the soup to nuts” and offering software that “fills a gap.” “It’s hard to do both,” he said.

For now, Dell’s vision is expansive. Both Fawcett and Kloba welcomed a comparison to consumer device giant Apple, albeit with more of an enterprise focus.

Fawcett also referenced another competitor in the small- to medium-sized business space: Intuit, the maker of QuickBooks software.

“Mid market is our bread and butter,” she said. When asked about whether Intuit and Dell will be the two companies associated with software for SMB’s, Fawcett immediately shot back, “I’d say Dell.”