Almost a year ago, MightyText launched with the promise of providing an iMessage for Android, but better: It let you text anyone, anywhere, from whatever device you’re using, whether phone, tablet, or computer. Today, three million installs later, the MightyText platform is moving beyond texting to … everything.

“We’ve opened authentication and sockets on all your devices,” cofounder Maneesh Arora explains.

What that means, essentially, is that MightyText has trusted, secure connections between all your technology. And that those connections can be used to transfer almost anything.

The company is starting with photos, announcing real-time photo and video syncing between your Android phone and your PC or Mac. I watched Arora take a photo on his smartphone and saw it pop up almost immediately on the MightyText app on his MacBook — a much more immediate experience than what you get with iCloud, which typically takes a few minutes, and sometimes hours, to sync photos via Apple’s Photo Stream.

But photo-syncing is just the beginning. 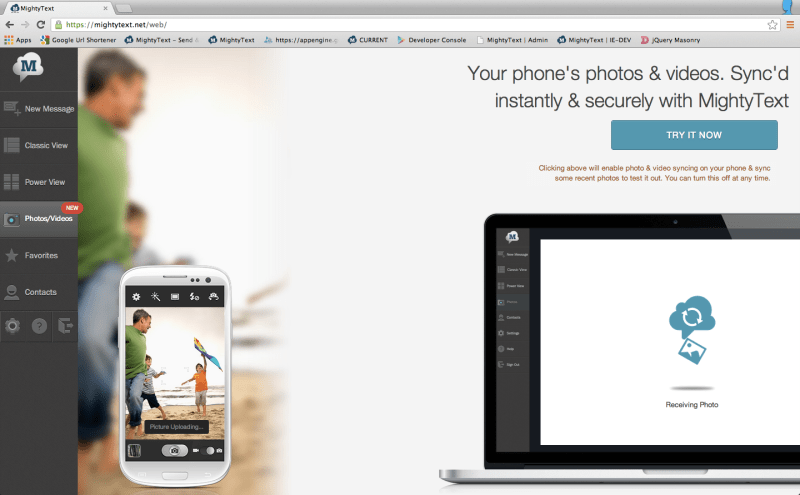 “Everything on your phone should be everywhere all the time,” Arora says. “No one raves about iCloud, and we feel there’s an opportunity. There will soon be billions of Android devices, and no one’s making it easy.”

It’s good timing, and not just because  iCloud just had an outage yesterday. It’s good timing because, while our phones are the most personal of our devices, they can be islands of content and capability that don’t translate well to your laptop or tablet.

So Arora sees the possibility of leveraging his MightyText platform, which is on pace to route about six billion texts annually, for much, much more.

Essentially, what MightyText has created is the plumbing and wiring for a personal data sharing platform, which can then open up an API for any other apps that want to communicate to the desktop or send data and documents to a user’s other devices.

“That’s in our plans,” Arora says. “We also have some professional features coming soon, such as scheduling texts, managing multiple phones, a B2B play for enterprises, especially as BlackBerry moves out of the enterprise and companies need to manage 50 or 50,000 devices centrally. And we’ve seen that people will pay for storage.”

Building a platform for personal sharing has been part of the plan all along, Arora says, calling MightyText more of a productivity play than a messaging app.

“This is just the beginning,” he told me. “We can do any file type, any media type, install and uninstall apps … ”

Currently MightyText works on your tablet or laptop via a web-based interface to its cloud software. However, the company has a native Mac and native Windows client in beta right now — Arora was using it as we video-chatted — and they’ve included native OS-level notifications, so your texting and syncing experience will be as real-time as possible.

Also of note: MightyText is currently building a Gmail plugin that will let you text right from your Gmail account.

“We just want to be a useful product,” Arora says. “We’re trying to find nuggets of value throughout a user’s day.”