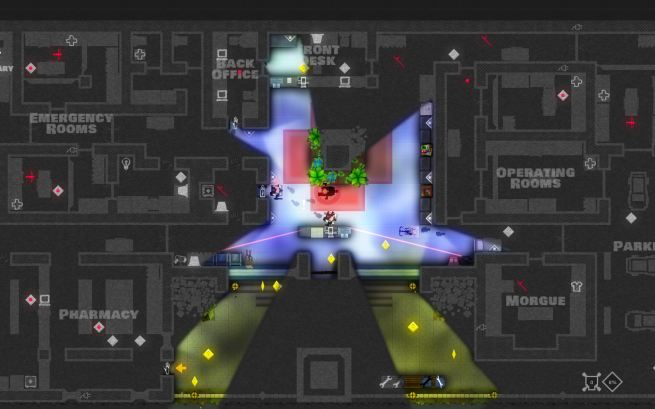 Co-op gaming is often magical. When done right, it enables gamers to team up and have a great time with friends and family that are not as skilled as they might be.

Monaco, out now for PC and soon for Xbox Live Arcade, does co-op right.

Monaco is a 2D stealth-action title that stars a number of differently skilled criminals. The plot has them robbing banks, jewelry stores, and just about anything else that might have valuables.

Like most robberies (not that I would know), you can lay down an intricate plan, but it’s better to stay on your toes and adapt to the situation as it unfolds.

Developer Pocketwatch Games introduced Monaco in 2010 at the Independent Game Festival, where it won the top prize for its multiplayer gameplay. It’s clear that lead designer Andy Schatz had nailed down the co-op early on. What was less clear is whether Pocketwatch was able to justify Monaco as a single-player experience.

Monaco offers up plenty of opportunities to do that, and it really works as a co-op game. The single player? Well, not so much.

Monaco is at its best when you have a full team of thieves and robbers all tackling one level at the same time.

Sure, you can take your time with a bunch of other highly skilled players to make sure everyone knows their job and how to approach the objectives. That works, and it’s fun.

It’s equally fun to go into the game with your less-skilled friends that just want to blindly rush the stage.

It’s hilarious to have a couple of players sneaking around only to have one person trip the security system and watch as everyone fans out like lunatics in search of a hiding spot.

Monaco as more than a half dozen characters to choose from for many of its levels. Each of those thieves has a special ability, and players tend to gravitate toward the one that best suits their play style.

Passive gamers might work well with The Lookout, who can see enemy locations and movement through walls. Aggressive players might like The Cleaner, who can knock out opponents by running them over.

I prefer The Mole, who can dig through walls but makes a lot of noise when doing so.

The possible combinations of teams offer up a plethora of ways for players to interact with Monaco’s systems. It’s magical to discover solutions to problems by playing around with your character’s abilities and to see how they enable another player to better use their skills.

Monaco supports both online play with matchmaking or local multiplayer for an amazing couch co-op experience.

The visuals have a strong style

Monaco is the latest modern title to take on the simple aesthetics of earlier games. Players view all of the action from a top-down perspective, and the characters are just a few blocks stacked on top of one another.

Despite a deluge of titles that use 8-bit games as a visual reference point, Monaco’s imagery does manage to stand out from the pixel-art crowd.

The top-down viewpoint allows the developer to emulate line-of-sight vision, where the player can only view what the onscreen character would actually see. It grays out the rest of the level. This creates a neat graphical effect; the vision cones swoop across the level and through open doors as you’re sneaking through hallways.

Each level also has several nice graphical touches that help bring the 2D world to life. Running water, security lasers, and a colorful dance floor are just a few examples. The menu system’s block typeface and slightly glowing neon design is another.

It takes time to understand what you’re looking at

Monaco is a very pretty game, but its visuals do cause some problems. I had a few times where I didn’t really understand what I was looking at.

The perspective and simplified visuals provide a lot of information about the world, but it takes a few hours to really decipher what is important and what is not.

It can be difficult to always know which way a guard is looking or whether a certain block is passable. When you’re with other people, this isn’t as much of an issue since others can quickly help you out. Solo players might find it more frustrating when it gets you caught and you lose a life.

Single-player campaign can get lonely

Monaco totally works as a solo game. It just isn’t quite as fun.

In single-player, you choose one character and try to beat the stage. If you die, you pick up from a checkpoint with one of the other characters. Weirdly, nothing is really permanent. If you knock everyone out with The Cleaner and die, all of those enemies come back after you pick up from the last checkpoint.

The developers have a deep score-tracking system. If you start score chasing with a few friends, I could see the solitary game offering up a lot of excitement, but it can’t match the rush of working together with other humans.

Monaco is an amazing co-op game. It works both as an arcade-style romp and as strategic game that rewards deep thinkers.

If you don’t want to play with others, however, I would skip it. Everyone else should invite some friends over for some wild elbow-bumping couch cooperative action.

Monaco is out now on PC and soon on Xbox Live Arcade. The publisher provided GamesBeat with a download code for the purposes of this review.