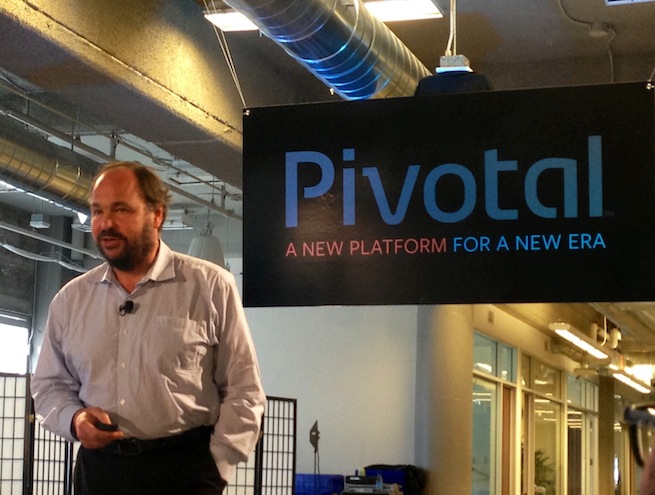 SAN FRANCISCO — EMC spinoff Pivotal is launching today under the tagline a “platform for the new era.”

At a press conference at Pivotal’s office in San Francisco, CEO Paul Maritz introduced the vision for the new cloud and “big data” initiative, and he was joined on the stage by various EMC employees.

Maritz is the former CEO of VMware, the virtualization giant acquired by EMC. EMC would later acquire Pivotal Labs in March 2012. “But we’re independent of VMware and EMC … and can work them or collaboratively with their competitors,” Maritz explained.

‘We’re sitting on the shoulders of giants’

In a somewhat surprising twist, Maritz announced that Pivotal has a “new owner.” General Electric (GE) poured $105 million into Pivotal to “bring GE and our customers into the great capability that software can bring to our business,” said GE CEO Jeffrey Robert Immelt via a live video stream.

“Pivotal will give us the ability to manage a lot of our data in real-time and put it to use on behalf of our employees and customers,” Immelt said.

Pivotal is bankrolled by giants and will launch with customers — so what does it actually do?

Maritz spoke in fairly broad terms about the initial suite of products, but he stressed that there is no “easy, cost effective” way to manage large-scale architectures. “That is a strong hint that a new platform is waiting to be born: a third-generation platform,” he said.

But despite their best intentions, Pivotal is no startup. It has inherited assets and hundreds of employees — primarily engineers — from EMC and VMware. “We’re standing on the shoulders of giants,” Yara later admitted. “This is not a ‘two guys in a garage’ type of startup.”

Rumors have been flying about Pivotal for months; in December, VMware hinted at the formation of a new business unit on a console blog. As VentureBeat reported, the spinoff would enable VMware to focus on infrastructure.

With boatloads of funding behind it, Pivotal has broad ambitions for its first products. Maritz stressed today that it’s is “not just a cloud platform.” Pivotal’s developers are primary focused on creating a new platform as a service (PaaS) technology. PaaS sits in-between IaaS and SaaS, providing an environment for developers and companies to host and deploy applications more easily. Analysts predict that PaaS will be a huge industry in the coming years.

Pivotal is also launching with a full data science team to accelerate its customers’ analytics projects and will offer services and support for open-source projects such as Cloud Foundry and Hadoop.

Pivotal has a big vision, copious assets, and millions in the bank, but it remains to be seen whether it can execute.