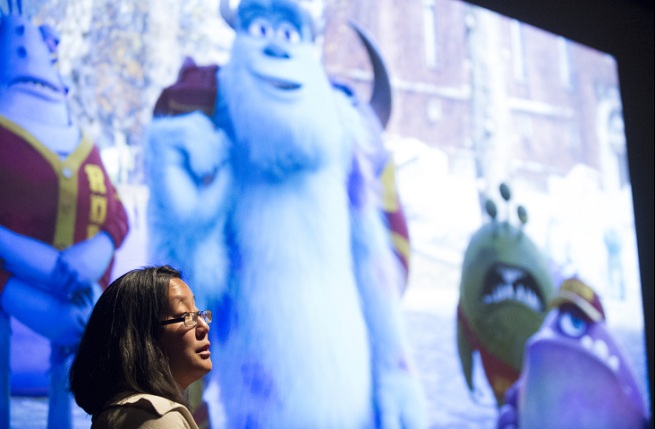 Creating an animated feature film takes an army of artists. But Pixar’s Monsters University movie, coming out June 21, also took a bunch of technologists who had to solve difficult problems like properly illuminating scenes without melting down a data center. 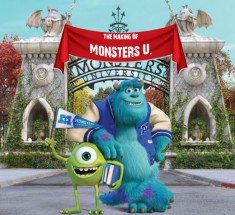 Pixar’s Monster’s University took more than four years to create, and much of that work was technological in nature. More than 100 technology engineers worked on it, and it took more than 100 million CPU hours to render the film into its final form.

Pixar had to double the size of its render farm, a room full of servers, to create Monsters University. And each frame was so sophisticated in terms of artistic detail that it took 29 hours to render, said  supervising technical director Sanjay Bakshi in a talk at Pixar’s headquarters in Emeryville, Calif.

Part of the problem was that there were, on average, more than 25 detailed animated characters in every shot. And there were 6.2 limbs and 3.7 eyes per character. All of that had to be computer-animated because it was far too complex to be animated by hand, said Christine Waggoner, (pictured at top) simulation supervisor on the film. Roughly 89 percent of the film is built from computer simulations, she said.

Everything, from the movement of cloth and vegetation, is designed to look natural. Characters such as Sully, the big blue monster, have 5.4 million hairs in their fur, or five times as much as the original film. A dozen years ago, with the first Monsters Inc. film, the scenes were far less complex. This time, all of the programs for creating hair, fur, and other details had to be totally rewritten. A typical scene has anywhere from 300 to 500 lights, said Jean-Claude Kalache, a lighting expert at Pixar.

In a visit to Pixar, we heard Waggoner, Bakshi and Kalache talk about the technology behind Monsters University in a presentation. We also interviewed them separately. Here is an edited transcript of that conversation. 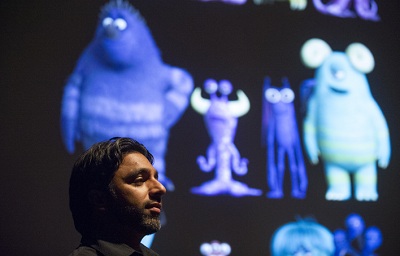 Above: Sanjay Bakshi, a techie

VentureBeat: What was the hardest thing to do from a technological view?

Christine Waggoner: The cloth and hair were pretty tough. I think it’s deceptively simple, the idea of Sullivan wearing a T-shirt. There have been other instances of clothing on hairy characters in the past, but it’s not the same problem. Sullivan’s hair is long. You can’t just make all the hairs along the boundary invisible. The cloth is a dynamic thing. It moves and slides across the boundaries of the hairs. There isn’t a simple solution – “Just paint away the hairs underneath!” The shirt can slide up at any time. Allowing for that freedom was difficult. The other thing is that you can’t just pretend that Sullivan’s T-shirt is big and baggy and say, “Just keep it away from the hair!” He’s a very big character, and the shirt was supposed to be tight. The hair is very fluffy and there’s just a whole lot of it.

Sanjay Bakshi (pictured): And it’s a story point that he wears that shirt. It’s in a lot of shots. He has to act and perform in those shots. It was definitely a big simulation challenge.

VentureBeat: Does it seem like interaction is the hard part? Characters bumping into each other in a very crowded scene and things like that. Does that become a hard thing to accomplish?

Waggoner: It can be. When it’s a crowded scene and there’s a lot of interesting, it’s easier to get away with some cheats. It tends to be when characters are really close up on camera, those hero moments, that’s what makes it more difficult. The other thing is that animators need to pay attention to what is important for the performance and for animation. There can be specific limitations that make a great performance hard to simulate, where we have to find ways of making it look natural while preserving the performance. 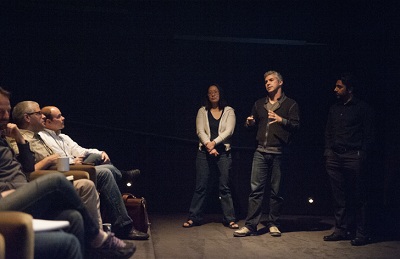 Above: The Pixar physics experts

VentureBeat: Doubling the computing power seems fairly tough, but I guess in the same time period, computing power has gotten much cheaper. Are you already stuffing in a lot of new computers every year anyway, because they’re just cheaper to upgrade than the five-year-old machines?

Bakshi: Computers are cheaper, but the high-performance storage and backup requirements and networking requirements are still very costly. It still costs a lot to add a thousand computers to the render farm. At that scale, people say, “Why don’t you just throw in more memory?” The memory we use has to be the best memory. It has to have fast access and so forth. So it’s still prohibitively expensive to add tons and tons of processors.

VentureBeat: Is it about 2,000 servers? Is that around what you guys have?

VentureBeat: Does that count as a top 500 supercomputer, then?

Bakshi: Of the published ones that we know about, it would be in the top 25.

Jean-Claude Kalache: It’s tempting to just say, “Let’s throw in more power.” But if you say, “No,” we all go through the exercise and find solutions – software solutions – that otherwise we wouldn’t have picked up on because we had unlimited hardware resources. It’s a fine balance between how many you really need and how many you can bypass by thinking smartly – building a world that’s more optimized or lighting differently.

One of the biggest concerns I had with our technology is that while we’ve proven, with the prototypes, that we can minimize or reduce complexity, I was worried throughout the show that we would abuse the technology and go back to a really complex world. We spent a lot of time training our team, and learning from them as well, so we don’t get tempted into that kind of huge explosion of complexity. 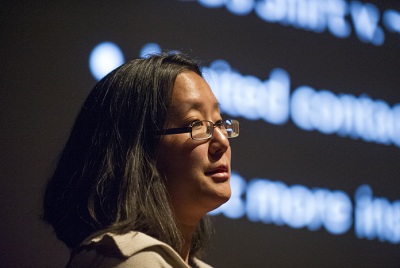 Bakshi: We spend the same effort on optimizing the scenes so they render efficiently as we ever have, even though computers and memory get more powerful. We still have to spend a lot of time on that. We always make the scene more rich or more complex. We always keep adding things to make it more visually interesting.

VentureBeat: Saschka Unseld, The Blue Umbrella director, made a comment that they created some things and sent them to be rendered and it didn’t work. They had to reduce the complexity and send it back again. Is that a process that happens a lot for you guys, where you have something that’s just way too complex?

Kalache: We have what we call gates. Every department has to deliver inventory to the next department, but it has to go through a gate. In that gate, we look at complexity, if it’s manageable. It might be okay for you, but it may be unusable for someone else. If you model a building, it might be fine for you, but the next department needs to make 20 copies of that building, and that adds up. So there are gates – speed gates, memory gates, different gates that we try to police very carefully. It will add up quickly if we’re not careful.

Bakshi: The feature films are a little different than the shorts. The shorts will be pooling assets, and their production schedules are so tight that they don’t have as much time to build everything from scratch and be careful. Whereas with the feature films, we have a very rigorous process of measuring and making sure things aren’t too expensive as they go downstream.

VentureBeat: The color guys had this interesting comment where they were talking about keeping a character’s face in the light, versus Hardscrabble’s face, where it’s backlit and the face is dark. They said they had to cheat sometimes to do that. It seems like what would be wonderful is if you could someday simply build the world and position these characters in it, and then light would fall on them the way it’s supposed to.

Kalache: That would definitely help, kind of like live action. But if you look closely at live action, every shot is cheated, just because things don’t work naturally out of the box. We do draw a lot of inspiration from live action. I feel like our cheating today has gotten much better, in the sense that it’s simpler to cheat. But I do agree that if somehow we can see it all at the same time in the future — with the lighting, with the spotlight – then maybe we’ll cheat less. It is an interesting path that we’re taking as we implement in the future.

Above: Sully’s jacket was hard to make.

VentureBeat: When I’m playing a game, the time when it really slows down sometimes is when there are 20 things happening in the same frame or the same scene. Is that the same problem that you would run into, where you have too many monsters running around?

Kalache: From a lighting perspective, it’s sometimes the opposite. If you have a scene with a thousand monsters and a scene with one, the likelihood of you noticing what all the thousand monsters are doing is almost zero. So the lighting is very simple. But if you have one character in the scene for a full 30 seconds or so – a model like Mike with the big eye and highlights and gleam – all of a sudden you start noticing a lot more details, because it’s just the one character. That scene might be more complex lighting-wise, to bring out the details and interesting things, than a scene with a thousand monsters. It depends. 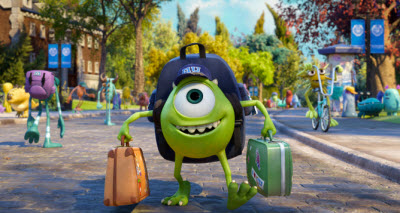 Above: Mike, the lead character of Monster’s University

Waggoner: From a simulation perspective, generally we don’t simulate all thousand characters at one time. It’s definitely complex to manage all those characters, but it wouldn’t bog down in the same way that a game would bog down, because we’re not trying to do everything in real-time.

VentureBeat: If I look at Mike as a character, he seems very simple to me. When you guys look at it, is there some complexity to something that’s as simple as Mike?

Kalache: The eyes are the window to the soul. Mike’s eye is the biggest piece of real estate on the screen, and that’s always challenging for us. You can always see a reflection of who he’s talking to or what he’s looking at. It’s always the eye, in Mike’s case.

He’s very interesting, if you look at details. He’s very complex, but in a nice, subtle way. He has lots of freckles. He has the retainer. Depending on your lighting situation, you might reveal a lot of freckles and stop looking at the eye, so we have ways to control the freckles. Or if the retainer catches a lot of highlights, that’s distracting, because you’re trying to focus on his eye. I always tell my lighters to be very afraid of the simple shot, because that’s the one that has a lot of people’s attention, mine included.

Bakshi: If you think of Mike from an animation standpoint, this is a movie about Mike. He has to be so expressive. You have to believe that he feels the emotions he feels. You can imagine, under the covers, there are tons of animation controls to make him that expressive.