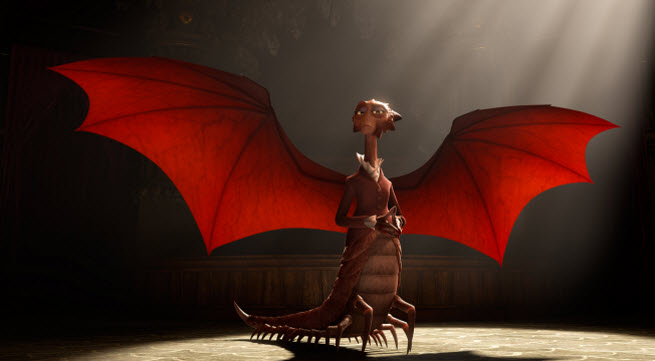 No one likes to make a change late in the movie. It’s costly — you wouldn’t believe how costly — and can throw a film off schedule. But Pixar’s creators are known for their ruthless editing and revisions, all in the name of creating a better film for the audience.

Pixar director of film Dan Scanlon had to balance those concerns when he made a major change to one character. The film had no strong female characters in it, as originally conceived. He decided to change the main “villain” of the film, the Dean of the Scare School, from a male to a female. Dean Hardscrabble, pictured above, is the product of many animation nightmares.

Because Scanlon put his foot down, the team had to find a new actress to replace the actor and record the script again. The character designers, such as Jason Deamer and Ricky Nierva, had to conceive of a brand new character. They did research on different kinds of creatures. Finally, somebody came upon a giant centipede, found in places like Peru, Vietnam, and Thailand. They brought one into the office to show to the artists. But a doctor warned them, “If you are bit by one of these things, you are not going to die. But you will wish you died.”

They morphed that giant centipede with bat wings and a lizard’s face. The wings are hidden in the back folds of the jacket, so they can be a scary surprise in the film. 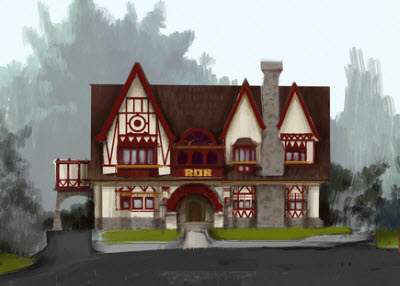 The buildings are alive

Robert Kondo’s job was the “monsterfication” of the university. The school resembles an Ivy League campus. But it had to be modified to fit within the story. So Kondo’s team had to become architects for a monster’s school, creating a monster-size drinking fountain, for instance, where there was a tall fountain for a tall monster and a short one for a small monster. Some of the doors have large openings and some have smaller doors embedded within them for the smaller characters.

Kondo reused archetypal images such as a trapezoid, which conveyed the heft of a monster’s shoulders, over and over. He also used fangs and horns, putting the equivalent of monster faces into the facades of buildings.

“We had to stylize the buildings for the monster world,” he said.

In this landscape design, technology also had to play a role. One of the traditions at the university was that incoming freshmen would rub a spot on a statue for good luck as they entered the school for the first time. The tech team had to render that spot on the statue so that it was both worn and shiny, so that the viewers could see the effects of that tradition on the statue’s paw. It took considerable, realistic animation technology to make that part of the statue, which was visible only for a second, more realistic.

Cheating in a believable way

The team works extremely hard on making sure that anything Another way that Pixar saves time is by cheating. To fans, it might seem like Pixar has built a fully simulated 3D world, like the landscape in a video game, where you can go anywhere. In truth, Pixar has built whatever has to been seen in the movie. No more, no less.

If a fully simulated world existed, it would be easy to position the monsters so that the light source was behind them or in front of them. This was a big deal since the optimistic characters like Mike always faced a light source, so their faces were brightly lit. The positive characters were sunny. The negative characters, like Dean Hardscrabble of the Scare School, were shadowy. So Dean Hardscrabble was backlit, so that shadows crossed her face in every shot. Dice Tsutsumi, a lighting and color expert, wanted consistency across the characters in this respect so that the mood would be clear to the audience.

The lighting even comes into the story. Early in the film, the light falls on the face of one main character in a certain way, while the other’s is shadowed. As the fortunes of those characters change, the light and shadows on their faces change as well. You may never notice this in the movie, but it’s there, and it’s intention is to affect your attitude toward that character.

If Pixar had the budget to build out the entire university and simulate the lighting, Tsutsumi’s job would have been easier. But the team cheated, randomly putting light sources where they wanted them to be, just so the shot could be right.

“There were some areas where we cheated quite a bit, but sometimes if you cheat you create problems with the logic, like the time of day,” Tsutsumi said. “Then it becomes a distraction. As long as it remains believable, it’s OK.”

With the characters, the simulators could also cheat. They couldn’t independently simulate and animate each one of the 5.5 million hairs on Sully. But they identified “key hairs,” or one in every 27 or so that could govern the behavior of a whole patch of hairs. They simulated the key hairs, and everything else looked like it was being simulated. 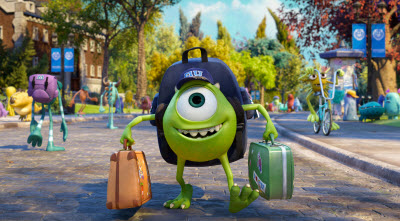 It may be hard to tell at first glance why an animated movie is so hard to create. But the complexity of the scenes is far greater than the original film. All told, Pixar’s character designers created more than 400 characters to fill out the university scenery, which had to seem like it was full of students. Putting all of those students on screen was complex.

The characters fit into different types, such as those that resembled slugs or birds. They had multiple limbs such as tentacles. But following the rule for cartoons, the teams had no more than four fingers per hand.

On average, each shot had more than 25 detailed animated characters. And there were 6.2 limbs and 3.7 eyes per character. All of that had to be computer-animated because it was far too complex to be animated by hand, said Waggoner. Roughly 89 percent of the film is built from computer simulations, she said. 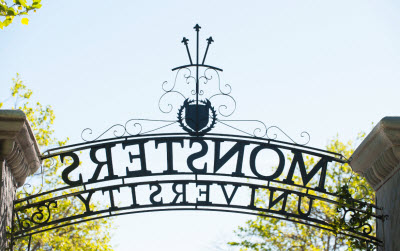 Will all of this technology pan out? Pixar and Disney will find out after the movie comes out on June 21. For most people who see the movie, the result may be that they won’t notice any of this technological wizardry, except maybe the flag waving in the wind. When I first watched the beginning of Monsters University, I didn’t notice any difference at all in the design of the characters Mike and Sully as compared to the original film.

But that’s the way the Pixar team likes it. They believe that all of the work they put into the technology makes the film more believable and immersive. It serves to draw you into the animated world.

“We try really hard so that the technology doesn’t become the distraction,” Tsutsumi said. “It has to support the story.”

It might seem like a lot of work to create these new technologies for every movie. But the payoff in the past has always been big, as Pixar movies stand out as visual marvels. And each investment in a new animation technology usually pays off in future films.

“We plan to use these innovations in our future films,” Kalache said.