You know you’ve always wanted to make your own Star Trek alien race. Maybe you’ve even scribbled down some notes or drawn a picture or two. But what if you could invent the next Klingons and then — here’s the really cool part — watch them come alive in a video game where they can become fan favorites?

Daniel DiCicco stepped away from a private law practice to do just that, and Stardrive (releasing for PC on April 26) is his baby. It’s a 4X (explore, expand, exploit, and exterminate) empire-building strategy game where players create ships and reach out into the final frontier, seeking out new life and new civilizations to align with, fight against, or spy on. DiCicco’s fairly plain about Stardrive’s Trekian influences, and superfans will recognize more than a few homages right down to names, bridge layouts, and transporter rooms. You can do that when you’re the only one making decisions. DiCicco subcontracts art assets out, but the programming and design work is all him.

Except for five of Startdrive’s eight playable races. Those came from other people who thought it would be cool to invent the next Klingons. 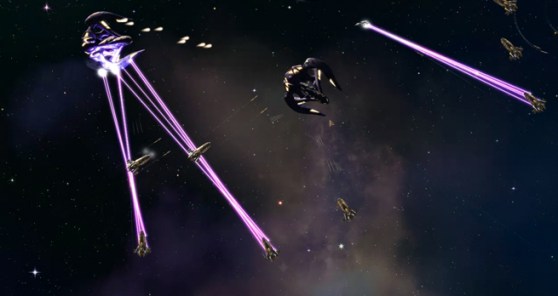 An early Kickstarter success, DiCicco’s game raked in over $17,000 back in December 2011 thanks in part to five $500 backers who received a special reward for their generosity. In addition to a producer credit in the game, they got to help design their own major species in Stardrive’s sprawling universe.

“The cost of creating a whole new race was more than $500,” says DiCicco, “but at the time I went on Kickstater it was a very novice project. I figured that would help a lot.”

It did. Stardrive’s Kickstarter took in a full $10,000 above his original goal and helped DiCicco give up his day job for full-time game development. Of course, now he also had to incorporate other visions into his own. That turned out to be a surprisingly fun process where some ideas came in fully fleshed out and others arrived as rough concepts.

One backer even sent in a paper sketch torn out of his notebook; 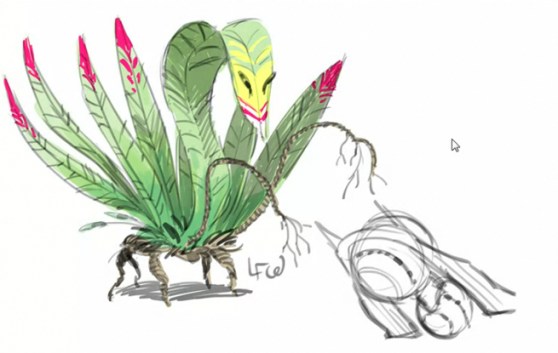 “He wanted plant people,” says DiCicco. “We took that and turned it into the Pollops,” a leafy, sun-worshiping race from the planet Sporl. “Then we designed a bunch of plant-themed ships based on that guy’s feedback.” The result looks even better when you see it in motion;

“Another one wanted these Nazi wolf-type deals,” he adds. It gave DiCiccio something to work with, but fitting it into a game with Stardrive’s intended depth meant fleshing that bare-bones description into a full-fledged society that both made sense and stood apart from the others. He developed the Vulfen as aggressive pack hunters with stomachs bigger than their eyes.

And as a spacefaring race with a customizable fleet, DiCiccio also had to give their ships a signature look. That’s where the Nazis came in handy. “We made their ships based on U-boat designs,” says DiCiccio. To balance out their hostile tendencies, he reasoned their engineers wouldn’t be too great. Vulfen ships use inferior Vulfen parts.

World-building like that gave DiCiccio the leeway he needed to place each new species into his universe and give them a particular niche to occupy. Crowdsourcing the aliens also added more imaginations to the mix, adding to the diversity.

“By far one of the prettier races we did were the Cordazine,” says DiCiccio. “This guy was very involved in the process. He sent me reams of text about what he wanted these dudes to be.”

“He had this concept for this mollusk-like alien,” says DiCiccio, “and its evolutionary path was to create pheromones that mind-controls species around them to do their bidding.” Appropriately enough, DiCiccio lifted the name from a classic Star Trek episode — specifically, from a mind-altering drug Dr. McCoy accidently doses himself with. And since the Cordazine enjoy using their slave races, they have little Owlwok slaves hanging around as well.

It might’ve started as a way to draw funding attention, but the donors’ additions became integral to Stardrive, and might just be what distinguishes it in the 4X genre. With eight very different factions roaming through outer space, picking the right allies to join your united federation becomes crucial … particularly since anyone not invited to the table will eventually try to crash your party. “If the player becomes too powerful, you’ll see the A.I. really start to gang up to defend itself against you,” says DiCiccio. More and more varied races adds to Stardrive’s long-term strategy game.