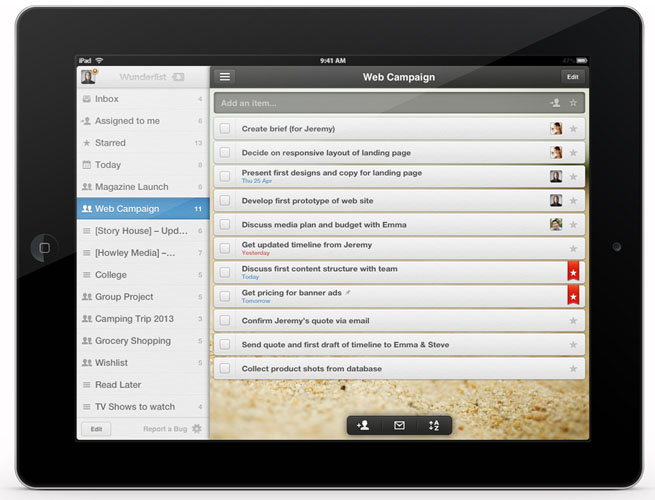 6wunderkinder, the company behind the popular Wunderlist to-do application, has just launched a new paid version of its all-star app with a load of new features.

Wunderlist competes with task apps like Clear, Any.Do, Astrid, and Remember the Milk, but it offers a clean and polished experience for getting work done. 6wunderkinder launched Wunderlist 2 back in December with features that had been missing including recurring tasks. While the apps were nice, the fact that they were free didn’t help the company bring in any cash.

Now it has Wunderlist Pro, which ups the feature list and costs $5 per month. Some of the new features include:

• Assigning: Now you can add an extra level of accountability and assign tasks to your colleagues and friends.
• Unlimited subtasks: Sometimes the task on hand is so big that you need to break it down into
small manageable subtasks. Now you can add as little or as many needed to get the job done.
• Backgrounds: Wunderlist Pro subscribers will have access to eight new backgrounds – from a minimal dark wood and soothing sands to vibrant florals and the Paris cityscape.

6wunderkinder says Wunderlist Pro will continue to receive updates and add new features. The next feature will be the capability to attach files to tasks and share those with colleagues.

Wunderlist Pro is now available on iPhone, iPad, Mac, and the web. Android and Windows versions are coming “soon,” although those users can still use Wunderlist’s very capable free version.