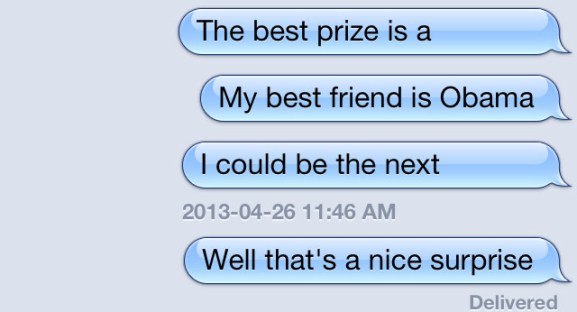 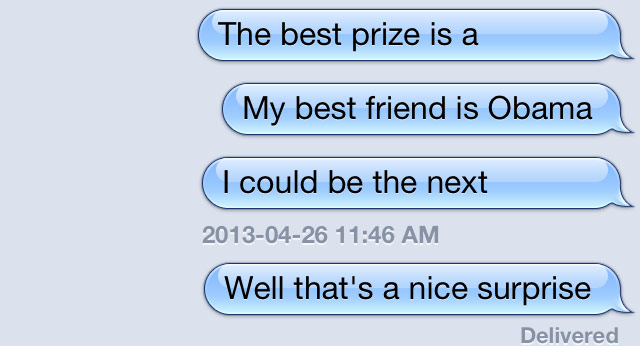 As the Cult of Mac reports, Apple’s messaging services deletes the last word of a few key phrases in iPhone-to-iPhone texts. One is “The best prize is a surprise,” and another is “I could be the next Obama.” The only catch?

You have to leave a trailing space after the phrase.

Mac users have noticed that sending certain messages from the Messages app on a Mac to an iPhone causes similar issues, with the cryptic message “man, why are you here?  Two are in testing places” arriving without the trailing “places.” This seams to be a similar type of issue, but though I could make the iPhone glitches work, so to speak, I could not personally confirm Mac-to-iPhone problem.

One Mac user speculated in Apple’s support forums that the problem may be related to word wrapping:

David, I agree with your intuition that it has to do with how Messages wraps words and perhaps bubble size.  I think that’s why adding/deleting words or changing several words can change whether the bug occurs.

There is probably some very simple and silly explanation for this, and I’m asking Apple about it right now. It’s pretty clear, however, that there is not some kind of hidden, devious preprocessing taking place based on the content of messages which affects how they’re delivered: iPad shows the entire messages as they were sent.