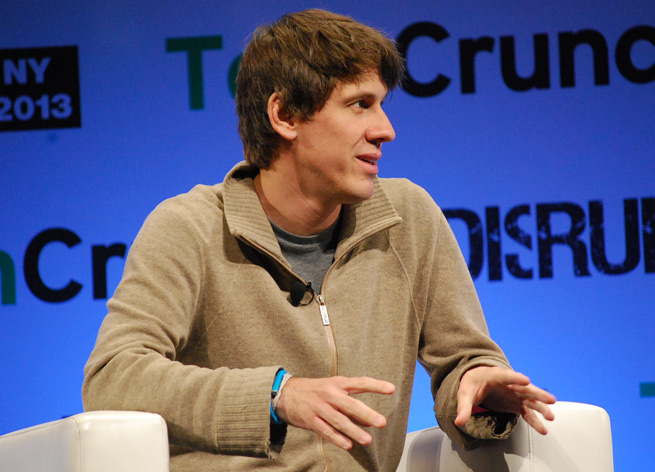 Foursquare CEO Dennis Crowley has faced a lot of criticism recently as his company has struggled to define itself as a full-fledged business. Today, he acknowledged those negative perceptions and defended Foursquare.

“We’re not the shiny new thing anymore,” Crowley said today on stage at TechCrunch Disrupt NY. “We’ve been around for four years. People are still skeptical of whether we can pull this off or not. … We’ve seen other people, like Facebook, go through this as well.”

Foursquare recently raised a $41 million loan to help keep the company growing and heavily shift its focus on helping people explore good places to eat, shop, and more. The loan generated more criticism, but Crowley said the company is growing and generating revenue.

“There’s a lot of perception we’re not growing — that’s totally false,” Crowley said. “A lot of folks think we aren’t generating revenue or that we don’t care about revenue. They’re wrong. … This past March was our highest-generating revenue month so far. We expect to see that going forward.”

One of Crowley’s most prominent recent attacks came from former Square COO Keith Rabois. Crowley said that Rabois is on the board of Yelp. Because Foursquare provides similar data, it’s clear Rabois can’t be considered a fair source.

“If I was on the board of Yelp, I’d be nervous, too,” Crowley said.

The most important thing to Crowley now is building a good product and creating the best location data on the web. Apps like Instagram, Uber, and Path all use Foursquare’s API, and more companies will likely come to rely on that data.

“People get caught up in the story and not the things we’re actually doing,” Crowley said. “Facebook has built the social layer of the Internet. We’re doing the same thing around places. … That’s one of the biggest assets we have.”