Since taking on the role of CEO, Irving has managed to lure executives away from elite companies in a competitive market — based primarily on the dream of what GoDaddy could be. Impressive hires include James Carroll, who previously served as Yahoo’s senior vice president of the consumer and global platform group; and Arnold Blinn, who before becoming GoDaddy’s chief architect spent 16-and-a-half years at Microsoft. 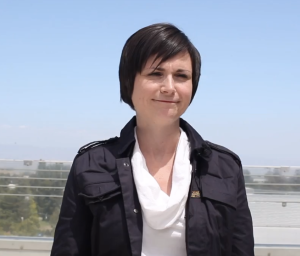 General manager of hosting and security Jeff King left his job as a senior director of at eBay to work for GoDaddy, as did Raj Mukherjee, who worked as a product manager for Google Apps and Google Drive before becoming Go Daddy’s vice president.

These people will all contribute to the next phase of GoDaddy’s development and story as well as its ongoing expansion. Along with them is Elissa Murphy, who made headlines at the beginning of April when she announced her departure as Yahoo’s VP of engineering for cloud services to become GoDaddy’s chief technical officer.

“I didn’t think I would leave Yahoo,” Murphy told VentureBeat. “But when something tugs at your gut, you have to take a second look. Blake came to me with an offer, and I said, ‘Huh?’ But he told me to pay closer attention. I had no idea how much of an opportunity this was. GoDaddy is this diamond in the desert, and you would never guess that it has the financials it does or the relationship with customers. I joined GoDaddy because I want to have an impact on the world.”

Murphy said she is motivated by three things — making a difference, a work environment that enables her to grow and learn, and serendipity. Before Irving reached out to her, Murphy helped a hairstylist friend of hers set up a business using GoDaddy. Her friend had hired a consultant to build her website, who was charging hundreds of dollars for basic work. Murphy was appalled, and using GoDaddy, she built her friend a fully functioning website in a matter of hours. This experience helped her see the potential for GoDaddy to become a major force supporting small business owners around the world.

“You don’t want technology to be a barrier to anyone’s success,” he said. “But how do you enable someone who may not be tech savvy to come online and make a business for themselves? That to me is the American dream — the ability to take an idea and make it a reality.”

When asked about GoDaddy’s less-than-progressive marketing tactics, Murphy said she had not seen the ads but is more concerned with is going on now and in the future than what happened in the past. She worked with Irving before when they were both at Yahoo, and said she has seen him to “amazing things” and is one of the rare people capable of innovating at scale.

As both Murphy and Irving reminded me, the entire world is coming online, and the Internet creates business opportunities for anyone from Silicon Valley entrepreneurs to women in small Mexican villages to my dad, who runs his own law practice. With this growth comes tremendous opportunities to empower people on all ends of the technical and socioeconomic spectrum to forge their own path and support themselves and their families.

GoDaddy has already made significant headway on this front, as its metrics and financials reveal. The roadmap involves efforts to make the existing products even more easy to use, and to continue adding in new features and services. There will also be a greater focus on mobile technology, which is seeing rapid adoption around the world — particularly in emerging markets like sub-Saharan Africa, where people have greater access to smart phones than libraries.

To help realize this vision, Irving opened up new offices in Seattle and Mountain View, Calif., and is exploring new advertising campaigns that maintain an edge, but are more in line with the evolution of the company.

GoDaddy is maturing into a new phase and shedding the garb of its adolescent days for a more mature look. With a new vision, impressive team, and strong position in the market, GoDaddy may be able to realize its full potential.