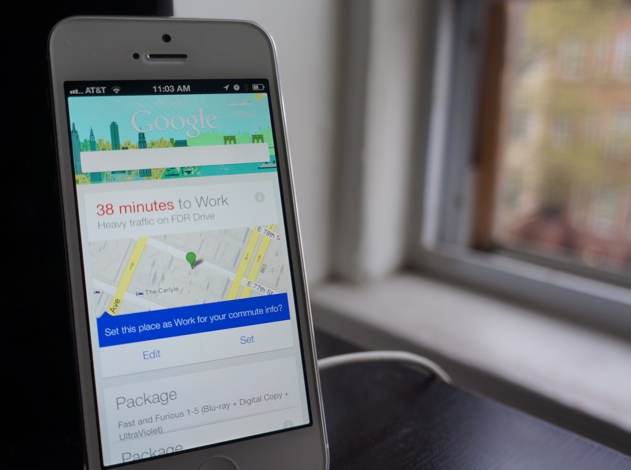 Starting today, iPhone and iPad owners can finally get their hands on Google Now.

Think of it like an evolved form of Apple’s Siri personal assistant baked within Google’s iOS search app. In addition to receiving voice commands (a feature that’s already been present on on Google’s search app for some time), Google Now also presents useful information without your prompting.

It could, for example, tell you an estimated commute time to your office or the status of your package deliveries.

In my brief testing with Google Now on my iPhone 5 and iPad Mini, I found it to be just as easy to use as on Android. Google Now’s Cards (little boxes that it uses to deliver different types of information) are all located on the bottom of Google’s search app. Typically, the software presents the most relevant cards to you — so since I tested it in the morning, it displayed cards for my work commute and weather.

You can tap a card for more information (typically retrieved through a Google search), or swipe to remove them. At first glance, the biggest difference between the iOS and Android versions of Google Now is the available screen space. It’s a bit different juggling Google Now’s cards on the iPhone 5’s 4-inch screen, as most Android phones are approaching 5-inch screens. I also noticed that the Package Card doesn’t show any images for shipments on iOS — but that’s a fairly minor complaint.

Check out my hands-on video below: