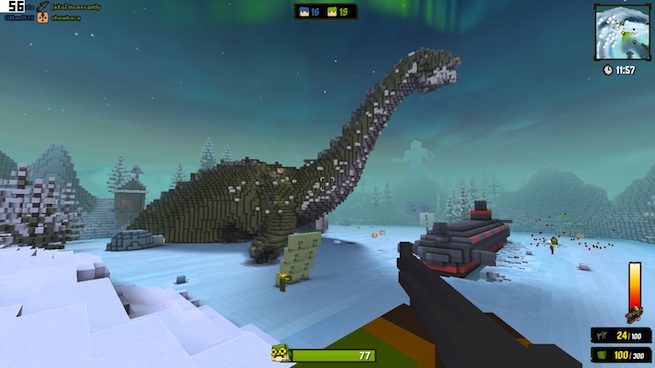 Like movies, games tend to follow certain trends. Action games became more cinematic after the bloody debut of God of War. Cover-based third-person shooters proliferated after the success of Gears of War. And more recently, some indie developers are flocking to the blocky graphics made popular by Minecraft.

Specifically, they’re adding guns and explosions to the basic block-building gameplay. On the PC, at least three first-person multiplayer shooters use this same premise: Jagex’s Ace of Spades (out now for $9.99), Infernum Productions’s Brick-Force (free-to-play as either a download or in your browser), and Exato Game Studios’s Guncraft (releasing this spring for $15). You can carve and shape the battlefield in hundreds of ways in each game, making it hard to tell what the differences are just from looking at videos or screenshots. So we decided to see for ourselves what each one has to offer. 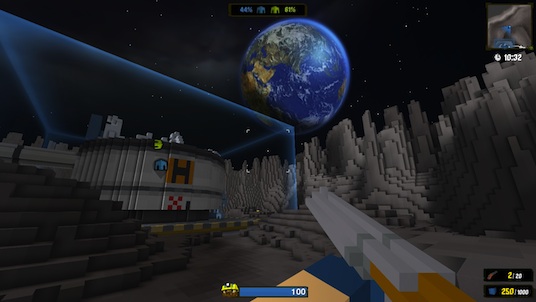 Above: In the lunar base map, you can jump really high and slowly float to the ground due to the decrease in gravity.

Ace of Spades uses a class-based system: The choices are the Miner, Commando, Marksman, or Rocketeer. Though each one comes with their own arsenal, all of them can build and destroy levels using guns and melee weapons like spades and pickaxes (the only mode you can’t build anything in is in “classic” capture-the-flag matches). The Miner can get through more blocks — his spade can take out whole walls at a time — than the others, who can only dismantle one or two blocks per hit.

Besides building with individual blocks, you can use premade structures called prefabs to improve your defenses or to lay down a new path, such as small platforms, towers, and staircases. However, nearly five months after its launch on Steam, Ace of Spades still doesn’t have the tools to let players create their own maps.

Brick-Force has an elegant setup for community-made maps – Infernum highlights a new one every week on its website, and the most popular maps are in regular rotation on the servers. Level building is fairly straightforward: You plop down into a barren landscape and choose different brick types from a menu. You can use specialized abilities and items, like lighting bricks on fire or placing gun turrets, but you can only put down a small number of them. You can also join or create specific “build rooms” so others can come in and help you build a new map.

Guncraft also emphasizes player-made maps. You’ll often find matches based on custom maps rather than those created by the developers. One neat feature in the map editor is that you can generate random terrain like a river, a desert, or frozen tundra. You can even design your own custom prefabs.

What may become the most impressive part of Guncraft is the actual gun crafting, a feature that’s not out yet (it’s coming after launch). By using a similar grid-like interface from the map editor, you can customize the look of your weapon before you bring it online. You’ll have points that you can pour into different stats — vehicle damage, player damage, bullets per shot, and such — but Exato is still working the kinks out, as gun crafting might lead to some seriously overpowered weapons if the studio isn’t careful. 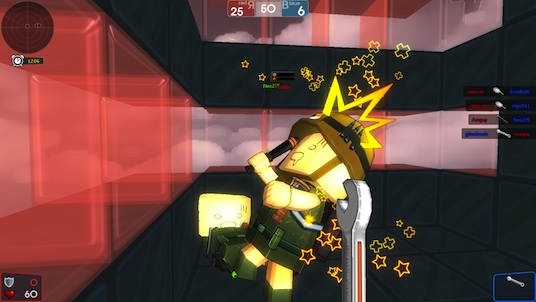 Above: Unlike the blocky soldiers in Ace of Spades and Guncraft, the characters in Brick-Force are more goofy and cartoon-like.

All three of these shooters have the usual selection of multiplayer matches we’ve seen and played countless times before (team deathmatch, capture the flag, and so on), so here’s a look at the modes that stand out for each game:

Despite how overused the undead are in FPS games, Ace of Spade’s Zombie Survival mode isn’t half bad. You only have a minute or two to find a place to hide or defend yourself before someone in the map is randomly picked as the first zombie. The zombies must kill all the survivors before the timer is up.

Once turned into a zombie, you have a few options. Zombies can tear through blocks almost as effectively as the Miner, and they can build their own prefabs. On your minimap, you can also see the heartbeats of the leftover human players, indicating the general area in which they’re hiding. The mode plays out like a frantic game of tagging as you try to build yourself an escape route or dig underground and hope the zombies don’t find you.

Brick-Force’s Build ‘n Destroy mode boils down the genre into its essential ingredients. Teams go through two distinct phases during a match: the first to build, and the second to fight each other and destroy (the host can customize how long each phase lasts), with a semi-transparent wall separating both sides during the building time. After a match ends, the process repeats, but this time you can improve your existing fortifications from the last round. It’s just a shame that not too many people actually play this — you might find a room or two among a sea of team deathmatches when searching the servers.

If you want to take a break from shooting other block people in the face, the best way to spend that time is in Lava Survival. Players must race to the top of a map — or build a new way to get there — before a rising pool of lava consumes them (the speed it rises varies from map to map). But instead of killing other people with your guns, you can freeze them for a few seconds, which is a death sentence if the lava is nearby. The optional hookshot weapon (similar to a grappling hook) is your best friend here, as you can use it to quickly move away from the lava … or accidentally fall into it if you miss your next shot. 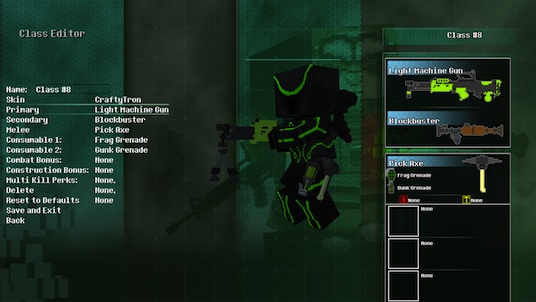 Above: In the class editor, you can customize your weapon loadout, character skin, stat bonuses, and multiplayer perks.

Two guns immediately stand out when you play Ace of Spades: the Drill Cannon and the Snowblower. The former is the exclusive property of the Miner, and he can use it to disintegrate massive rows of blocks in an instant as the drill plows through terrain with ease. It’s not much of an offensive weapon, but it’s fun for making underground tunnels or for weakening your opponent’s base.

The Snowblower, meanwhile, is a handy build tool as well as a deadly weapon. It rapidly fires blocks of ice, making it useful for plugging up holes in your base or building new walls. Any player that gets caught in its path will die within a few shots.

Brick-Force’s in-game store has a lot of odd accessories and silly costumes for you to put on. Want to dress up like Batman with a cowl and a cape? You can do that. You can also buy or rent (using either in-game currency earned from playing or real world money) a jetpack, new materials to build (such as anti-gravity nodes), new guns (you start out with a submachine gun and a pistol), and new melee weapons (including pitchforks and frying pans). While the weapons all have different stats and functions, buying them is more or less an aesthetic choice.

The real stars of Guncraft’s combat are the vehicles. Taking a page from Electronic Arts’ Battlefield series, players can take control of helicopters, massive gunships, tanks, and even Star Wars-like hover bikes. Some maps already come with a few vehicles, but others become accessible only when you gain a certain amount of kills (borrowing Call of Duty’s killstreak bonuses). They don’t always work — helicopters and tanks can sometimes get stuck inside a building or in the ground– but it’s a minor trade-off for the chaos that ensues as blocks and gunfire fly across the screen.