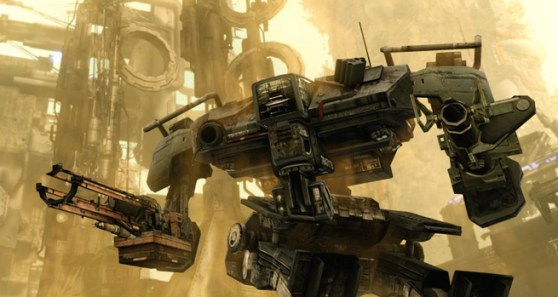 Let’s be real. Everybody wants to jump into the cockpit of a fully loaded, 40-ton robot and pilot it straight into combat. Everybody. That’s core geekdom, right there. It’s in our DNA.

Lucky for us, you won’t find any shortage of heavy-metal enablers. Two big, free-to-play, online-multiplayer mech games — the elder statesman of robo-warfare and a hotshot challenger — are currently running open betas. A third, based on a nearly-forgotten franchise, is on the way.

Best of all, each one takes a different approach to its carnage. Here’s how the contenders break down. 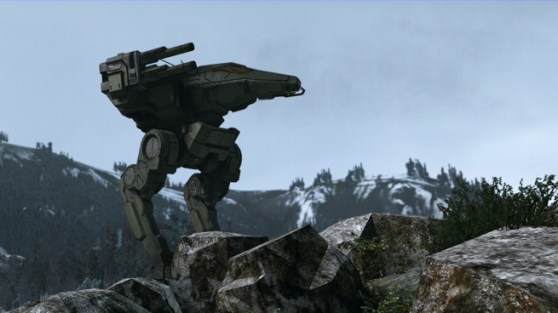 If you’re looking for a gold standard in mecha games, up until very recently, the conversation started and stopped with Mechwarrior. “There’s a lot of good weight with that name,” a producer on a competing game readily told me, and he’s not kidding. Its credentials stretch back to 1989 — further if you throw in Battletech, its pen-and-paper RPG forebear — and good luck finding a PC gamer from that time who doesn’t get a pleasant chill just from hearing the battlemech start-up sequence.

It’s different, but yep … Mechwarrior Online has a start-up sequence.

A decade after the last entry in the franchise, Piranha Games brought the classic back with a lot of its nuances intact and an epic scope few others can match. Moreover, Mechwarrior gives you a real sense of piloting a heavy piece of machinery with lots of guns on it. It’s the mech simulation game, equal parts strategy and twitch. 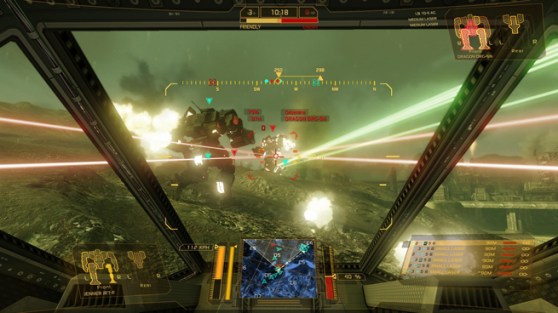 Accordingly, customization plays a major role. Everything about your battlemech revolves around dishing out buckets of pain while managing your heat buildup; overheat, and your unstoppable death machine shuts down, leaving you a sitting duck. You also get to swap out components inside and out, including where your weapons go and in what order they cycle … all the better to follow up high-heat lasers with low-heat ballistic guns and give your mobile suit a second to cool off.

Mechwarrior pays off when you take that custom job into a firefight and see all your decisions pay off. I guarantee nobody wins this game without using their head first.

Bigger mechs give you a bigger platform to build on, but they cut your speed down until a few puny chicken-walkers can literally run circles around you. That gets embarrassing, but it’s a result of pitch-perfect balancing.

In terms of cost, Mechwarrior issues a few free mechs, a few try-before-you-buy “trial mechs” you can take for a limited spin, and then things get expensive, whether you’re spending in-game C-bills or real-world money. A “hero” battlemech can run you anywhere between $17-24, plus a few bucks to open the slot in your mech bay and any cash you want to peel out to pimp your ride. Piranha also offers paid premium time, which boosts your leveling for an hour at a time.

Beyond that, Mechwarrior has another big ace: the franchise’s almost 30 years’ worth of continuity. Piranha leverages it well. When the game leaves beta for live sometime this summer, along with a complete revamp of the user interface and an expansion from 8-vs.-8 matches to 12-vs.-12, it’ll launch an overarching metagame called Community Warfare.

“You can start to play faction-based gameplay,” says Piranha president Russ Bullock. “You can create a mercenary unit and challenge other mercenary units. Or if you want to join one of the great houses of the Inner Sphere, you can work your way up the ranks.” Bullock’s team is also looking into supporting pirate classes who just make trouble.

“In the final phase, you’ll start to battle for territory in the Inner Sphere,” says Bullock. “A lot of the border worlds between the great houses will be up for grabs.” And certain perks go with controlling that territory … perks that vanish if another house takes a planet away. 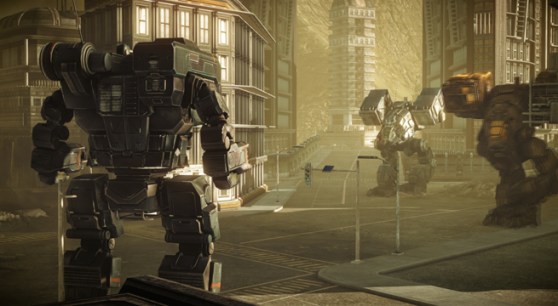 Here’s the other thing. Mechwarrior Online unfolds in real time, so every minute that passes in April 2013 is a minute passing in April 3049. That plays into a little something Piranha creative director Bryan Ekman calls “the integrity of the timeline.”

“There is a certain set of prescripted events that have to happen,” says Ekman. Meaning roughly six months after Mechwarrior Online goes live, the Inner Sphere experiences one of the more cataclysmic events in the franchise’s history — the Clan Invasion. And then those planets the great houses fought over start falling to the clans, leaving players either fending off the invaders or fighting over what’s left. “It’s so dynamic,” Ekman adds. “So much happens in a very short amount of time. We felt it would be a fantastic way to keep players engaged. They’ll see the changes daily, participate in those changes, and affect how the universe looks.”

Those events will drive Mechwarrior Online for the next two years. Consider that ideal ground for an aspiring pilot in their fully customized walking tank who wants the weight of history behind them.

Or maybe you just want to strap into a giant robot and light some fools up. Let me tell you about Hawken.