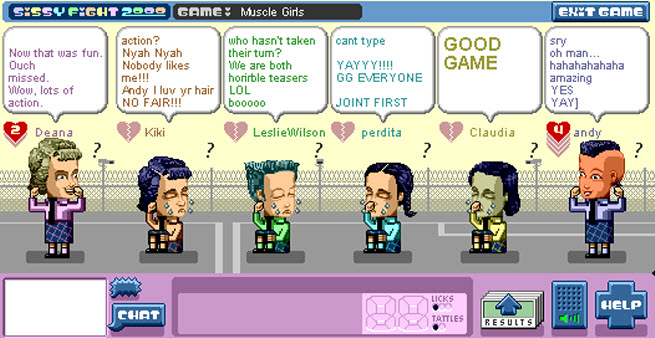 Back in the year 1999, a trio of game designers created a title called Sissyfight 2000. It was a turn-based strategy game that reproduced the antics of “sissyfighting” by girls on a school playground. Now three members of the original team are launching a Kickstarter project to fund an online remake, which they will then post as an open-source title. 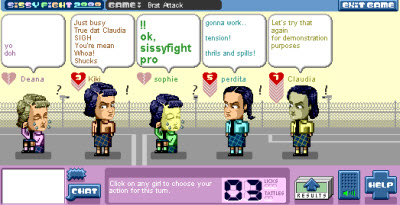 At the same time, they hope to create a conversation around the game’s evidently “sexist” characterizations of girl fighting. Sissyfight 2000 was groundbreaking as a social game when it was created by a team of Word.com online magazine staff. The question is whether today’s Internet community is ready to understand the message behind Sissyfight and whether it’s sexist or not.

The team plans to bring back the game with indie game site Venus Patrol, which will have a new arcade section. The original Sissyfight 2000 went offline years ago. Instead of developing a sequel, the team decided to bring the original multiplayer game back for everyone to play online. It will be available for free and open source, so anyone can create their own version of Sissyfight.

I participated in a playtest of the game, and it was spectacularly fun. The player tries to dominate the playground in a duel with five others. Each becomes a bratty little girl who has to deal with bullies, tattle-tales, and shifting friend allegiances. It sheds light “on a different kind of schoolyard violence — the emotion and social violence of the Mean Girls variety.” The original game was built in Adobe’s Shockwave and was pretty plain in its animation.

The goal of the game is to reduce the self-esteem points (the little hearts) of your opponents. When one or two girls are left, they win. With each turn, every player picks a single action without knowing what move everyone else has selected. You can “scratch” another player for one point of damage. You can “tease,” which is twice as effective as a scratch, as long as two or more girls tease the same target. A “grab” does no damage but interrupts your target’s action. A “tattle” is a powerful attack that does three damage points to everyone, but if two players tattle at the same time, then only the tattlers get in trouble. You can only tattle twice in a game. You can “lick your lolly” and get two self-esteem points back. But you can only do that three times per match. Lastly, you can “cower,” which defends you from grabs and scratches.

I actually won three matches and lost a couple as well. I found that my fellow players were quite aggressive, so I let them slug it out while I cowered or stepped back from the action. Then, when they had expended their efforts, I stepped in with a powerful “tease” attack. I found that I could take my rivals off-guard. But the same strategy never worked twice, and players could overtly collude with each other through the chat system. They could also launch verbal feints by doing the opposite of what they said they were going to do. 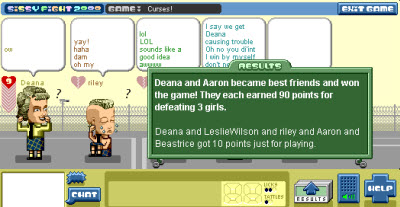 In many ways, Sissyfight was ahead of its time, a social game before social-networking games became popular. Chatting with other players is an important part of the strategy. In fact, Sissyfight has been used to teach game design students for nearly a decade in college courses, workshops, and the Game Developers Workshop. Zimmerman, one of the original designers, has been an active member of the indie game development community, and he later became the founder of Gamelab, the company that developed the hit title Diner Dash (for PlayFirst).

All of your team members are potential enemies or allies.

The developer plans to use the Kickstarter money to recode the game to make it playable under today’s browsers. Bhatnagar, the original programmer, will head the recoding effort. He is now a media artist who exhibits around the world. His sound sculpture will be exhibited this year at the Palais de Tokyo Museum in Paris and at the Tinguely Museum in Basel. Clark, based in New York, has worked on games with companies like Lego, Gamelab, and Fresh Planet. Zimmerman is on the faculty at the NYU Game Center and is an independent game designer.

Now, the intentional sexism of the game bothered me. I felt like I would never show this game to my daughters, who probably wouldn’t understand the intentional irony in the sexism. If a game looks sexist and plays sexist, then it must be sexist, right? I complained to Zimmerman that the game hadn’t kept up with the times and that it was wrong not to have boys fighting like sissies, as they are perfectly capable of doing so on the playground.

Zimmerman replied, “This is a great question. In fact, Sissyfight [which he spells SiSSYFiGHT] has an intentional gender imbalance. It is a conscious intervention into the culture of games — at least it was in the late 90s, and it still feels like an interesting statement today. Sissyfight is very much a feminist video game — in that it consciously grapples with ideas around the social construction of gender. I wrote about some of this in Rules of Play — how Sissyfight creates a kind of female identity which is neither princess-to-be-rescued nor action-hero-in-tight-shorts.”

In the FAQ for the game, the team acknowledges that a game where the goal is to “bully and humiliate other girls” seems a little wrong. It is intended for adults to reflect back on “adolescent struggles with dark humor, morbid nostalgia, and maybe a touch of vengeful revisionism.” It also depicts the aforementioned emotional violence.

“We think of it as a game where another version of the main goal is to survive a hostile social environment, which encourages tearing each other apart — the kind that innumerable girls experience growing up — with a shred of your own self-esteem intact and with a friend by your side,” the FAQ read. “Skilled Sissyfight players discovered early on that the key to doing this was trust and support between players — most importantly, knowing who you should trust and support. Some of the best players even developed strategies — including social ones! — that could win without ever teasing or scratching another player.”

The lesson from the game is that the top players were the ones who formed strong friendships and cooperative strategies. You can’t play as a boy by design, as the team “wanted to create a very different kind of gendered space than what we saw in blockbuster games of the 90s.” 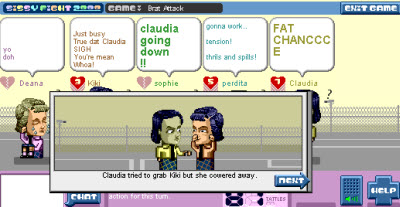 Clark said, “Sissyfight is definitely a weird and troubling game that doesn’t have an ‘easy’ political message or takeaway. If we were trying to create a game to help with messaging for a political campaign, teach ethics in a middle school classroom, or support a NGO’s unambiguously positive mission, I would be very worried. But Sissyfight isn’t meant to be any of those things — if anything, it’s more like a piece of public art meant for a community of players to react to and mess around in.”

She added, “Back in 1999, we took our own experiences of adolescent social conflict and reactions to ‘men-only’ gameplay of the 90s and set out to make a strange, ambiguous space that can be interpreted in a lot of different ways — positive and negative. We got superficial responses and easy reactions then, too — people asking why we were trying to teach little girls to be mean to each other or insisting we were being reverse-sexist by excluding boys, for example. We have plenty to say about any easy reaction. I’m a lifelong feminist, wrote for years for a feminist blog, and helped found a gender-justice nonprofit, so I’m more than happy for a lively debate about Sissyfight on the merits. But of course, if someone with an easy reaction doesn’t want to hear the nuances, what can you do?”

She also said, “I think of the easy reactions as similar to when Fox News portrayed Mass Effect as a game about lesbian alien sex; if you play the game and unpack it, there’s a lot more going on. Sissyfight is a community game, shaped by what players do with it far more than an ‘authored’ work like Mass Effect, so it’s even more slippery and open to interpretation. The kind of conflict in Sissyfight is definitely a culturally gendered kind conflict — it’s seen by society as ‘girl fighting,’ and that’s part of what we’re trying to portray, drop all kinds of gamers right into the middle of, and raise questions about. If a player’s first experience with Sissyfight doesn’t make them raise their eyebrow and have at least a twinge of ‘WTF?!,’ then we haven’t done our job as well as we could.”

In closing, Zimmerman said, “Sissyfight is a game about sexism, although that doesn’t make it sexist. Perhaps it’s a kind comparison, but the game is like a Chris Rock show — critically smart, extremely entertaining, and intentionally inappropriate. On a simple level, the fact that you can only be a girl in Sissyfight is a counter-balance to all the games where you can only be male. In my mind, that kind of unspoken choice by game developers is a kind of stealth sexism — although we don’t usually label those games as sexist. That’s our intention, anyway. It also goes without saying that the way culture creates meaning is subtle and subjective.”

Now I’m not sure what to think. My 16-year-old says about my explanation of Sissyfight, “That’s stupid.” My wife thinks the creators are out to create intentional controversy. I think their message just might go over a lot of heads. But I could be wrong. They may be brilliant game designers, or they just may be shining me on. What do you think? Take our poll below and check out the full description on the Kickstarter page.