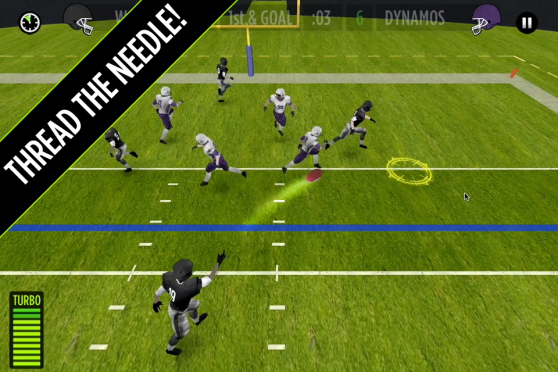 In another universe, Philadelphia Eagles quarterback Michael Vick would likely have his own triple-A video game. In 2004, the superstar QB had a Nike sponsorship and made the cover of Electronic Arts’ Madden NFL 2004.

In 2007, those lucrative deals disintegrated when Vick pled guilty to animal-cruelty charges for running a dog-fighting ring. He served 21 months in prison, and his future in the NFL and as a brand ambassador was in doubt.

The QB did make his way back to the NFL, but his brand hasn’t made a full recovery. Vick probably won’t ever make the cover of Madden again. Association with the Eagles quarterback invariably brings out a number of critics who will never forgive him.

The promise of that kind of bad publicity is enough to keep companies far away —  well, most companies.

Developer KBJGames decided that Vick was worth the risk.

Earlier this month, KBJGames released Mike Vick: GameTime on the iOS App Store. It’s a touch-based 4-on-4 passing game that has players building a team around the titular QB.

“We knew we had to capture Mike’s electricity and bring that excitement to the game,”  Josh of KBJGames (who asked we not use his full name for fear that it would interfere with his other work) told GamesBeat. “Mike is known for being a mobile quarterback, but his style has evolved. He’s more known as a pass-first QB now.”

Using that philosophy, KBJGames built an objective-based passing game that requires players to reach a certain amount of points to win a game.

“We worked hard to make sure players could have a meaningful experience in three minutes,” said Josh.

Gamers responded well to the app. Vick has a large number of people who will jeer him no matter what he does, but he also had a massive number of fans who can’t get enough of him. Those people pushed the game to the top of the iOS App Store in early April.

GamesBeat took some time to talk with the developer about how it got started with Vick, and what it’s like to work with someone who is so hated and so loved.

From T-shirts to the top of the App Store

GameTime began as a much smaller idea. Two years ago, Josh was running a T-shirt company with his friend. He would approach football players like former Cincinnati Bengals’ wide receiver Chad Johnson with shirt ideas that he would then sell on the players’ behalf.

After a while, he wanted to approach his idol, Michael Vick, about doing a T-shirt. Vick, however, didn’t really have time for some small-time guy with a small-time T-shirt company.

“We weren’t getting any response with the T-shirt,” said Josh. “Then one day I was playing Madden, and I realized that was the big idea.”

Josh went back to Vick with a pitch for a video game in hand.

“I caught up with him in person in Philadelphia,” said Josh. “I pitched him on the idea. I told him there’s a void in the football game market on mobile. Football games are fun, but Madden is too many characters on the screen, and [iPhone’s] Backbreaker is just kickoff returns.”

“I told him we should make a 4-on-4 game that we design from scratch on the phone — and he loved the idea,” said Josh.

With Vick on his side and an idea in his pocket, everything was back on track — except Josh doesn’t really know how to make games. His next hurdle was to find someone to actually develop the concept into a real game.

“The budget was really small, so I reached out to a lot of developers, but I quickly found a guy I really liked,” said Josh.

That guy is iOS developer Damian Griffin, who made the small indie football game Pocket Passer QB for iOS.

“Pocket Passer is a really fun game in the App Store,” said Josh. “It wasn’t really big, but I played it and knew Damian had some real talent. You could tell there was something there, but it was just missing some key elements.”

Josh quickly settled on working with Griffin. He wanted to use Pocket Passer as the shell, but Josh had some ideas for the interface and player progression that he thought could take Pocket Passer to the next level.

“Damien came down to Cincinnati, and we locked ourselves in a room,” said Josh. “We went through  everything. We figured out what kind of controls we should have; how long the games should be; and what kind of progression players should experience.” 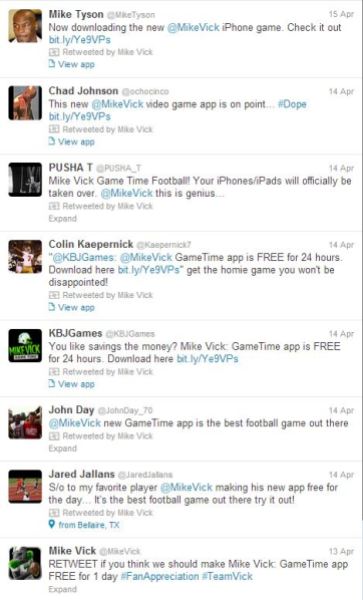 Now that they had the game, the next step was finding the audience. For Josh, this meant taking a shotgun-style approach to marketing.

To launch the app, KBJ sent out 100,000 emails to everyone registered on Mike Vick’s fan club. The studio also sent a text message from Vick to a lot of those same fans. Then the studio took over Vick’s Twitter account, with its 1.788 million followers, and began sending out links to the game.

That was enough to move the $.99 game up into the top 10 paid apps on the iTunes App Store, but it was also only the beginning.

“In mid-April, we made GameTime free,” Josh said. “We want as many people playing as possible. That’s when the downloads really started to creep up.”

“It was this great viral moment where everyone took notice that Mike had an app,” said Josh. “It was great timing. We chose mid-April t0 make it free because it was after the Super Bowl and before the draft. There’s not a lot of NFL-related media going on that time.”

GameTime is now in the top 20 most-downloaded free sports games on the App Store, and it is still rising.

What about the haters?

KBJGames and Mike Vick made a good football game (it has 4.5 star rating on 175 reviews on iTunes). It’s finding an audience with over 5 million games played, and the developer wants to have the Android version out in about five months. 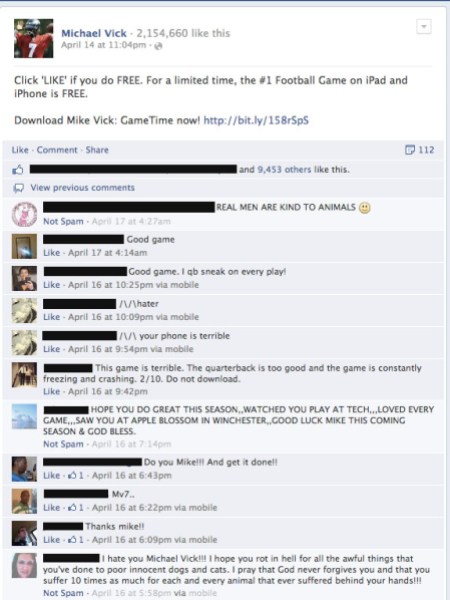 Well, the thing about making poor choices is that they tend to follow you around. Vick’s are certainly following him.

“We knew the game would cause a lot of controversy,” said Josh. “It’s Mike Vick. Any time he tries to take a step forward, he gets people trying to shout him down. We don’t ever directly reply to anyone, but we just made sure that we made a quality game that represents us well and Mike’s brand well — the game speaks for itself.”

Vick’s critics have downloaded this game just so they could give it a negative review. They also give KBJ a hard time on Twitter and Facebook, according to Josh, but he and Griffin just wants to make the game as good as it can be.

“We’re just doing right by Mike and by his fans,” he said. “The response that we get from his fans on Twitter is enormous. They love the game.”

Finally, Josh told GamesBeat that he wants this game to be another step in rehabilitating Vick’s brand. The QB is never going to make the cover of Madden again, but that doesn’t matter. Plenty of people will still play a game about Vick, and with the iOS App Store and small developers, Josh was able to make that possible.