While Hulu’s owners are still being wishy-washy on whether they want to sell the company or keep it, the service itself is doing quite well.

The company announced today that it has surpassed 4 million paid subscribers of its Hulu Plus service, which lets you watch content on mobile devices and set-top boxes and gives you access to plenty of content that’s not available to those with a free account. This quarter also saw the fastest rate of subscriber growth, with nearly a million people signing up between January and March. The company’s acting CEO, Andy Forssell, also said the overall paid subscribers doubled in 2012 from its roughly 2 million subscribers the same time last year.

And people are apparently watching more videos, too. Hulu revealed that in the last quarter over 1 billion hours of content were viewed. (For comparison, Netflix is seeing over a billion hours of videos streamed per month.) 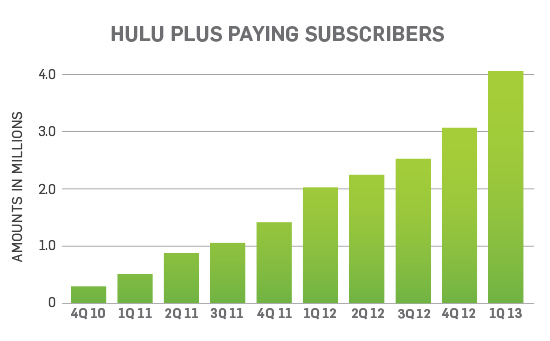 The company also saw record growth in people watching from mobile devices, which Hulu estimates will account for 15 percent of all viewing over the next year, while viewing from set-top boxes and smart TVs will be 29 percent.

As for advertising, Hulu said its viewers tend to stick around for 45 minutes per session without skipping advertisements. And for the record, I do believe Hulu on this front because it’s currently a huge pain in the ass to employ an ad blocking tool while viewing Hulu on the Web. You can do it, but you still have to sit through the endless pause of nothingness where a commercial would be, which is oftentimes longer than the actual commercial would have been. (And in some cases the video won’t even load.) Citing comScore data, Hulu also said it delivers 1 out of every 3 premium video ads in the U.S. I’m guessing “premium ads” means anything  you’d reasonably be able to watch during regular television viewing on broadcast or cable networks.

Hulu also highlighted its commitment to producing more original content, which is extremely crucial for the company looking ahead. If Hulu were to be bought by a new company that wasn’t in the business of producing content, that could put a serious strain on Hulu’s future ability to remain profitable while providing programming people want to see. (Music services are currently struggling with this.)

Anyway, Hulu’s upcoming slate of original shows includes half-hour western comedy Quick Draw, East Los High, The Awesomes, Behind the Mask, The Wrong Mans, and Mother Up!, as well as new seasons of  Pramface, Prisoners of War, The Only Way is Essex, Braquo, and Moone Boy.