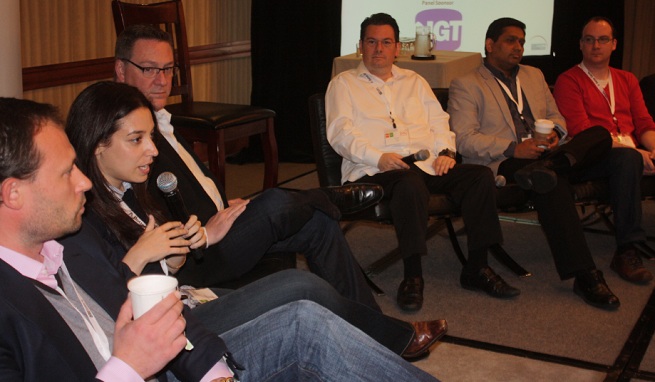 Last week’s Social Casino Summit in San Francisco highlighted what appears to be a very narrow and crazy part of the game market: social casino games. But this sector has more than 100 startups and big companies fighting with each other, and it is one of the most lucrative, fast-growing, and disruptive segments of gaming. In the discussion that follows, we hope you’ll see why.

I moderated a debate about the blurring lines between social casino games, where players pay real money for virtual casino chips that cannot be cashed out, and online gambling, where you can bet, lose, and win real money. The industries are headed for a collision, and some think that regulators will have to sort through thorny issues that result from the conflict. What happens, for instance, when consumers become confused over what is a real-money gambling game and what is not? Regulators may very well reach different conclusions on a state by state or region by region basis.

Here is part one of our conversation. It has been edited. I’ve moved a section identifying each speaker to the bottom of the story.

Dean Takahashi: Let’s jump right into something that can get the blood flowing here. Jez, should social gaming be regulated? [laughter]

Jez San: Very good question. I personally believe — this is only a personal opinion — that for the social gaming industry to avoid regulation, it needs to be seen to be taking more social responsibility. There are a lot of issues that people are raising, particularly in the press, that the industry could address without having to be regulated. In the regulated real-money world, games have to be fair. They have to be purely random. They have to protect the players from themselves. They have to be very socially responsible. A priority is social responsibility.

So should social gaming companies follow some of those steps to avoid being regulated? Because if they let it be a free-for-all, there are going to be bad actors out there that are going to take the piss.

Sumit Gupta: Let’s look at what happened in Japan a few years back. It’s not related to casino, but they had a mechanic called “complete gacha,” which essentially used some kind of game mechanics to make users spend and spend.

Takahashi: Complete gacha was like a slot machine. Can you explain it more?

Gupta: It got out of hand, and the government intervened.

Keustermans: It was basically a collection mechanic. You want to complete your collection, but there’s quite a few rare items, so you have to spend loads and loads of money on buying more and more collectibles. People were chasing a jackpot because if you managed to complete your collection, you could be super powerful. The result was that a lot of users spent meaningful amounts of money chasing it. As Sumit said, it got a bit out of hand.

Takahashi: The Japanese government intervened, and stock prices on some of these companies fell hard.

Gupta: The point is that casino games do not necessarily have the highest level of paying users. There are many other games, other game genres, where people are spending more money than in casino games. Who is leading this move to regulation? It’s interesting to see. Is it the entire industry that’s going to get regulated because this kind of thing also happened in other genres in Japan? Or is it just going to happen to casino games because we’re talking about — in the future — hopefully merging online and offline and opening up online casinos in the U.S. and creating users who, because they’re used to playing casino games on the social side of things, will spend more money that ends up in a lot of different hands?

Takahashi: I think there is a safe solution that they came up with where there is a form of gacha that’s okay. What did they wind up with there? The components that drove players to spend so much money were what they got rid of, some of the elements of chance.

Keustermans: They limited the amount of money underage players could spend in those games. This is specifically in Japan and Korea, but if users under 18 still spend more, then the game company has to pay them back, basically. That was part of the solution as well.

Josh Grant: To continue on the point, the examples that we hear about in the press — the one in Japan, and there was an action in Florida earlier this week to shut down these Internet cafes that providers operate fraudulently, claiming they were contributing money to veterans’ charities when in fact they were not — I feel like a lot of the big case studies and alarm-bell warnings that we see really amount to fraud. They’re taking advantage of underage kids. They’re doing things that are clearly wrong outside of the casino mechanic or the gaming mechanic.

Takahashi: And there are already laws against these things.

Grant: Right, and perpetrators should be punished, and that’s why we have governments and state attorneys general. You could have a separate discussion around game mechanics and the extent to which they touch on certain people’s competitive or collecting or decorating behavior. That exists in all games. RockYou has had a zoo-animal collecting game on Facebook for several years, and we have VIPs who have spent more money than whales [big spenders or high-rollers] in casinos. It’s two separate issues, but obviously if people are breaking the law — if they’re misleading through their marketing or delivering an unsafe product or selling a mature product to 13-year-olds — those are clearly wrong.

San: But in the real-money world, regulations protect the vulnerable. The vulnerable aren’t always children or problem gamblers. They’re also just regular people who overspend their intentions. In the real-money world, you can voluntarily choose your spending limit, and then when you hit it, you don’t go above it. Your whales in the social-gaming world, they might actually unintentionally spend a lot. If you empower them with tools so they can set their own limits, maybe the regulators wouldn’t worry about you. But the regulators probably do worry about you because you don’t know who your whales are.

Takahashi: What if your business model is driven by the whales, though?

San: If your whales are rich, it doesn’t really matter. But if the whale is some starving housewife somewhere, you’re going to be in the headlines.

Keustermans: The problem here is that there’s a lot of anecdotal data. Jez has one concern, someone else has another concern, but nobody really knows anything. There’s no data showing that there is a problem, that people are overspending.

San: You still get headlines. You still get the Daily Mail saying, “This kid spend 1,000 pounds on his iPad without his parents knowing.”

Gupta: But now you’re going from casino games to social gaming. From here, where do we stop? Should we stop people from creating an account?