Updated May 1 to clarify quotes

“We’re the top-ranked e-reading app in the all major app stores,” Lau says.

Wattpad is the largest community for sharing and reading stories online, Lau said, calling it a “library in your pocket.” Indie authors and some well-known writers post stories and books on the network, often in a serialized format, and readers get free access to read and comment on them. It’s an experience that Lau likens to watching TV episodes. 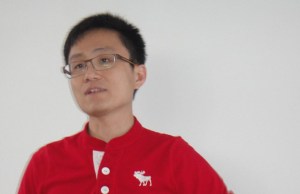 “Attention spans are getting shorter and short, so to make long-form writing work, we break it up.”

The scope and scale of Wattpad is staggering in an era during which supposedly, as Steve Jobs famously said, no-one reads anymore. Five million times a month, however, someone comments on a Wattpad story. 15 million times, someone has uploaded a story or a book to Wattpad. And those 15 million monthly unique visitors spend a massive average of 30 minutes per session reading.

“We are still in userbase building phase,” Lau said. “Once we have that critical mass we can start monetization. 15 million is a number I should be proud of, but we are only still only one percent of where we want to be.”

Where he wants to be is similar in size to a Facebook or a Twitter: hundreds of millions, or even billions. And how he plans to get there is by doing more of what Wattpad has done to date: via indie authors and, increasingly, branded books and name-brand authors.

Indie authors like Jordan Lynde, a college freshman with 100,000 fans, close to a hundred million reads, and over 100,000 comments. Lynde posts chapters of multiple ongoing books regularly. And Abigail Gibbs, a teenager who recently parlayed her Wattpad success into a six-figure payday for a three book deal from Harper Collins.

Lau is also leveraging branded opportunities like working with the UK’s One Direction boy band. Sony, the band’s label, hired a Wattpad writer to write a five-chapter story — one for each of the singers — that reached one million reads and brought 100,000 new users to WattPad. And established authors like Cory Doctorow and Margaret Atwood have been publishing to the site recently.

That’s perhaps where the monetization will come from at some point, Lau says, who sees YouTube’s progression over the past decade as an example for Wattpad to follow.

“Over time you will start to see premium content,” he says. “Ultimately we want to create more value.”

With 15 million regular monthly readers, the reading community with investments from Union Square Venture, Khosla Ventures, and Jerry Yang seems to already be creating quite a lot.

Disclosure: I’m in Toronto at the invitation of Ontario’s ministry of economic development, which is paying for my trip. My reporting, however, is my own.