You can’t access Facebook in China. Twitter is unheard of. And Google … well, Google has left China, and China isn’t exactly writing a Taylor Swift ex-boyfriend song about the world’s largest search engine.

So social media and search engine optimization in China is a whole different ballgame. But an important one to play for any American company that wants a presence in the Middle Kingdom, according to Bin Lee and Iris Huang of Glogou.

Glogou has been helping U.S companies sell into China — a “reverse Alibaba,” the company calls itself — for about five years. In a natural progression, last year the company started to explore helping Western corporations build their online profiles in China in addition to selling their products.

The reasons Western companies could need such a service have to do with the difficulties Western companies can face in China, such as what happened to Apple over the past few months — negative press in government-owned media outlets and coordinated astroturf social media attacks. And of course, reasons such as those behind Google’s exit from the Chinese market. Basically, if the Chinese government doesn’t approve of what you’re doing, you’re not going to be successful in China.

But not all the challenges of doing business in China can be chalked up to political problems. In the Chinese government’s efforts to accomplish its goals — whatever they are — there’s a lot of collateral damage. 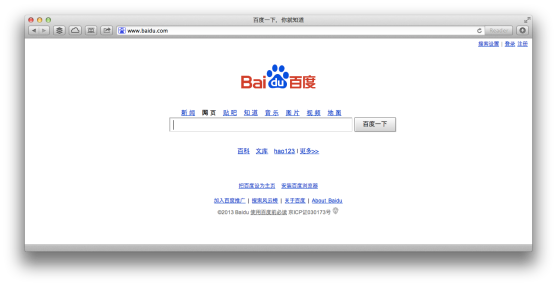 Above: China’s Baidu search engine is very Google, circa 2005

“Many US sites are not accessible from China,” says Huang. “It’s amazing how many … often that’s not because of political reasons, often simply due to technical reasons.”

So Glogou provides site monitoring services based in China, confirming that your site is accessible from mainland China and building you a small Chinese site if it is not. And the company provides social media monitoring: checking Weibo for mentions of your company and brand, and monitoring sentiment. That’s a big deal, because Weibo has more users than Twitter and almost as many users as Facebook.

That is due to the fact that social media is Chinese citizens’ key political outlet, Lee says. While the government does censor certain keywords, posts, and sometimes entire topics — such as the pigs floating in the river in Shanghai, which had two million search results before disappearing entirely — it has to grant a certain level of freedom, he told me. Which makes social media a key outlet for political as well as personal sentiment.

But it’s not just about social media — search engine optimization is also key, and SEO is an entirely different matter in China than in the U.S.

“We also help U.S. businesses to make sure they are included on Baidu,” Huang told me. “Because if you’re not on Baidu, you’re basically invisible in China.”

In addition to SEO services, the company has built an English interface for Baidu’s Chinese-language ad platform. Baidu has advertising products roughly analogous to Google’s AdWords and AdSense products, which until now have been almost entirely off-limits to English-speaking users.

Which means knowing what the Chinese think of you and your product is probably a good thing if you’re trying to sell into their country.