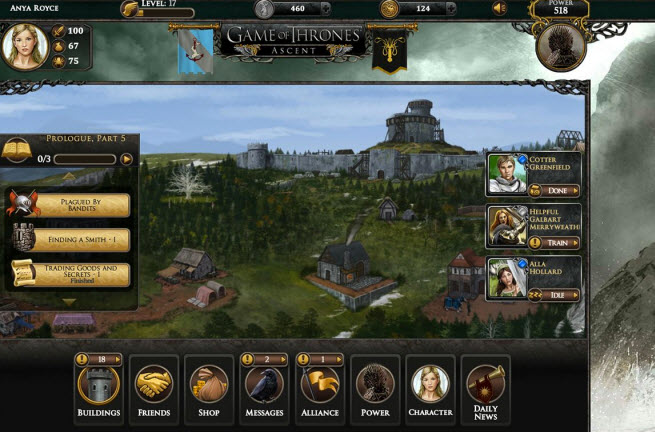 Zynga continues to expand from its social-game roots with plans to publish Disruptor Beam’s Game of Thrones: Ascent social game.

In partnership with HBO, Disruptor Beam is making a social game based on the epic television series. Zynga will publish the third-party game to its audience of 250 million monthly active users, said Rob Dyer, the vice president of partner publishing at San Francisco-based Zynga.

Disruptor Beam CEO and founder Jon Radoff said that his company’s goal since 2010 has been to “disrupt” the world of social games with what he claims are immersive gameplay experiences based on the worlds and stories that players love most.

“Disruptor Beam has done an outstanding job with the game’s design – creating an engaging and authentic experience that appeals to midcore and casual players alike and reflects the incredible world of Game of Thrones,” Dyer said.

In Ascent, you lead the life of a noble during a time of upheaval, similar to the storyline in the books and TV series. You swear allegiance to a Great House (such as the Lannisters), select your lineage, secure your holdings, develop your lands and reputation, and assign sworn swords to quests. Social aspects include making alliances with other players and even marriage pacts.

Game of Thrones is moving fast in the world of transmedia. It’s the first book of the “A Song of Ice and Fire” series George R.R. Martin (though many people now associate that books name with the entire series) and brought to life by HBO as a cable TV show. It has traditional role-playing and strategy games for consoles and PCs. Game of Thrones: Ascent launched on Feb. 21 on Facebook in an open beta test. Since that time, more than 500,000 users have installed the game, which places them in the world of Westeros. The studio has been refining the game mechanics and features, and it hopes the partnership with Zynga will expose the title to many more potential fans.

“One thing that I’ve learned in my years of starting and building companies is that gaming companies cannot always be solely responsible for 100 percent of their ‘hits,'” Radoff said.