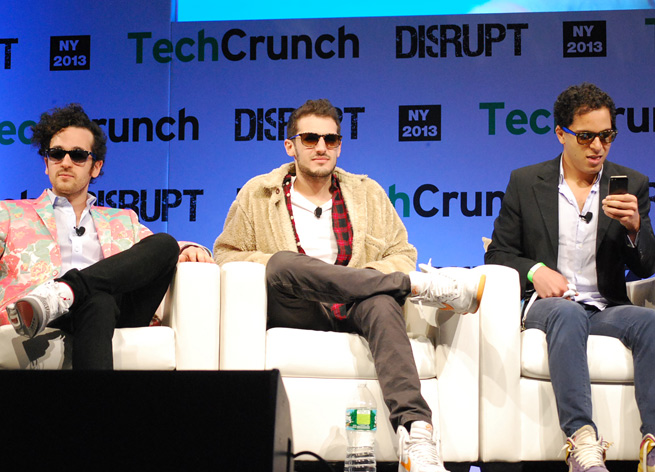 Most startup founders fresh off raising $15 million from Andreessen Horowitz would show up at a tech conference ready to prove themselves further. Not the people behind Rap Genius.

Brooklyn-based Rap Genius offers a service for annotating such things as music lyrics, books, and speeches. In many ways, it’s a Wikipedia for hip-hop and other forms of media.

The company’s founders showed up today at TechCrunch Disrupt NY to talk about their startup and announce the launch of a new feature called News Genius. This new tool exists as a Twitter account for now, but it shows that the site’s annotation tech can also be used to give more context to current events, such as the FDA’s approval on Plan B for females 15 and up.

While the cofounders could have used today to explain why popular events and news need Rap-Genius-style annotation, the conversation on stage was a bizarre mix of observations and an apology to Mark Zuckerberg over the time he (sort of) suggested Zuck should fellate one of the founders.

Here are some of the things said on stage today by Rap Genius cofounder Mahbod Moghadam (left) when he wasn’t rapping:

“The secret ingredient of Rap Genius is love. We often tell people Rap Genius was built in love on rails.”

“It’s not just a code. It’s certainly not just a business. It’s a religion. It’s a cult. It’s often called a Ponzi scheme of knowledge.”

“I was thinking Taliban Genius could be a subgenre.”

“Ben [Horowitz] is the Rap Genius godfather, you know. He’s true fam. We consider him a bro. It’s not like he’s some Uncle Moneybags. … Ben, we love you, dog.”

“We take Vyvanse sometimes to turn up, at least I do. One of the reasons is I’m allergic to coffee. But also, you take one of those and it makes you feel so powerful.”

“We would do naked Adderall. This is before Y Combinator. It was just a germ. We’d stay there the whole day and work. We’d come up with fun theories. We came up with a theory that if you got a woman pregnant while on Adderall, the baby would be smarter. But only if the woman is also on Adderall.”

“It’s not easy becoming the biggest site in the world, you know? You gotta take it step by step.”

“I’ve been working on [annotating] War and Peace. One of my goals is I’m going to explain all of War and Peace. It brings the pleasure back to reading.”

“[Saying what I did about Mark Zuckerberg and Warren Buffett was] the dumbest thing I’ve ever done in my life. I love those guys. Mark Zuckerberg. Like, I met my last girlfriend on Facebook. Meeting him was such an honor.”

“I think Rap Genius is gonna be bigger than Facebook someday. But I don’t say that in a beefy competition way. … It’s all love. I’ve got nothing but respect. I’m sorry Zuck. I love you, dog.”

“We really do give a fuck. … We could sell this shit and go become alcoholics living on island. But the reason we’re doing this is to educate the kids. I consider this a tuition-free university.”

“If you wanna ball major, you gotta drink the fucking Kool-Aid.”

And here are a few quips from cofounder Tom Lehman (right):

“I never drank coffee, but then I got into it, and that’s a powerful drug. … It’s crazy and you drank it, and everyone’s pretending it’s a normal thing. And then everyone says, ‘I’ve got to run to the bathroom. I’ve had too much coffee.’ Is that peeing or what is that? I don’t know.”

“Heroku, man, ah. A lot of love, a lot of hate. Beautiful service. I’ve still got love for them. Rap Genius couldn’t have gotten off the ground without it. They pulled a little bit of a jack move. … They represented their product a certain way and it didn’t actually work that way and it made us waste a lot of time. But then we got to write that cool blog post with the graphs. … It turned into mega beef.”

Maybe it’s all an act to get people’s attention and be more memorable in a huge sea of startups. Or maybe these guys are actually real-life Jean Ralphios.

Check out the full conversation below: