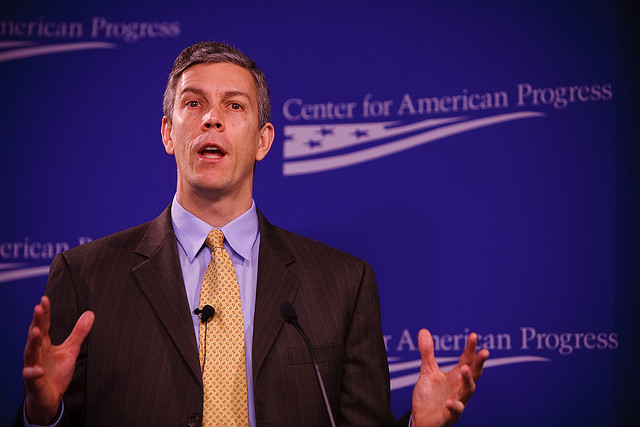 BURLINGAME, Calif. — U.S. Education Secretary Arne Duncan spoke frankly to a roomful of Silicon Valley entrepreneurs and investors about the state of the nation’s education system.

At the NewSchools Summit this afternoon, the former head of Chicago’s public schools said he believes that technology not only improves access to education but also graduation rates. In a discussion with Steve Jobs’ widow, Laurene Powell Jobs, Duncan referred to many schools and universities as glorified “dropout factories” and called for teachers and parents to “knock at his door or the governor’s door” and demand better for their children. 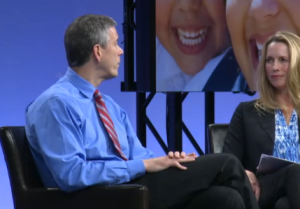 Above: U.S. Education Secretary Arne Duncan in conversation with Laurene Powell Jobs, the president of the Board of College Track.

Duncan has made significant steps in his tenure as education secretary — although his efforts have incurred significant criticism from the National Education Association. Duncan has secured increases in Pell grants for students to attend college, and he is a supporter of innovation through programs like “Race to the Top” and “Investing in Innovation.” Additionally, he has helped secure an additional $10 billion to avoid teacher layoffs and $500 million for a national early learning competition.

But these efforts are not nearly enough, and Duncan conceded that “we have so far to go.”

“Until parents say my school needs to change, politicians will continue to talk the talk but not walk the walk,” he said. Duncan said he’s frustrated by the way that the education dialogue has been consistently shoved to the corner and hasn’t been the center of a national conversation. “Education wasn’t a big issue in the [presidential] debates,” he noted.

What can technology entrepreneurs do to help?

Massive open online courses, dubbed MOOCs, have captured the attention of educators, state legislators — and motivated investors to open their check books. As we reported, a bill was recently introduced in the California State Senate that would force the state’s public colleges and universities to give credit for online courses.

Online courses are traditionally the realm of higher education, but Duncan views an opportunity for expansion to K-12. Stanford and MIT professors are currently teaching courses like basic algebra, Spanish, and molecular physics on Coursera. Why can’t middle school teachers?

Duncan asked, “Can we find ways to scale the amazing teachers we do have?” He noted that there should be a way for an inspirational teacher at a charter school in Tennessee to instruct 50,000 a day. “The MOOCs are at the top of my list,” he said.

Related: Ed-tech entrepreneur Sal Khan spoke earlier this morning at the New Schools Ventures Summit about his vision for education.

Technology can also help kids with special needs, and Duncan suggested that the new crop of apps can help them “break through.” He didn’t proffer any specific examples, but he suggested that parents need to start using richer language with their children, and certain educational games can help.

From a policy perspective, Duncan said his plans are to drastically increase salaries to $120,000 to $150,000 a year for the best teachers and $200,000 for principals. “I’m trying to make an investment,” he said, as good teachers are responsible for turning out future leaders who will contribute to the economy.

After addressing a number of ongoing problems (schools closing down, the burdensome cost of college, and more), Duncan concluded the discussion on an optimistic note. “I think what we’re going to do in the next few years will change education opportunity for future generations,” he said.