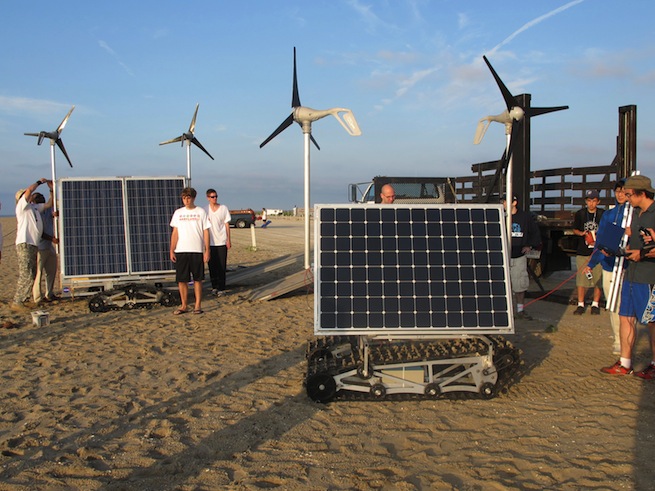 NASA has a new rover in town, but this one won’t be leaving our atmosphere. Instead it’s going to Greenland to study the effects of this atmosphere on a giant piece of ice.

It’s called GROVER, and no, it isn’t blue or fuzzy (though, wouldn’t that be awesome?). Grover stands for Goddard Remotely Operated Vehicle for Exploration and Researcher and for now, it’s a prototype that will be treated like any rover intended for space. It was built by a team of students starting in 2010 at NASA’s Goddard Space Flight Center. Grover is now at Boise State being “fine-tuned” before deployment.

It’s not a small guy either. Referenced as “tank-like,” Grover weighs 800 pounds and stands six feet tall. It is powered by two solar panels that sit on top of the rover in an upside-down V-shape. This is meant to capture both light from the sun and its reflection off the ice. Scientists hope to control Grover remotely from their desks, but they will first start out over a Wi-Fi connection, which must be accessed within a three-mile range. In the future, that will move to satellite, which will expand Grover’s range of travel and improve the timeliness of incoming data.

You’ll find GROVER in Greenland soon, checking whether a new layer of ice has built up since unusually high temperatures melted 97 percent of its surface in 2012.

But don’t worry, Grover won’t get lonely. A new rover built by students at Dartmouth College named Cool Robot will join the mission in June.

“GROVER is just like a spacecraft, but it has to operate on the ground,” Goddard Engineering Bootcamp manager Michael Comberiate said in NASA’s video on the rover. “It has to survive unattended for months in a hostile environment, with just a few commands to interrogate it and find out its status and give it some directions for how to accommodate situations it finds itself in.”