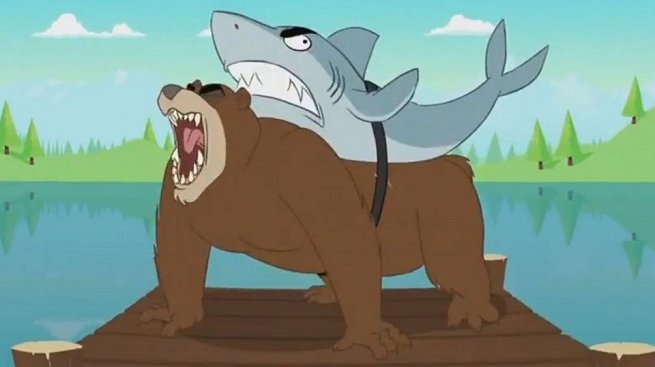 A comedy website just made a video game and released it on Nintendo’s 3DS. That’s kind of weird, right? Well, CollegeHumor doesn’t think so. In fact, that organization thinks it makes perfect sense.

The game is BearShark, a perpetual-running game available now for $3.99 in the 3DS eShop. BearShark is also a CollegeHumor comedy series that the company first released through the Nintendo Video app on the 3D handheld.

“We have a longstanding relationship with Nintendo,” CollegeHumor chief executive officer Paul Greenberg told GamesBeat. “They approached us about two years ago to help them make the 3DS more than just a game machine. They commissioned a series called Dinosaur Office, which quickly became the most popular series on the 3DS.”

In fact, each episode racked up millions of views on the Nintendo Video app.

“It was so popular that Nintendo ended up ordering three seasons of it,” said Greenberg. “Then they came to us a while later to order another series.”

That ended up becoming BearShark, which is a series of slapstick cartoons that have a bear and a shark teaming up to eat a dude. Only this time, Nintendo wanted CollegeHumor to find a way to extend the audience and come up with more content than just the episodes.

CollegeHumor talked through around some ideas. They were thinking about doing some behind-the-scenes stuff, but in the end the company realized that the only thing that really made sense for Nintendo’s gaming platform was an original game.

“So we commissioned BearShark the game,” said Greenberg. “It’s actually based on the same animation that BearShark [the cartoon] uses.”

In the 3DS endless runner, players control the human star of the series as he tries to avoid death by bear and/or shark. I’ve spent a bit of time with it, and BearShark is a simple, colorful one-touch game. It doesn’t do anything surprising, but it’s also a competent take on the well-worn genre.

“We’re really excited,” said Greenberg. “It really fulfills CollegeHumor’s mission to be a multimedia, multiplatform studio that wants to reach its audience wherever they are.”

For Greenberg, the BearShark game gave his team an opportunity to express their talents in a different way. With the website and its videos, CollegeHumor is a comedy-first company, but with the game they were more focused on making something fun rather than funny.

“It’s hard to be funny in a video game,” said Greenberg. “We didn’t want to try too hard. We just wanted to give something that our audience would find enjoyable and something that is appropriate to the medium.”

CollegeHumor wants to use this game to create more fans of its properties while simultaneously offering up something new to its existing viewers. Greenberg expects people searching through the eShop to discover the game and then to want to track down the videos.

If this works, gamers can probably expect a lot more games from CollegeHumor.

“We will definitely be launching more games based on characters and content that we created,” said Greenberg. “We want to create properties and then exploit it. Over time, we’ll continue to build those out as cross-over entities.”